Here Are 5 of the Sleaziest, Most Underhanded GOP Voter Suppression Campaigns That 'Would Make Jim Crow Blush' 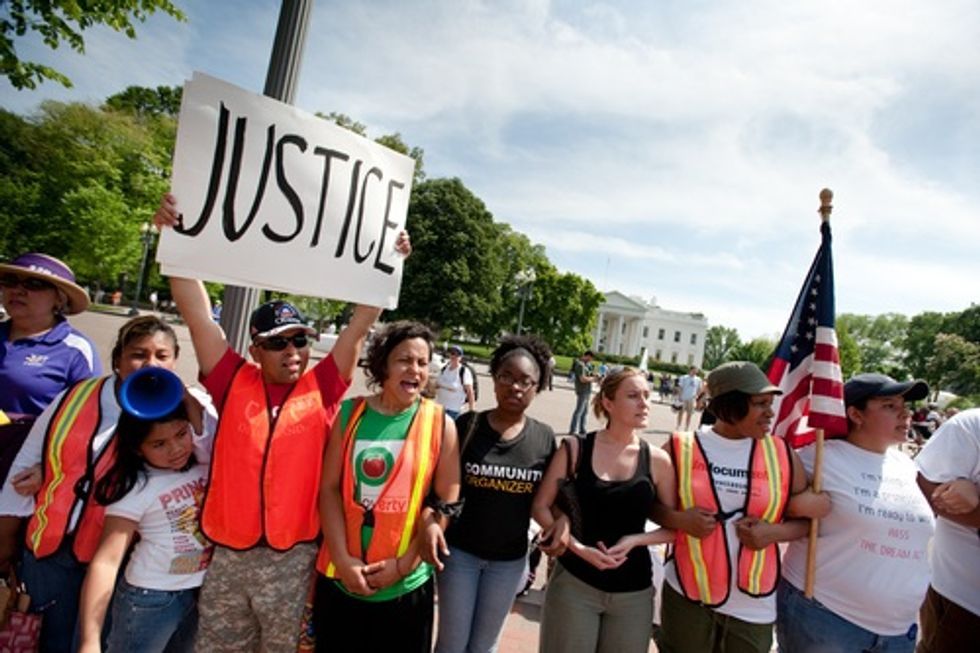 If Stacey Abrams had been around in the 1960s and entered Lester Maddox’s restaurant in Atlanta, she probably wouldn’t have been served. Maddox, who served as governor of Georgia from 1967-1971, was a segregationist Democrat who proudly supported Jim Crow Laws and defied the Civil Rights Act of 1964 by refusing to serve black customers in his Atlanta restaurant. But much has changed in Georgia since then, and the 44-year-old Abrams stands a very good chance of becoming Georgia’s first female African-American governor—that is, if GOP gubernatorial candidate Brian Kemp doesn’t succeed in disenfranchising black voters in his state. Channeling the ghost of Lester Maddox, Kemp (Georgia’s secretary of state) has suspended the voter registration of 53,000 Georgia residents—about 70% of whom happen to be African-American. And Kemp’s effort to defeat Abrams by keeping her likely supporters away from the polls is so egregious and underhanded that the Rev. Al Sharpton has asserted that “Jim Crow would blush” over his actions.

Kemp, however, is hardly alone when it comes to Republican voter suppression efforts. Whether it’s Mexicans in Arizona, Native Americans in North Dakota or African-Americans in Wisconsin and Georgia, Republicans have been doing everything in their power to prevent people of color from voting.

Here are five other places where the GOP has carried out sleazy, racist voter suppression campaigns that, to use Al Sharpton’s words, would make Jim Crow blush.

North Carolina, which is about 22% black, has become a swing state: Barack Obama won North Carolina in the 2008 presidential election but narrowly lost it to former Massachusetts Gov. Mitt Romney in 2012. And North Carolina Republicans, knowing that blacks generally tend to vote Democratic, passed a voter ID law that affected African-Americans disproportionally in that state. Dale Ho, director of the ACLU Voting Rights Project, denounced the law as “an ugly chapter in voter suppression” that targeted black voters with “almost surgical precision.”

Like New Mexico, Colorado and Nevada, Arizona is a swing state—although it’s a swing state that leans more Republican than its neighbors. In 2016, Democrat Hillary Clinton lost Arizona to President Donald Trump by only 3.5% compared to 9% in Texas or 26% in Nebraska. And Republicans are fearful that if enough Latinos vote Democrat in Arizona, that state could turn more Democratic.

In August, the American Civil Liberties Union (ACLU) filed a federal lawsuit against Arizona Secretary of State Michele Reagan—asserting that Arizona is failing to keep voters’ registration addresses up to date. According to Ceridwen Cherry (a staff attorney for the ACLU Voting Rights Project), “the state of Arizona is violating the National Voter Registration Act, putting more than 500,000 voters at risk of being disenfranchised.” Further, the number of polling stations in Maricopa County, Arizona has been greatly reduced, going from at least 200 in 2012 to 60 in 2016—and many of the closings just happen to be in heavily Latino areas.

When Hillary Clinton narrowly lost Wisconsin to Trump in 2016, it was the first time since 1984 that a Democratic presidential candidate had lost in that state. Even Michael Dukakis carried Wisconsin in 1988. Clinton dropped the ball in Wisconsin, which she never even visited during her campaign. But the voter suppression efforts taking place in Wisconsin under Gov. Scott Walker certainly didn’t help either. When Wisconsin passed its racist voter ID law in 2011, blacks were 50% less likely than whites to have the required form of ID needed to vote. And according to Mother Jones, the law “helped tip the 2016 election to Donald Trump.”

Although Texas leans Republican, it is by no means the reddest of the red states: Hillary Clinton lost Texas by 9% in Texas compared to 26% in Nebraska. Major cities like Houston, El Paso, Austin and Dallas lean Democrat, and even though Sen. Ted Cruz will likely be reelected, Democrat Beto O’Rourke has trailed him by single digits in most polls. Fearful that African-Americans and Latinos could help Democrats gain ground in Texas, Republicans passed a racist voter ID law in that state in 2013—and Mother Jones found that black and Latino voters were two to three times more likely than whites to lack the ID the law required.