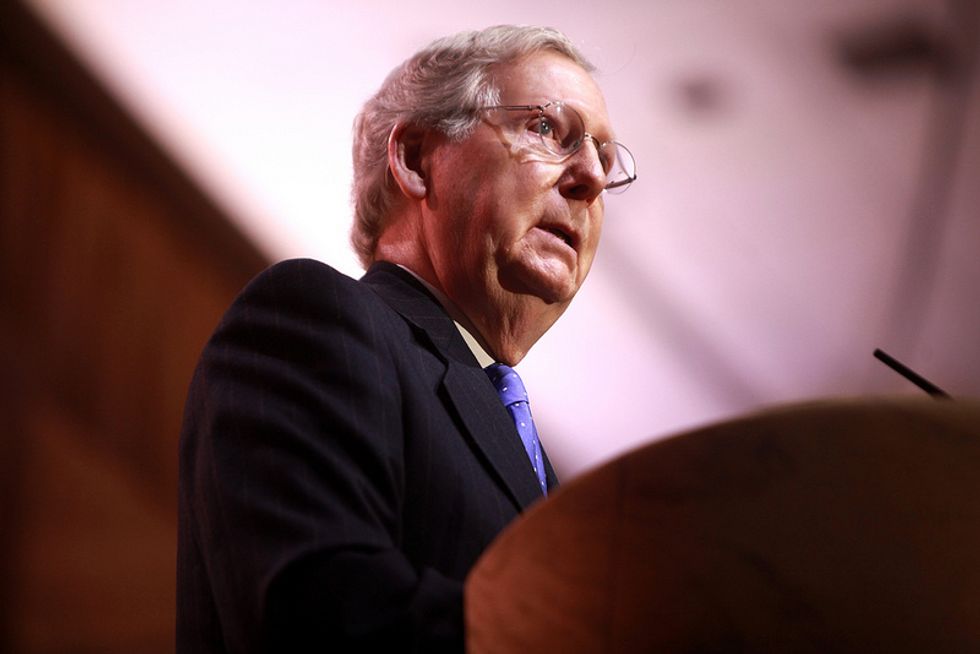 Everyone who cares about their Social Security, Medicare or Medicaid needs to vote on November 6. If Republican politicians and the donors who own them retain full control of Congress, they are determined to finally succeed in their longstanding goal of ending all three programs.

Right-wing extremists have never been subtle about that goal. As the fight over President George W. Bush’s 2005 proposal to privatize Social Security was heating up, a leaked memorandum from Bush’s director of strategic initiatives, dated January 3, 2005, and marked “not for attribution,” put the fight over the program in context: “this will be one of the most important conservative undertakings of modern times.” If that weren’t clear enough, the memorandum concluded with a startling and refreshingly frank assessment: “For the first time in six decades, the Social Security battle is one we can win.”

Republican leaders are so eager to cut benefits that they seem incapable of hiding their plans to go after Social Security, Medicare and Medicaid. The latest person to let the veil slip is none other than powerful Senate Republican Leader Mitch McConnell (R-KY).

He just stated that spending on so-called “entitlement programs” must be “addressed.” That is Washington insider code for ending Social Security, Medicare and Medicaid.

The shocking part of McConnell’s statement, and those made by other powerful Republicans, is not the content, but the timing. Right-wingers have opposed Social Security and Medicare ever since they were first created. But because these programs enjoy overwhelming support from the American people, including voters of all political affiliations, they do not normally talk about their plans for benefit cuts three weeks before an election. If this is how they are talking now, imagine how emboldened they will be if they ride out the blue wave and keep control of Congress!

Since losing the Bush privatization fight, these Republicans have worked hard to avoid political accountability, through using fast-tracked, unaccountable supercommittees, commissions or other forms of bipartisan cover. But with Democrats now in favor of expanding not cutting these vital programs, Republican elites may see their latest chance slipping away. And they are determined not to let that happen. Like the proverbial child who murders his parents and then pleads for leniency because he is an orphan, today’s Republicans are planning to use the cost of their tax giveaway to the wealthy as the excuse to do what they have wanted to do for so long.

Time and time again, McConnell has shown that the only thing he truly cares about is power. And he has been rewarded for his ruthlessness. He was able to steal a Supreme Court appointment in 2016. If Congress remains in Republican control, he will do anything he has to do to ensure that he destroys Social Security, Medicare and Medicaid. On November 7, 2018, he will be as far from the next election as you can get. And he and the other Republicans will have no guarantee that they will keep control of the White House and Congress after 2020.

Donald Trump understands the politics better than the rest of his cronies. In his typical effort to project his true views onto his political opponents, he signed an op-ed claiming that Democrats are the ones who want to destroy Medicare. He has also made the equally absurd claim that Democrats are out to destroy Social Security. (Thinking about this transparent projection brings to mind his retort, when Hillary Clinton accused him of being a Russian puppet: “No puppet; you’re the puppet!”)

Notwithstanding Trump’s efforts, the other Republicans just cannot control themselves. By being undisciplined enough to announce, immediately before an election, their plans for Social Security, Medicare and Medicaid cuts, McConnell and the others have made the choice for voters crystal clear.

It is a clichÃ© to say whatever election is coming up is the most important in our lifetimes. But this time, it is no hyperbole. There are many, many reasons to make sure you vote. A principal reason is to protect Social Security, Medicare and Medicaid.

If Democrats take back the House of Representatives, they can block McConnell’s plans for cuts. If they take back the Senate, McConnell will lose his control—and Democrats can hold floor votes on expanding Social Security and Medicare, forcing every single senator and House member to go on the record for or against these programs.

Please understand that I am not a knee-jerk Democrat. In the 1970s, I worked for a Republican senator, and in the early 1980s, I was the top assistant to conservative economist Alan Greenspan in his position as chair of the bipartisan Social Security reform commission. Mainstream Republican presidents, from Dwight D. Eisenhower to George H.W. Bush, have supported Social Security, Medicare and Medicaid. But no more.

So, I implore all supporters of Social Security, Medicare and Medicaid: Vote this November.