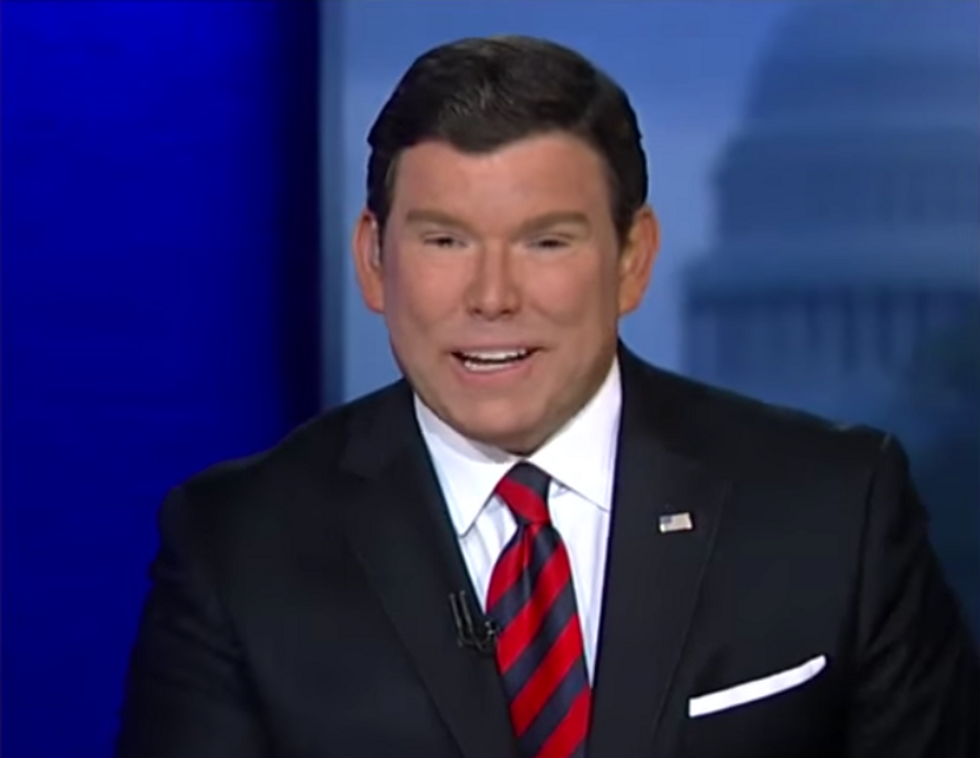 Fox News' Bret Baier took to Reddit Friday afternoon to engage with users in an "Ask Me Anything" forum. Predictably, it didn't go well.

Many of the comments were just outright insults, such as this from user Moonbeanie: "So how does it feel to work for a foreigner attacking your own country from within?"

One user, ArchPower, just asked simply: "How do you sleep at night?" (Baier answered: 'well.')

Some of Baier's answers were reasonable, such as when he dismissed President Donald Trump's notion that the press is the "enemy of the people." However, Baier did give the president some cover by saying he "clarifies" his position to say that the only enemy of the people is "fake news" — which is just a term he applies to news he doesn't like.

And Baier's response really seemed disingenuous when he was asked what the difference is between Fox News and other networks.

"News at fox tries very hard to be balanced and to present all sides," he said. "I think some news shows elsewhere have lost a little of that balance."

This remark is laughable on its face — and Baier should know better.

The best and most thoughtful question in the thread drew on a specific incident in the runup to the 2016 election. User PortaRossa asked:

Six days before the 2016 election, you claimed on your show that you had heard from multiple FBI sources that 'with 99% accuracy' Hillary Clinton's email servers had been hacked by 'five foreign intelligence agencies', and followed it up the next day with the report that there would likely be an indictment of Clinton -- then the frontrunner candidate for the nation's highest office -- for misdeeds at the State Department and at the Clinton Foundation, 'barring some obstruction' (a claim you later also made on Twitter). You were later forced to make an on-air retraction to these claims, saying there was no strong evidence for either, only 'working assumptions'.

The original reporting was accurate and we stood by it. 1) the FBI was operating on the assumption that the servers could have been hacked.. experts believed that it was very possible considering the lack of security and 2) there WAS an FBI investigation into the Clinton Foundation that was open and continuing. The problem came when I was asked a hypothetical on Brit Hume's 7pm show about if she won and this went forward what would happen? and I said then prosecutors would still likely move to an indictment if they had the evidence. I clarified immediately after getting off set. and 2 - I retracted that it wasn't a certainty that the servers had been hacked.. because they had no digital footprints (although the FBI still believed it was highly likely)... and I retracted that there was any talk of an indictment.. that was an answer to a hypothetical if it moved forward -- which was ill advised. It wasn't the investigators who would make that call.

And NO.. I don't. thanks question answered.

This response shows how weak Baier's claim that the "news" side of Fox News (as opposed to the "opinion" side) is some kind of paragon of balance. Baier's claim to only be responding to a hypothetical is vapid and silly, especially since the transcript makes clear that Hume wasn't asking a hypothetical question. It's also not clear how he can claim "the original reporting was accurate" when he had to retract significant parts of it.

It was also clear, as many people outside the FBI long argued, that there was little chance of a Clinton indictment at any point because there was little reason to think she had acted criminally. Were Baier and Fox News serious about being a "balanced" source of information, these facts and perspectives might have better informed their reporting and avoided this serious error.