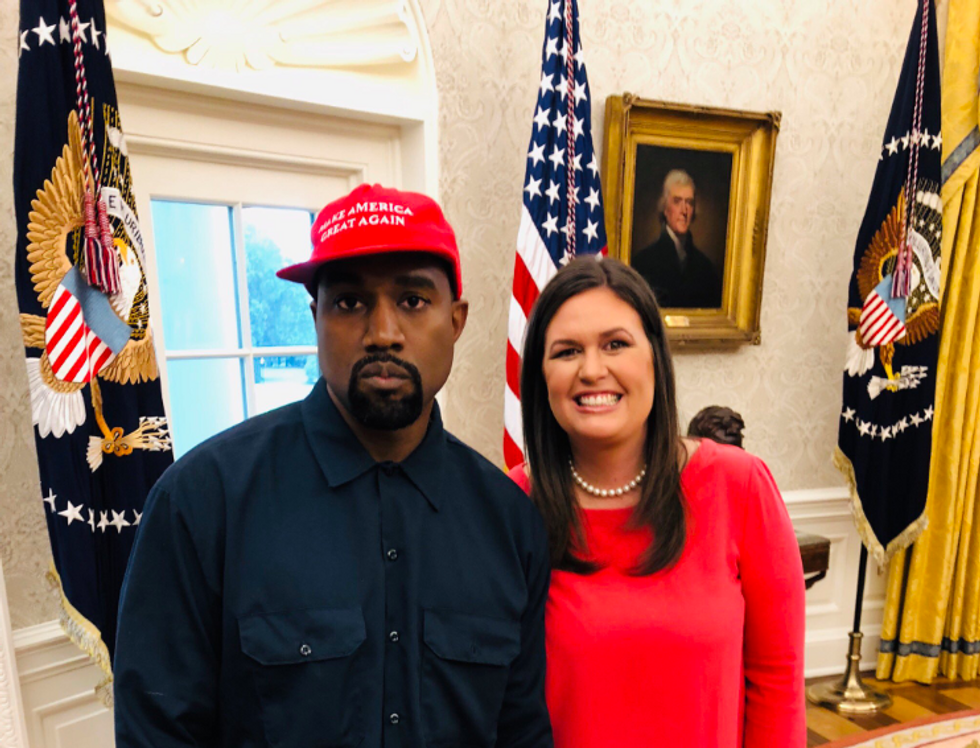 Citizens for Responsibility and Ethics in Washington (CREW) has filed a complaint with the Office of Special Counsel, alleging that Sarah Huckabee Sanders—White House press secretary under the Trump Administration and daughter of former Arkansas Gov. Mike Huckabee—violated the Hatch Act of 1939 by tweeting a photo of herself with rapper Kanye West.

Passed when Franklin Delano Roosevelt was president, the Hatch Act of 1939 was named after Sen. Carl Hatch of New Mexico and forbids most employees of the executive branch of the federal government from certain overtly partisan activities or communications (exceptions include the president and the vice-president). And CREW is alleging that Sanders’ tweet violated the Hatch Act because West was wearing a pro-Trump “Make America Great Again” hat in the photo.

Of course, Twitter didn’t exist back in 1939. But it was amended in 2012 and now applies to more modern forms of technology—such as Twitter and other social media outlets.

In an October 12 press release, CREW Executive Director Noah Bookbinder is quoted as saying, “This administration does not seem to care about what the law says when it comes to ethics issues like using official positions for politics. How many investigations and findings of violations are needed until this administration takes action to stop the misuse of government resources for political activity?”

Hip-hop, over the years, has had its share of outspoken rappers who leaned to the left politically—including Public Enemy, Ice-T, KRS-1, N.W.A and 2 Black 2 Strong. During the Obama years, Peruvian rapper Immortal Technique showed up at Occupy Wall Street events and was a vocal supporter of the Occupy movement. But right-wing rappers have been the exception rather than the rule in hip-hop—and Kanye West has inspired a lot of debate in hip-hop with his unapologetic support of Donald Trump’s presidency.

On Thursday, October 11, West visited the Oval Office for a meeting with Trump. West told the president that wearing his Make America Great Again hat “made me feel like Superman,” and the two of them discussed issues that included prison reform and mental health.