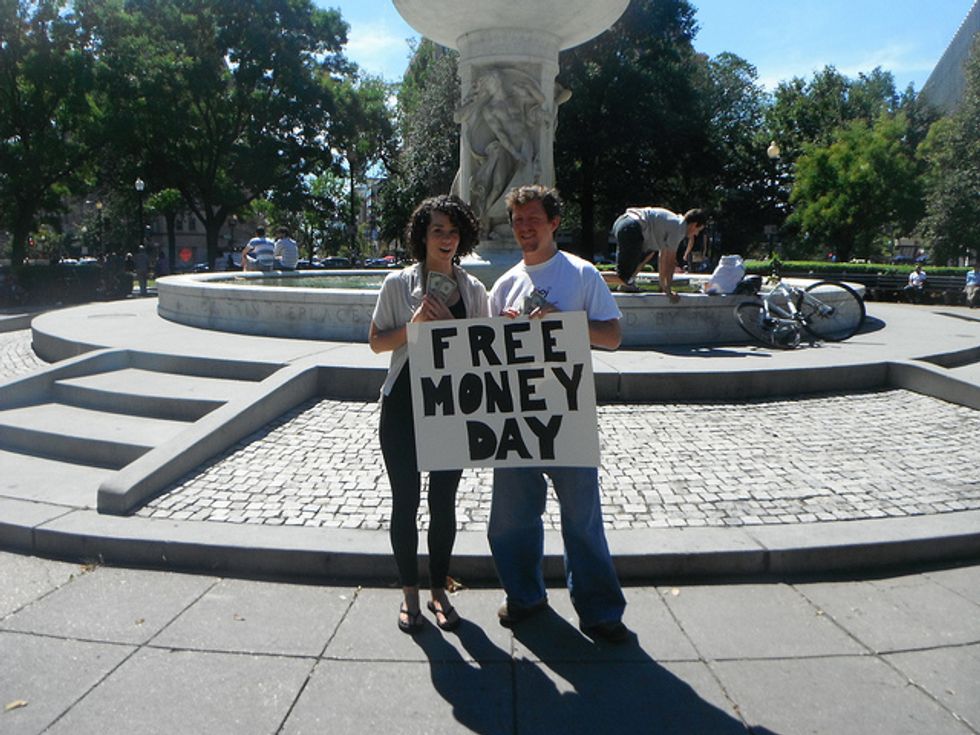 At the same time that Amazon CEO Jeff Bezos has a net worth of $160 billion, 44 million adults in the U.S. collectively owe $1.5 trillion in student loan debt. The mass disparity between extravagant wealth and immense debt is, as Donnie Maclurcan calls it, both a fundamental flaw and characteristic of capitalism.

“Because money is lent into existence where credit and debt are created simultaneously, you actually have a situation where, [when] money concentrates in a capitalist society, the debt has to concentrate elsewhere,” he said. “And as a result of this, that means that certain people, certain small businesses, certain governments around the world, are permanently indebted. And therefore the economy has to grow because those people have to take out more credit to survive.”

Maclurcan said one of the goals of a post-growth economy is the circulation of money in a way that still takes care of the environment.

“A post-growth economy detaches from that dependency and says, ‘Okay, how do we have an economy where there’s circulation built in so that we can all thrive, that debt doesn’t have to be an ongoing expansionist imperative but can actually be something that rises and falls according to need, not greed,’” he said.

During Free Money Day, representatives from PGI hand out money to people and ask them to pass on half to somebody else. Each year, the event is held on September 15: the day of the Lehman Brothers collapse. This year’s Free Money Day was particularly poignant, as it marked the 10-year anniversary of the Lehman Brothers’ filing for bankruptcy and thereby triggering the start of the 2008 recession.

After participating in Free Money Day several times, Maclurcan said invoking the sharing aspect of the experiment—rather than asking people if they want money—is a more successful method in influencing people to participate.

“When you invoke that sharing aspect, it’s like it gives people permission to step into that space,” he said.

Maclurcan said the social experiment is meant to explore people’s attachment to money and remind people that money must freely circulate in a successful economy.

In addition to Free Money Day, PGI hosts an Offers and Needs Market: an in-person process where participants have the opportunity to share what they have to give and what they need from others. During the 90-minute session, participants can say if they are interested in charging, bartering, gifting or negotiating.

“That can be one of the hardest things to do,” said Crystal Arnold, educational director at PGI. “So we kind of build that social capital and connection in communities in real life, real time.”

Arnold said the Offers and Needs Market allows people to establish connections and create exchanges within their local economy. She said one of its strengths is the way it shifts the way people look at wealth.

“It really reveals the wealth within a community,” Arnold said. “So often we feel like there’s not enough, or a kind of scarcity—or, ‘People don’t want what I have.’ And so it’s really a way for people to acknowledge what is already there in their communities.”

Within a post-growth economy, human connection and relationships are the focal point instead of profit maximization and wealth accumulation. The focus on people over profits is already present in other systems like the caring economy, in which labor that is traditionally unpaid—such as a parent watching over their kids—are supported by the government. Forms of caring economies are currently in practice in Nordic countries like Norway and Sweden, where the government supports child care programs, paid parental leave and funding for families who care for children or the elderly.

A caring economy would also value emotional labor, a term first coined in 1983 by sociologist Arlie Hochschild that identifies the pervasiveness with which people become the human sponge that, whether consciously or unconsciously, takes into account and absorbs other people’s needs and emotions. Emotional labor is often unpaid, unrecognized work that disproportionately impacts women. A recent study by the United Nations showed that women “do 2.6 times the amount of unpaid work that men do.”

On an episode of the podcast WorkLife, Penn State University psychologist Alicia Grandey described emotional labor with the following analogy:

“It’s kind of like when you get a gift and you don’t really like it, and you have to still smile and act nice because otherwise your Aunt Bernadette would be offended. But you have to do that all day long. Not only that, but it’s explicitly part of your job. It’s tied to your wages and outcomes, and if you don’t do it, there are consequences—like you could lose your job, or you could get in trouble. And it’s with strangers, for the most part.”

“There’s so much value that already happens in a human-centered economic system,” he said. “It’s just that that system is not valued within the lens of capitalism.”

“Post-capitalism says, ‘What’s good about capitalism that we want to take forward? And what’s bad that we want to leave behind?’” Maclurcan said. “The good piece is that the fundamentals of the market economy, we think, are really valuable. The bad piece is you have a profit-maximizing system.”

Maclurcan added that post-capitalism is about considering how the economy can evolve and leave behind the flaws of capitalism.

“Capitalism will never work in the long run, for the economy, for the people or for the planet,” he said. “But a post-capitalist system can still draw on good aspects within capitalism.”

Arnold said she sees capitalism evolving into an intimate economy that embraces the ways people care for each other, where scarcity and competition are not already woven into the system.

“I see the economy as this: as a place where people come together to care for one another, where we can have our needs met through the market and we can also share our gifts,” she said.

In a post-capitalist system, the not-for-profit business model would become the norm—credit unions would replace banks and local co-ops would replace grocery store chains. Arnold said not-for-profits can empower communities by creating a more prosperous local economy where profits are not hoarded by a small wealthy minority.

“A not-for-profit entity recycles their profits back into serving the people,” she said.

At its core, the Post Growth Institute believes that capitalism, as it stands, is a fundamentally unsustainable system that will have to change. And it’s not alone: a growing number of millennials share similar sentiments.

Arnold said that with the constant degradation of the environment caused by capitalism and the hunger for profit, it’s clear that business cannot continue as usual.

“With such great wealth inequality,” she said, “it’s basically a really unhealthy system.”