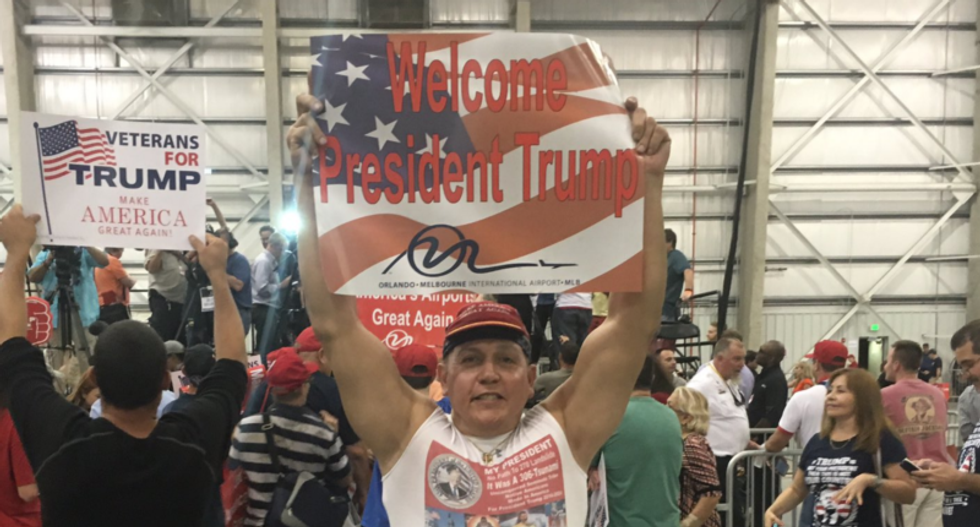 As we approach the agonizing final week before the midterm elections, both political parties are in a state of high anxiety. Professional tea-leaf readers of the media class have numerous narratives to offer: Some are mysterious, others are glaringly obvious, none are necessarily consistent or coherent.

Beto O’Rourke’s Lone Star insurgency may be fading away, and with it Democrats’ chances of winning the Senate. Republicans fear they may lose both the governorship and the Senate race in Florida, a potential Waterloo moment for President Trump in a purple state that has played a key role in every recent presidential election. Journalists like New York Times columnist David Leonhardt have begun to aggressively hedge their bets on the “blue wave,” in anticipation of saying “I told you so” on Nov. 7 if Trump’s electoral elixir — equal parts paranoia, bigotry and bluster — turns out to be magic once again.

In the larger scheme of things, none of this is remotely surprising. The likeliest outcome in next Tuesday’s election — a Democratic House and a Republican Senate — was also the likeliest outcome six months ago. Any responsible political scientist will tell you that midterm elections operate in predictable waves and cycles, and their dynamics don’t suddenly shift in the last two weeks.

But there is no “larger scheme of things” these days, and no sense that events conform to comprehensible patterns. There is only the panic of the eternal now, and a president with near-zero impulse control who has configured our diseased media economy to respond to his flatulent pronouncements like a pack of mistreated dogs. As Trump observed this week, when asked for proof that there were “Middle Easterners” in the so-called migrant caravan now moving through Mexico, as he had claimed: “There’s no proof of anything.”

That moment of epistemological doubt or rampant bullshit or whatever you’d like to call it bespeaks deeper problems with our slow-perishing republic that the midterm elections can’t fix. One of the distinctive features of the 2018 campaign is that the recurring clichÃ© (employed by both parties, with varying intensity, at different times) that this is Our Last Chance to Save America is widely believed to be true.

In a classic Trump Twitter moment, which seemed to express the national Zeitgeist in upside-down fashion, the president complained this week that actual news kept interfering with the imaginary narratives of electoral politics. He lamented that “this ‘Bomb’ stuff” was slowing perceived Republican momentum, coyly suggesting — without quite saying so — that the pipe bombs mailed to many prominent Democrats over the past week might be fake news or a “false flag” operation or unreal in some other way.

A few hours later, of course, a Florida man named Cesar Sayoc Jr., who has a criminal record and a recent history as a highly conspicuous Trump super-fan, was arrested and accused of mailing those bombs. Since that happened, some people on the conspiracy-theory right have already floated the narrative that Sayoc is too perfect, and too closely resembles a deranged bomber in a political thriller. Sometimes life’s imitation of art can be less than convincing.

I would argue that “this ‘Bomb’ stuff” carries both an obvious and disturbing meaning and a more symbolic one. First of all, some dude who lived in his van in a strip-mall parking lot and worshipped Trump a bit too much decided to carry the president’s persistent threats against his enemies into the physical realm — even if we still don’t know whether those bombs could have exploded, or were meant to. As I was completing this article, news broke of a mass shooting at a synagogue in Pittsburgh that left at least 11 people dead and several others injured. I can only pray this was not another illustration of the theme, but it certainly might be. (Unfortunately, I have now updated that sentence twice since publishing it.)

Secondly, the social and cultural illness that fed and nurtured someone like Sayoc, and perhaps the Pittsburgh shooter — an entire ecology of hate speech, violent threats, political demonization and conspiratorial fantasy — is not some brand new invention sparked by the former host of “The Apprentice,” and is not going away just because Nancy Pelosi might be speaker of the House in a few weeks.

Please don’t misunderstand me: I am not endorsing apathy or disengagement. I am endorsing vigilance, long-term realism and perhaps a certain ruthlessness. I know left-wing anarchists who normally view the Democratic Party with contempt but this year are doing get-out-the-vote work on behalf of moderate Democrats in marginal House districts, or nationalized candidates like Andrew Gillum in Florida and Stacey Abrams in Georgia. For many people on the left-liberal spectrum, the 2018 midterms are about “harm reduction,” or creating a slowdown or checkpoint on the Trumpian agenda, or simply an opportunity for a symbolic victory that may show the world the tide is turning.

Those are honorable goals. But as I suggested last week, the road ahead after Nov. 6 has many pitfalls. Democrats have a lot riding on this election: They may suffer a severe implosion if they lose, and have no clear idea what to do if they win. The anti-Trump coalition loosely termed the “resistance” can agree that it wants an America that is less conspicuously divided and diseased. But its members absolutely do not agree about the roots of that division and disease, or about how to address it.

How do we treat the disorder that produced Cesar Sayoc? Or that allows the president of the United States to treat a group of refugees from impoverished and dysfunctional nations (for whose problems we bear at least some responsibility) as a hostile invading army? Or that convinced a once-respectable news network to pay fabulous sums of money to an overtly racist anchorwoman, because she was blonde and pretty and because our media culture has become so corrupt that it seemed plausible her racism was just an act?

NBC’s panicky decision to fling Megyn Kelly off the train, concluding her brief, unsuccessful and spectacularly overpaid tenure at the “Today” show, was absolutely not a celebutainment distraction from the real news. In some ways, it was the realest news of the week. Because the people in and around the media and political classes who made apologies for Kelly’s previous egregious behavior, who depicted her as a pseudo-feminist rebel at Fox News and who built up her mythic image as a “moderate” or “unifying” avatar of American womanhood, are exactly the same people who believe that the 2018 midterms offer us a path back to normalcy.

It’s tempting to say that I’m talking about “mainstream” liberals and “establishment” Democrats, but that’s not entirely accurate, and in the current climate it feels lazy to use those terms as pejorative epithets. What has gone wrong in America is not Hillary Clinton’s fault; like Donald Trump, she is a messenger, or a symbol. Let’s say instead that for many powerful and well-insulated Americans near the top of the cultural pyramid, from the center-left to the center-right — including at least some penitent conservatives in the Max Boot and Tom Nichols mold — a potential Democratic congressional majority in 2019 carries a special significance.

It represents a symbolic Restoration of the old order, something like installing Charles II on the throne in 1660 after the disastrous experiment of Oliver Cromwell’s Puritan regime. It’s one last chance to reassert sanity and normalcy — which in this case signifies a government operated by spooks and wizards with Ivy League degrees — before we plunge off the cliff into the bottomless troll-hole of dumbass fascism. It’s time, in this worldview, for ideological enemies to set aside our differences and join in a “Coalition of Normals,” to quote Salon contributor Bob Cesca, devoted to restoring our republic and enforcing “presidential” conduct on the presidency.

To this particular fantasy I say, with respect and affection and some lingering nostalgia: LOL whatever. This “normal” that you speak of: When was that, and where is it to be found? The Benghazi hearings? The drone war and the secret “kill list” that included American citizens? The birther controversy and the “death panels”? Potential vice president Sarah Palin? The Iraq war and the “unknown unknowns”? The Lewinsky scandal and the “meaning of is”?

This version of making America great again is every bit as vague and ahistorical as Donald Trump’s, albeit with better optics and improved literacy. The proposition that stuff in America was way super-normal, swimming along at high levels of rational efficiency, until the day that Donald Trump descended that golden escalator and started talking about Mexican rapists, is just so dumb. Please don’t try to look me in the eye, or anybody else either, and claim to believe that.

Trump was uniquely positioned to capitalize on perceptions that were at least partly true, but that he did not create. Those included the perception that the nation’s bipartisan leadership caste had condescended to the American people for years, lied about their true objectives and collaborated in a regime of endless war and economic inequality. He translated those perceptions into an especially ugly and dangerous form of cultural warfare, some of whose consequences we have observed this week. That does not mean the underlying feelings of cynicism, apathy, abandonment and disenfranchisement — which are felt across the political spectrum, not just among the Trump demographic — are entirely illegitimate.

Is it critical to America’s future that Democrats win the midterms? Without parsing the terms too closely, I would say maybe so. But only as the first step on a long road toward building a nation where Megyn Kelly, Cesar Sayoc and Donald Trump are not necessary and do not happen. If a slender and defensive congressional majority is seen as an end in itself — or if this election becomes a referendum on the ancien rÃ©gime, circa 2014 — then I'm sure of the outcome: Everybody loses.