Diabolical and Deliberately Evil: Here's Why the GOP's Plans for America This Fall Are Genuinely Frightening 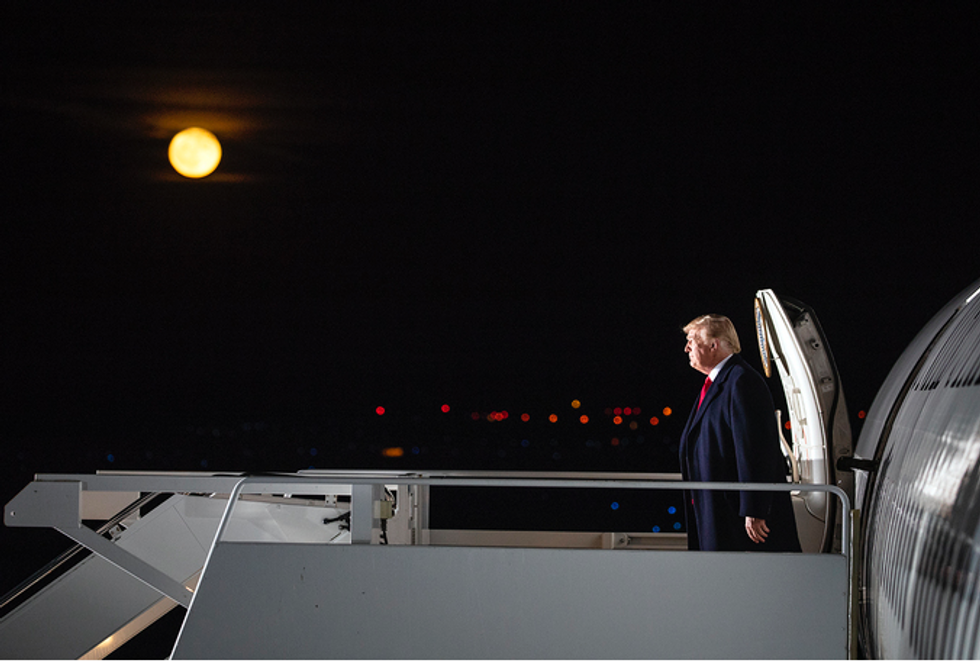 As we enter another long season of direful winter darkness, we are beset by back-to-back waves of spooks. First come the little costumed goblins on Halloween, seeking sweet treats from us to ward off any trickery they might pull. Cute.

But then, only six days later -- eeeeeeek! -- here come the real spine-chilling horrors of the season: Office-seeking politicians of the extreme right demanding votes on Election Day. Not cute. With devilish signals to their base, they promise to be more Trumpian than Trump, offering a Mephistophelian agenda ranging from the harsher treatment of the poor to the more plutocratic alchemy enthroning the rich over America's workaday people.

In the latter category is a truly dreadful GOP scheme to decimate public benefits that sustain all of us who are -- or hope to be -- middle-class. Of course, they can't come right out and say they intend to gut the middle class, so their candidates and officials have been speaking in tongues about it. Here's hoary senatorial scamp Mitch McConnell babbling that Republicans will "address the real drivers of debt by (adjusting) those programs to the demographics of America in the future."

That means nothing to normal voters, but it's music to the ears of the Koch brothers and all other corporate supremacists who are funding the GOP's congressional candidates this season. The English translation of McConnell's intentionally deceptive political code words is this: We're going all out next year to undermine and effectively kill the people's Social Security, Medicare and Medicaid programs.

Just a year ago, McConnell, Trump & Company rammed into law a trillion-dollar tax giveaway for corporate elites, saying they didn't care that it would wildly inflate the deficit. Now, though, they say all of that red ink is suddenly of grave concern to them. So, to stem the flow caused by their boondoggle for the rich, Republicans intend to cut off the Social Security and health care payments that middle-class and poor families rely on.

This is not just diabolical; it's deliberately evil. And all politicians who support it should be condemned to the most hellish fate imaginable.

In keeping with the spirit of the season, Trump's White House seems to be both spooked and spooky.

Check out a 72-page report issued right before Halloween by his Council of Economic Advisers. While the Council's documents usually cast each of the president's policies in the best light, they do so in sober, quasi-academic language focused on the incumbent's policies. But the Council's Halloween report reads like an endless Trump tweet, focused on his perceived political enemies and riddled with fantasies, lies and paranoia about their policies.

In antiquated Joe McCarthy-style, the Trump advisers spew conspiracy theories about the proposals of Elizabeth Warren, Bernie Sanders and other Democrats, frantically linking them with "Failed Socialist Policies" of Lenin, Stalin, Mao and other communist dictators. Bernie's common-sense ideas of "Medicare-for-All" and free college education, for example, are hysterically decried as totalitarian designs from China and the USSR.

Likewise, the report compares Warren's true assertion that corporate giants are dodging their tax obligations to Lenin's demonization and killing of yeoman farmers.

In this ludicrous, right-ring political screed -- paid for by us taxpayers -- the fraidy-cat Trump scaremongers toss in the supposedly spooky word "socialism" 144 times -- an average of twice per page. Among the horrors the Trumpistas cite is that senators Bernie Sanders and Elizabeth Warren have stated that large corporations "exploit human misery and insecurity, and turn them into huge profits" and "giant corporations ... exploit workers just to boost their own profits."

Excuse me, learned scholars, but all of that happens to be true, as the great majority of Americans know from experience. Trump's economists also inform us that if the U.S. adopted Venezuelan policies -- o, the horror! -- our economy would shrink by 40 percent. Well, perhaps, but here's the thing: No one is proposing we do that.

What's really spooky is that these know-nothing ideologues are actually advisers to a president of the United States. To boost the economy and help balance the budget, let's eliminate them with our votes.