'Shut Up, Side Table!' Watch the Blistering - and Hilarious - Ad House Democrats Are Using to Slam the GOP Tax Scam 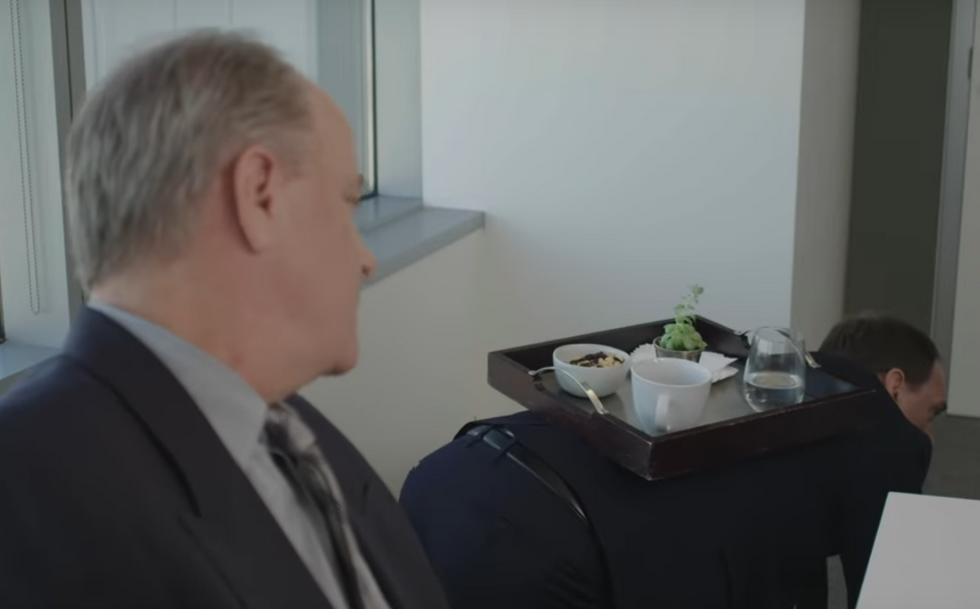 On Tuesday, the Democratic Congressional Campaign Committee (DCCC) released an attack ad slamming Republicans for last year's gigantic, regressive package of tax cuts for corporations and billionaires. And the spot is something that is almost never said of political campaign ads: funny.

The ad, titled "Side Table," features a group of CEOs in a corporate boardroom, discussing a minor worry that suddenly seems to have occurred to them about the GOP's signature 2017 piece of legislation.

"Sir, what happens when the Average Joe out there realizes that we got, like, the entire Republican tax cut?" says one of the executives. "I mean we got, like, all of it."

"Oh, come on, they got a tax cut, okay?" says another, before rounding on a subordinate who is hunched over with a food-laden wooden board belted to his back. "Side Table, how much was your tax cut?"

"Yeah, but for someone like Side Table, 'not a lot' is actually quite a bit," says the second CEO. "I bet he saves enough each week to by a, hell, I dunno, a ... a latte at Starbucks, right?"

"Shut up, Side Table!" barks the CEO. He then turns back to the group and says, "We are job creators. Remember that, okay?"

The boardroom murmurs in agreement.

"Coat Rack!" shouts the CEO at another employee on the far side of the room who is holding several coats on the crooks of his arms, "Can you see what's taking the lobster tails so long?"

"You got it," he says before leaving the room.

The ad is a part of a series starring this group of rich executives, on which the DCCC partnered with Ben Wexler, a comedy producer known for his work on "Arrested Development." In April, the DCCC released the first of the ads, titled "Diamond Teeth," which featured executives in that same boardroom boasting about the luxury items they planned to buy with their tax breaks. A second in May, titled "Bonus Checks," depicted the executives cheering about their massive compensation in front of a receptionist who is in danger of losing health care.

The Democratic committees have pushed unconventional advertising this cycle. One other spot last year from the Democratic Senatorial Campaign Committee (DSCC), titled "The Price," shows a mother and father silently selling their car and pawning their engagement ring to pay for their young daughter's medical treatment, and ends by asking, "What will the Republican health care plan cost you?"

The GOP tax bill is widely considered a political failure, even by Republican strategists. But incredibly, Republicans in Congress want to take another crack at it. In the middle of the hearings for Supreme Court nominee Brett Kavanaugh, the House GOP quietly passed another, $3.1 trillion bill to expand their tax cuts.