The Crazy News Cycle of the Trump Era: How We've All Become Trapped in the President's Political Whirlwind of Nonstop Anxiety 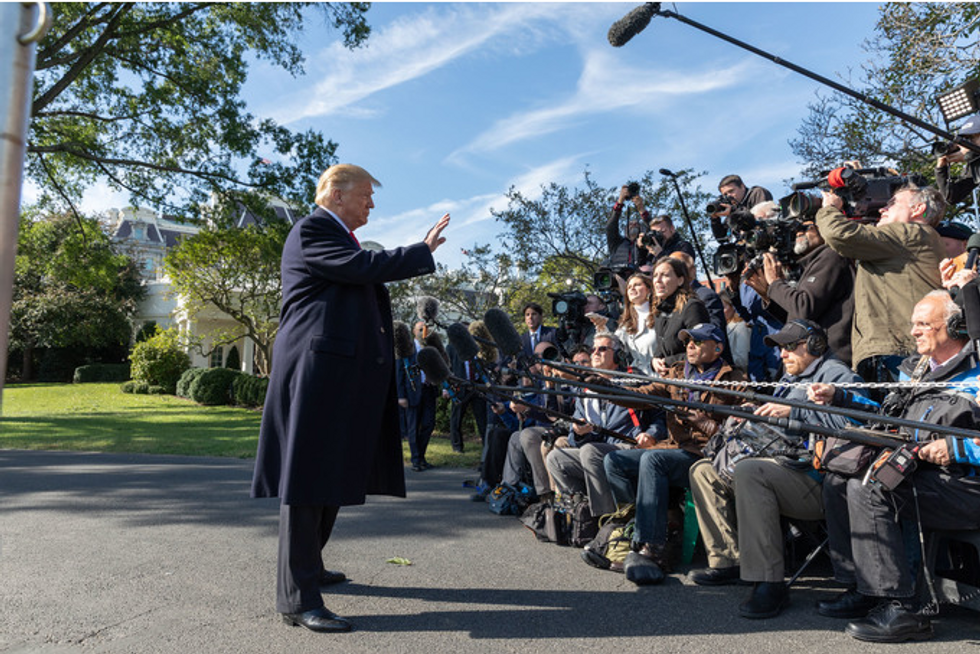 In the high-anxiety Donald Trump era, the focus of one’s attention can change very quickly. A crisis or controversy that dominates the 24-hour news cycle one day can easily disappear the next day—or at least be sidelined—when another crisis or controversy comes along or there is a shocking new development. And the events of the past week have been a perfect example, with one act of domestic terrorism after another vying for the public’s attention.

Last week on October 25, residents of Lexington, Kentucky were horrified by the random killings of two older African-Americans (67-year-old Vickie Lee Jones and 69-year-old Maurice Stallard) in what appeared to be a racially motivated hate crime at a Kroger supermarket. Surveillance footage showed that only a few minutes before the shootings, the suspect (a white man with a long history of racism) tried to forcibly enter an African-American church. But as horrific as that incident was, it wasn’t as sophisticated or far-reaching as the white nationalist terror campaign carried out against a long list of prominent Democrats as well as CNN.

Thankfully, no one was injured last week when a series of pipe bombs were mailed to a long list of well-known Democrats, including Barack and Michelle Obama, Bill and Hillary Clinton, former Vice President Joe Biden, billionaire philanthropist George Soros, Rep. Maxine Waters and actor Robert De Niro—all outspoken critics of Trump’s presidency. One of the packages forced the evacuation of CNN’s Manhattan offices.

Mail carriers breathed a sigh of relief when, on October 26, investigators found a suspect: Cesar Altieri Sayoc, a 56-year-old Florida resident who was an ardent supporter of Trump and had an intense hatred of Democrats. But consumers of news didn’t have long to focus so heavily on Sayoc: the following day—on Saturday, October 27—Americans were horrified to learn that 11 people had been slaughtered in a mass shooting at the Tree of Life synagogue in Pittsburgh. It was, according to the Anti-Defamation League (ADL), the deadliest anti-Semitic attack in U.S. history.

This is life in the Trump era: there isn’t much time to focus on one shocking development because another one is right around the corner.

Special Counsel Robert Mueller’s Russia-related investigation played a prominent role in the news cycle in mid-September—especially when, on September 14, Trump’s former campaign manager, Paul Manafort, agreed to a plea deal and said he would cooperate fully with Mueller’s team. Having been convicted of eight criminal counts on August 21 (the same day Trump’s former personal attorney, Michael Cohen, pled guilty to eight criminal counts), Manafort was getting ready for a second trial that was scheduled to begin on September 24. But Manafort’s decision to cooperate with Mueller and plead guilty to some of the charges he was facing meant that there would be no second trial.

The Manafort-related bombshells of mid-September, however, received a lot less attention when Trump’s Supreme Court nominee, Brett M. Kavanaugh, was accused of sexual abuse by three different women—first Christine Blasey Ford, then Deborah Ramirez, then Julie Swetnick. During the second half of September and into early October, the news cycle was dominated by Kavanaugh’s nomination and the sexual abuse allegations against him. But after Kavanaugh’s confirmation to the Supreme Court, Manafort’s name wasn’t in the news cycle nearly as much—and no sooner had the Kavanaugh controversy died down than the media were consumed by the murder of Saudi journalist and Washington Post columnist Jamal Khashoggi and Trump’s response to it.

Turkish officials have alleged that when Khashoggi visited the Saudi Consulate in Istanbul on October 2, he was murdered by Saudi agents on orders from the Saudi royal family—an allegation that Saudi Crown Prince Mohammed bin Salman, a.k.a. MBS, has vehemently denied. Trump has drawn a great deal of criticism for his anemic response to Khashoggi’s death and reluctance to criticize the Saudi government.

But as prominent as Khashoggi’s death was in the news cycle in mid-October—and as horrific as the killing was—it received a lot less attention when the U.S. was rocked by a white nationalist domestic terror campaign and pipe bombs mailed to major Democrats.

Back in 1989, Billy Joel’s #1 hit “We Didn’t Start the Fire” made the point that political insanity didn’t start in the late 1980s—the world was always insane. True enough: every era has is going to be rocked by a certain amount of insanity and upheaval, whether it was Watergate in the 1970s, the Great Depression in the 1930s, World War II in the 1940s or the Vietnam War and the assassinations of Martin Luther King, President John F. Kennedy and Malcolm X in the 1960s

But the Trump era has certainly been one of nonstop anxiety. Moments of calm are hard to come by in the Trump era. If one political bombshell, controversy, crisis or scandal is consuming one’s attention today, it probably won’t remain in the news cycle for long—and the next shocker is probably right around the corner.