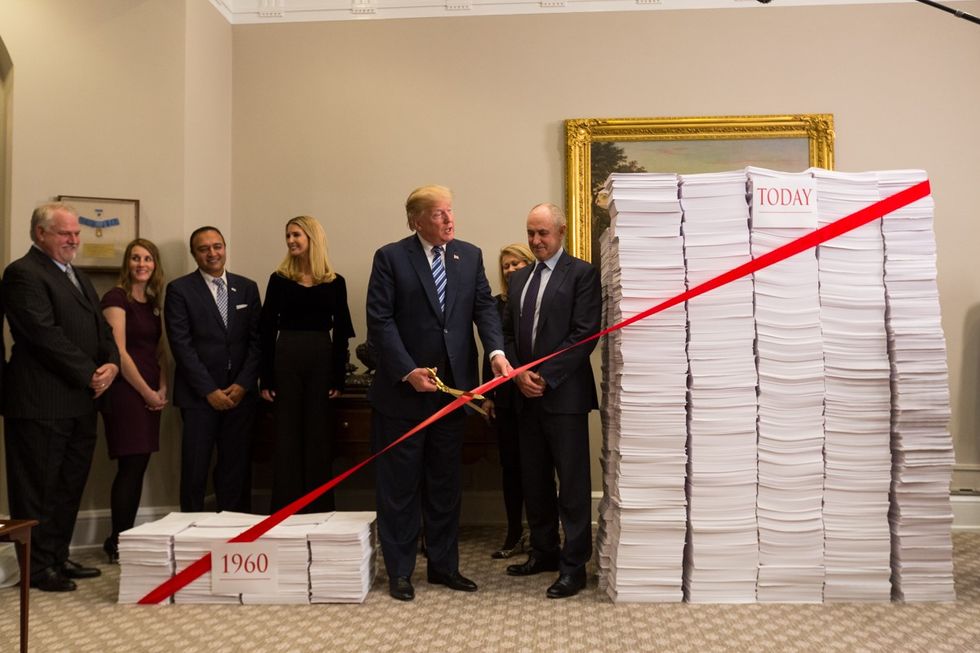 Conservative columnist George Will is deeply worried about the state of truth and knowledge in the United States right now, and that worry has one primary cause: President Donald Trump.

For just one example of Trump's flagrant lying: He recently invented fake Democratic legislation called the "Open Borders Act" — even though no such bill exists. According to analysis by Toronto Star's Daniel Dale, Trump's dishonesty has spiked in recent months.

Citing a new essay from Brookings Institution’s Jonathan Rauch titled "The Constitution of Knowledge," Will explained in a Washington Post column this week that Trump's lying is a clear political strategy, not a mere character flaw.

Rauch says: Trump’s presidential lying, which began concerning the size of his inauguration crowd, reflects “a strategy, not merely a character flaw or pathology.” And the way to combat Trump’s “epistemic attack” on Americans’ “collective ability to distinguish truth from falsehood” is by attending to the various social mechanisms that, taken together, are “the method of validating propositions.”

Modernity began when humanity “removed reality-making from the authoritarian control of priests and princes” and outsourced it to no one in particular. It was given over to “a decentralized, globe-spanning community of critical testers who hunt for each other’s errors.” This is why today’s foremost enemy of modernity is populism, which cannot abide the idea that majorities are not self-validating, and neither are intense minorities (e.g., the “Elvis lives” cohort). Validation comes from the “critical testers” who are the bane of populists’ existence because the testers are, by dint of training and effort, superior to the crowd, “no matter how many” are in it.

These "critical testers" exist throughout society in a variety of institutions such as watchdog groups, non-political government bureaucrats, certain forms of media, and academia.

But Will explains that this strategy, as pioneered by Steve Bannon, is bound to fail over time:

Will is not entirely optimistic that truth and knowledge will easily prevail, however. As a conservative, he is deeply distrustful of the scholars of mainstream academia, and he draws upon a lie from former Democratic Senate Majority Leader Harry Reid to argue that Trump is not the originator of political deception — even though Reid's sins are infinitesimally tiny compared to Trump.

But there are signs that Trump's lies are losing their appeal. Fox News appears to be less interested in airing Trump's rallies now — they are clearly sapped of novelty. Many of the statements that what would have been regarded as remarkable are now just background noise. Trump is becoming boring. It seems the shock value of his outrageousness is starting to wear thin, and it's not clear that his assaults on knowledge can persist without it.