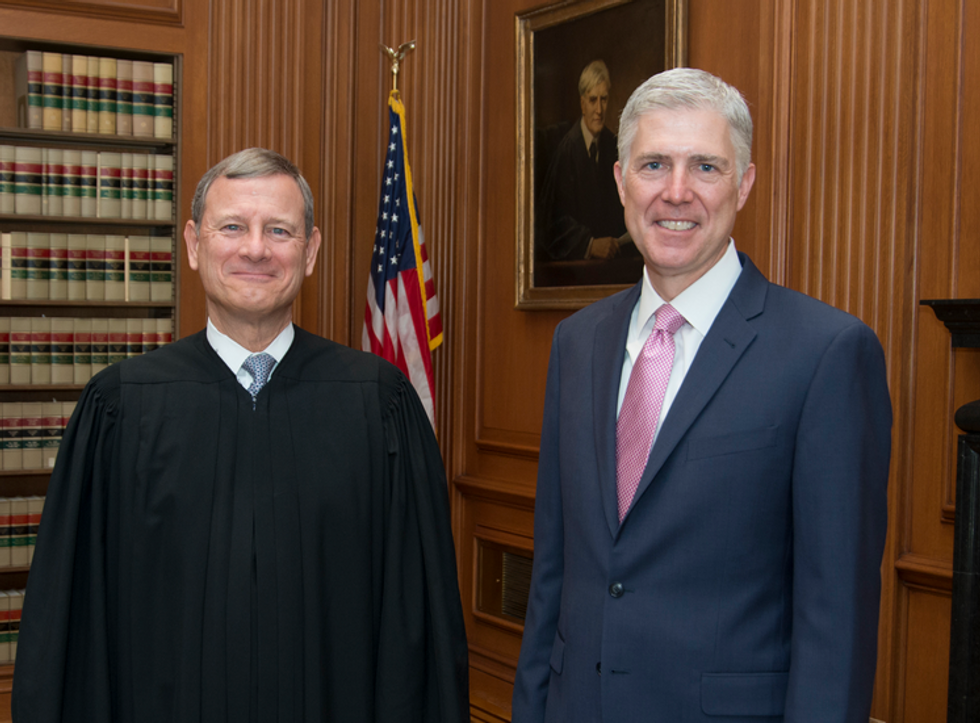 The confirmation of a clearly hyper-partisan and unqualified justice to the Supreme Court has forced Chief Justice John Roberts to publicly address the issue, and assure the nation that even with Brett Kavanaugh on the court, it will not be just another arm of the Republican party.

"Our role is very clear," he said at a speech at the University of Minnesota Law School. "We are to interpret the Constitution and laws of the United States, and to ensure that the political branches act within them," he said. "That job obviously requires independence from the political branches. The story of the Supreme Court would be very different without that sort of independence." Completely independent and there to "serve one nation" and "speak for the Constitution."

Says the man helming the court that unleashed unlimited dark money on the nation with the Citizens United decision; eviscerated the Voting Rights Act in Shelby County v. Holder, allowing for a raft of illegal voter-suppression efforts to flourish in the states; and struck down the Medicaid expansion in NFIB v. Sebelius, creating a separate and unequal division for poor people in the states, in which Republican states opted out, leaving millions of low-income Americans without coverage.

"Now the court has from time to time erred, and erred greatly," Roberts continued. "But when it has, it has been because the court yielded to political pressure." The example he used was an old one, Koretmatsu, which upheld the internment of Japanese-American citizens during World War II. But as Adam Serwer observes, the political pressure the Roberts Court has yielded to is decidedly "wealthy, white and connected and many of the the decisions people mention to defend the court are decisions people like Roberts think are terrible."

With Kavanaugh on the court, Serwer finds a warning in Roberts' speech rather than assurance. He see "Roberts foreshadowing the court going farther to the right than the majority of Americans want it to, and he wants to preemptively frame those decisions as acts of integrity rather than partisan goals." He wants to firmly seat those decisions in "the Constitution," even though it's these five men reading the Constitution they way they want to read it.