Can a Tsunami of Angry Women Voters Swamp the Republicans’ White Male Base? 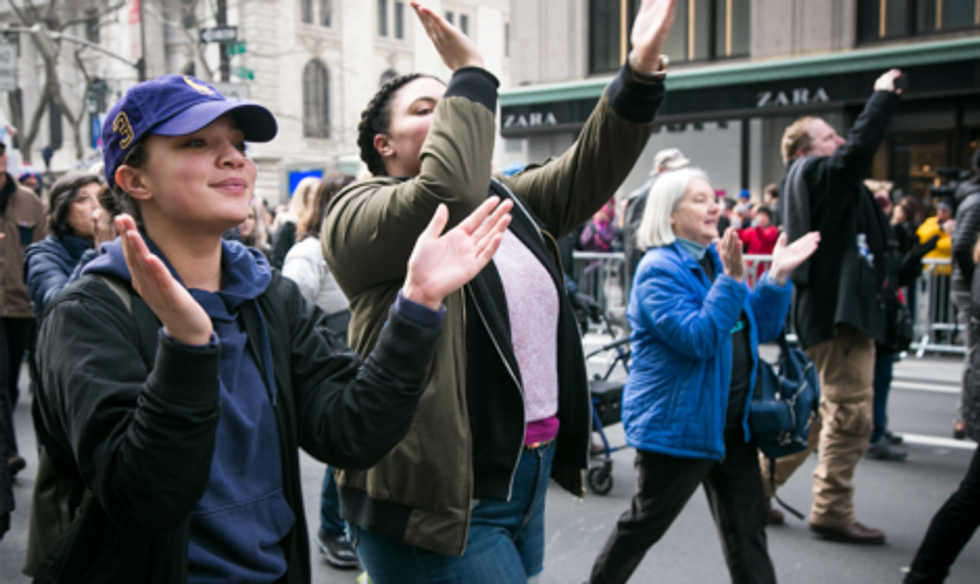 Before the mess that was the confirmation of newly minted Supreme Court Justice Brett Kavanaugh, there was talk that Democrats could take back the House and the Senate. But then Kavanaugh’s Trump-like vitriol, anger and partisanship during that process fired up the Trump base and surprisingly still managed to earn him a seat on the bench of the nation’s highest court where temperament and non-partisanship are typically the gold standards. As many have mused lately, Trump has managed to tarnish even the Supreme Court.

As we inch closer to Election Day, what does this mean for Democrats and the so-called Blue Wave? It seems Democrats still have a solid chance of taking back the House. In fact, just this past week, The Cook Political Report moved ratings changes on eight more House seats toward Democrats, from New York to Utah. At this point, the newsletter predicts “the likeliest outcome to be a Democratic gain between 25 and 40 seats.” Democrats need to pick up 23 seats to gain control of Congress. FiveThirtyEight forecast that Democrats had a 74% chance of taking back the House as of Oct. 6, 2018.

Before Kavanaugh’s theatrics and confirmation, there was speculation that while prospects were daunting Democrats had a chance, or at least the momentum, of winning back the Senate, too. But the Kavanaugh debacle makes the Senate a lot harder to predict because it gets to the question of voter turnout, which is always hard to accurately predict. Though on Oct. 6, FiveThirtyEight forecast Democrats had a 22% chance of winning back the Senate.

Democrats were already super energized about the midterms. Democrats voting in primaries in the first 31 states to hold elections this year, stormed the polls by an increase of 84% over 2014, according to research conducted by the Pew Research Center in July. By comparison, Republicans showed an increase of only 24% in the same time period.

Vote.org – More information about voter registration broken out by state and by in-person, online and by mail registration. It also shows which states allow you to register to vote on Election Day.

Rock the Vote – Volunteer to help get out the vote this election in all sorts of different ways, from doing graphic design to phone banking from home or hosting a voter registration drive.

Get Off Your Donkey and Vote! – This site, geared toward Democrats taking back control of the House and Senate, offers ways to help volunteer, donate and just stay involved this election.

There has also been a notable widening gender gap this election cycle. A Pew Research Poll released on Oct. 1, 2018, showed a majority of women disapproved of Trump’s job performance by 63% (with 30% approving) compared with 46% of men who approved of his performance. Women are favoring Democrats by a 10-point gap over men, who favor Republicans by 5 points, which makes for a total gap of 15-points on the generic ballot, according to a recent The Economist/YouGov poll.

Now, add some gasoline in the name of Brett Kavanaugh to that bonfire of female voters casting ballots on Trump’s referendum and treatment of women and that Blue Wave could become a tsunami that snatches up endangered GOP Senate seats like Ted Cruz’s in Texas or Marsha Blackburn’s in Tennessee, not to mention the open seats like the one in Arizona Jeff Flake is abandoning.

But the Kavanaugh confirmation process, while fanning the flames on the left, chummed the waters for Trump’s base and may have energized them enough to lull them out of complacency to get out the vote and retain those precious Senate seats.

Recent polling by The New York Times Upshot/Siena College showed that support for Kavanaugh aligned very closely with voters’ opinions of Trump’s job approval. Basically, if a voter liked Trump, they’d like Kavanaugh and vice-versa. For example, where Trump was unpopular, like the suburban Twin Cities area where his job approval rating was at 38% at the time of the poll, support for Kavanaugh was at 43%. But in the more conservative Cincinnati suburbs, Trump had a job approval rating of 48% and Kavanaugh’s support there was at 51%. The advantage here for the GOP going forward into the midterms is in the districts where the president is near a 50% job-approval rating because Republicans do better in polarized, partisan fights, according to The Cook Political Report.

However, that may not hold true post-Kavanaugh. These have become ugly times.

And now that Kavanaugh has been confirmed there’s a chance that Trump’s base – the angry white male – will once again slip into dormancy thanks to that victory. They got what they wanted, didn’t they? In fact, they got a little more than they asked for: A Supreme Court seat and a performance, albeit cringe-worthy.