Americans Want a Manufacturing Overhaul and They Want It Now 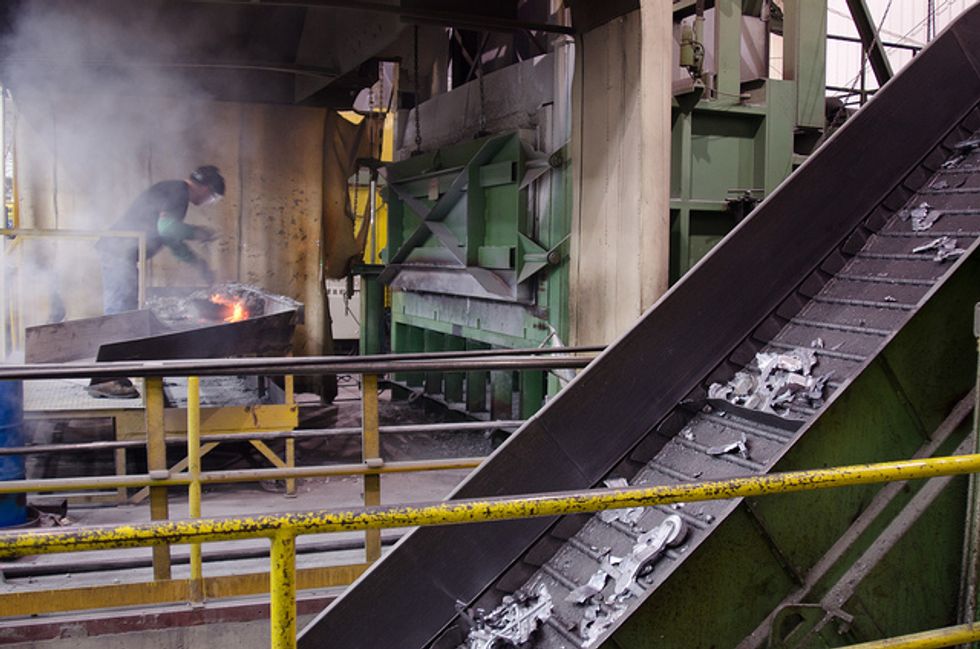 Melter operator Carl Welborn faces flames and intense heat to forklift foundry ingots into; and shovels slag out of a furnace crucible at Port City Group’s Port City Castings Corporation, manufacturer of high-pressure aluminum die-castings, mostly for the automotive industry, in Muskegon, MI, facility on Wednesday July 20, 2011. Port City Group boosted its employment by 12 percent over last year thanks to two Rural Business Guaranteed Loans totaling $9.6 million. In its 80,000 sq. ft. facility, machines that range from 800 – 1,600 tons, and cast A380 aluminum alloy products from melted ingots of aluminum, into automotive components of U.S.A. made vehicles. The process features a variety of robotic presses; computer controlled machining; quality control facility; and complete measurement and testing laboratory. In 2009 banks were backing out of loans for PCG equipment purchase agreements. The U.S. Department of Agriculture (USDA) loan guarantee helped make the loan possible with its guarantee. PCG obtained the needed robotic and other equipment. This resulted in a stable workforce that has since grown. When asked about their USDA experience, Port City Group Sales Manager Laura LaGuire said, “It was great! They were very helpful. Everything that came up was handled smoothly, the money came in place when it was needed, and it was a very smooth transition.” USDA Photo by Lance Cheung.
Leo Gerard
,
Independent Media Institute
and
Leo Gerard
October 15, 2018 Economy

Lately it feels as if the United States is anything but united. From climate change to universal health care, from Kanye West to the validity of pumpkin spice, Americans seem divided over every issue under the sun.

But a new survey reveals there is at least one thing on which the majority of this country agrees.

The Alliance for American Manufacturing (AAM) recently conducted a poll of 1,200 general election voters and found that most Americans, even across party lines, believe that U.S. manufacturing is critical to maintaining national security. They also believe workers deserve better wages, and countries that cheat or side-step trade commitments should be held accountable.

Last month, the Department of Defense issued a report confirming that what American voters believe is right—U.S. manufacturing is crucial to national security. The report says that the department currently relies on China and other potential rival countries for essential materials to produce everything from steel armor plate to lithium-ion batteries.

“The ability of the military to surge in response to an emergency depends on our nation’s ability to produce needed parts and systems, healthy and secure supply chains, and a skilled U.S. workforce,” the report states. “Not only is the manufacturing sector the backbone of U.S. military technical advantage, but also a major contributor to the U.S. economy.”

Both the AAM survey and the Defense Department’s conclusions prove the labor movement was right when it advocated for years for robust yet strategic policies to support domestic manufacturing. Programs reinforcing manufacturing are popular, but more importantly, they are vital to America’s basic survival.

Manufacturing is an economic generator. Every new manufacturing job supports 3.6 jobs in other sectors. Manufacturing also accounts for 60 percent of the country’s exports and 12 percent of its GDP, according to the Defense report.

Over the past few decades, a swarm of malevolent elements has threatened industry, with some destructive enough to knock down entire limbs. NAFTA rolled through in the ’90s and took with it 950,000 good-paying manufacturing jobs. Because of corporate-friendly provisions in NAFTA and U.S. tax policy, many factories moved from the United States to low-wage, high-pollution maquiladoras in Mexico.

The Defense report says events like these have led to several key vulnerabilities in the nation’s defense-related manufacturing capabilities. Without major changes and investments in industry and its workforce, America’s security will be threatened, if it isn’t already.

Washington has taken some steps in the right direction.

This past March, the Trump administration announced it was implementing steel and aluminum tariffs under Section 232 of the Trade Expansion Act of 1962, which gives the executive branch authority to investigate the effect of imports on national security and to take remedial action.

In the half-year since these tariffs were imposed, both the steel and aluminum industries have revived, invested and created jobs.

Before the tariffs, a glut of illegally subsidized aluminum and steel dumped on the international market, mostly by China, forced down prices and killed off mills around the world that operated by market economy rules.

The low international price for aluminum, a result of the dumping, decimated the U.S. aluminum industry, one that is vital to America’s military operations. The metal is found in a wide variety of munitions, from planes to Humvees.

Between 1998 and 2017, 18 U.S. aluminum smelters closed, leaving only five standing, and several of those operated at a limited capacity. In 2015, for example, one company, Century Aluminum, slowed production to 40 percent capacity at its Hawesville, Kentucky, smelter, cutting about 300 jobs. More than 8,000 American aluminum workers lost their jobs between 2003 and 2017.

Cut to today, and the contrast couldn’t be more drastic.

When the 10 percent tariffs were imposed across the board on imported aluminum earlier this year, they provided a lifeline to long-struggling U.S. aluminum companies, ones that have always proven they can compete if there is a level playing field.

M7M Chief Executive Officer Bob Prusak testified before the Commerce Department as it investigated the threat of imports to national security. He said tariffs were “nothing short of critical to get us up and running.”

In July, Alcoa restarted its idled smelter in Warrick, Indiana, restoring 275 jobs at the facility, which had closed its aluminum potlines in March of 2016.

After years of near collapse, Century Aluminum plans to invest $150 million to return its Hawesville, Kentucky, smelter to full capacity. One production line resumed in August with 150 new workers. Ultimately 300 will be hired.

The sector is seeing its best days in decades, and the American economy is strong, with unemployment levels near all-time lows. In fact, manufacturing jobs have increased in each month since the tariffs took effect, including in steel- and aluminum-consuming industries like fabricated metal products, which added 7,000 jobs in June alone.

The tariffs are working. The administration was right to impose them—except for one thing.

Canada should have been exempted, just as Australia, Argentina, and Brazil were. Like the United States, Canada is a market economy and does not violate trade rules. U.S. and Canadian production lines are intertwined, with metals produced in Canada shipped to the United States to make parts that are then sent to Canada for final assembly. In addition, the two countries are close allies sharing defense information through North American Aerospace Defense Command (NORAD) and the Five Eyes compact.

AAM’s survey reveals that wish, with 67 percent of voters saying that cheating trade partners like China should be penalized and 80 percent saying the government should invest in technical education and apprenticeships. Seventy-one percent also believe it is time to establish a major national program to repair roads, bridges, and other infrastructure.

Actions like these would make America’s basic foundation stronger and help build on the long-overdue growth of manufacturing over the past few months.

It is a momentum that should not go to waste. It is one the Defense Department knows the nation cannot afford to waste.