Alt-Right Around the World: Here Are 4 Countries Where the Authoritarian Forces Have Been Spreading Their Messages 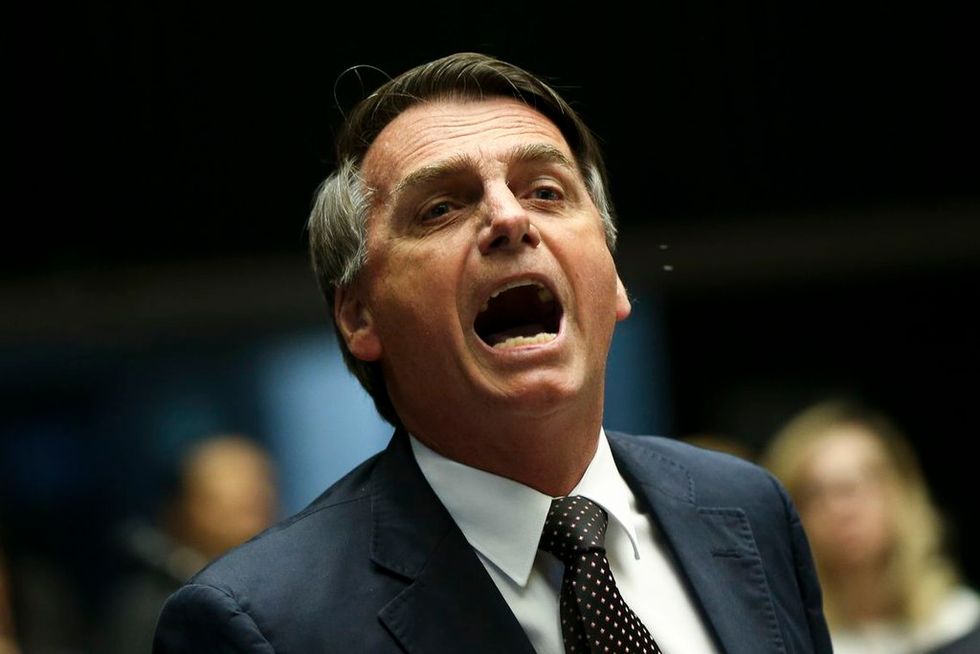 After winning a double-digit victory in Brazil’s presidential election on October 28, the far-right Jair Bolsonaro received a phone call from an ardent supporter: President Donald Trump. On Twitter, Trump posted, “Had a very good conversation with the newly elected President of Brazil, Jair Bolsonaro, who won his race by a substantial margin. We agreed that Brazil and the United States will work closely together on Trade, Military and everything else! Excellent call, wished him congrats!”

It was an example of the American alt-right cheering for the Brazilian alt-right. Steve Bannon (former White House chief strategist under Trump) has also been an enthusiastic Bolsonaro supporter, as have the staff of Breitbart News. For all its isolationist America-first rhetoric, the American alt-right has been finding common ground with extremists and authoritarians in other countries—including Bolsonaro, who the Brazilian press has dubbed “The Trump of the Tropics” because of his extreme nationalism, racist remarks, overt misogyny and history of praising dictators.

Here are four countries where the American alt-right has been openly supportive of white nationalists and authoritarians—and in some cases, has been networking with them.

When centrist/neoliberal Emmanuel Macron defeated white nationalist and National Front leader Marine Le Pen by 65-34% in France’s 2017 presidential race, it was characterized as a landslide rejection of racism and bigotry. Le Pen lost by 31%, but here’s the frightening part: about one in three French voters supported her—which would be sort of like David Duke winning one-third of the vote in a presidential race in the United States. Unfortunately, the National Front isn’t going away, and Steve Bannon sees the obvious parallels between Trump’s presidency and the French white nationalist/anti-immigrant movement that Le Pen is leading.

Many immigrants and people of color felt like they dodged quite a bullet when Marine Le Pen lost to Macron last year in France. But in Brazil’s 2018 presidential election, an equally racist and far-right candidate, Jair Bolsonaro, defeated former SÃ£o Paulo Mayor Fernando Haddad (who ran with the left-wing Workers Party) by 11% over the weekend.

Bolsonaro, dubbed “The Trump of the Tropics,” is as anti-gay as he is anti-black; he once said he “would prefer my son to die in an accident” than be gay, and he has described Brazilian blacks as “lazy and fat.”

Further, Bolsonaro has praised the military dictatorship that plagued Brazil in the 1960s and 1970s as well as Gen. August Pinochet’s fascist regime in Chile, although he has complained that both of them should have killed more people. In 2018, Chile is a thriving democracy and one of Latin America’s most developed economies, but the Pinochet regime that seized power in the 1970s (with the help of the CIA) was a notoriously brutal dictatorship—and yet, Brazil’s president-elect argues that Pinochet wasn’t brutal enough.

Bolsonaro’s campaign enjoyed plenty of favorable coverage from Breitbart News as well as the endorsement of Steve Bannon. And Gab.ai (a Philadelphia-based social media platform often described as an alt-right alternative to Twitter) is wildly popular among Bolsonaro supporters (according to the firm Alto Data Analytics). One of Bolsonaro’s sons, Flavio Bolsonaro, has a profile on Gab.ai, and Flavio’s brother, Eduardo Bolsonaro, used the platform to post a photo of himself with Bannon.

Gai.ai founder Andrew Torba, a Bolsonaro enthusiast, declared, “When Bolsonaro joins Gab, Twitter will be dead in Brazil—and the media will panic.”

In March, Hungarian journalist Kata KarÃ¡th wrote an informative article for The Guardian decrying the white nationalist ideology of Hungarian Prime Minister Viktor OrbÃ¡n and asserting that Hungary’s true culture is one of multiculturalism and diversity—not exclusion and bigotry. But to the American alt-right, OrbÃ¡n is a hero who, like President Trump or Marine Le Pen, isn’t afraid to stand up for white Christian values. Bannon has been an enthusiastic supporter of OrbÃ¡n, speaking in Budapest and applauding the Hungarian prime minister (who was elected to a third term in April). OrbÃ¡n, in turn, has applauded Bannon for acknowledging Europe’s anti-multicultural movement—and OrbÃ¡n sounds a lot like Trump when he paints Hungarian billionaire investor/philanthropist George Soros as a left-wing boogieman who is committed to destroying white culture in Europe.

During the Cold War, Republicans—and Democrats as well, for that matter—were vehemently disdainful of the Soviet Union, often saying that 20th Century Russian culture lacked the love of democratic values one found in the U.S. or Western Europe. And long after the end of the Cold War and the fall of the Soviet Union, Republican Sen. John McCain was a blistering critic of Russian President Vladimir Putin (who he denounced as a “thug” and a “tyrant”). But to the alt-right, McCain was a RINO (Republican In Name Only) and a “cuckservative”: a right-winger who wasn’t right-wing enough and was soft on liberals and multiculturalism.  While McCain had no use for Putin, the alt-right openly applauds his authoritarianism.

Trump, as president, has had a much friendlier rapport with Putin than the Obama Administration, and Putin is also admired by everyone from Bannon and Breitbart News to white nationalist Richard B. Spencer to the anti-feminist website Return of Kings (which has published numerous pro-Putin articles). In 2014, the racist Michael Hill (president of the League of the South) declared, “I have more in common with Vladimir Putin than I do with Barack Obama….One upholds an ancient Christian tradition; the other deplores the Christian faith.”

Actually, Barack and Michelle Obama have a long history of attending church—much more so than Trump. But the Obamas were greatly influenced by the African-American church and Mainline Protestantism, which are much different from the far-right white nationalist approach to Christianity exemplified by Hill.

In October 2016, Mike Lofgren wrote an article for The Atlantic that outlined the connection between the Kremlin under Putin and alt-right activists in the U.S. and Western Europe. That was just before Trump won the election, defeating Hillary Clinton in the electoral college but not the popular vote. And two years later, the alt-right continues to be not only a U.S. phenomenon but an international one.