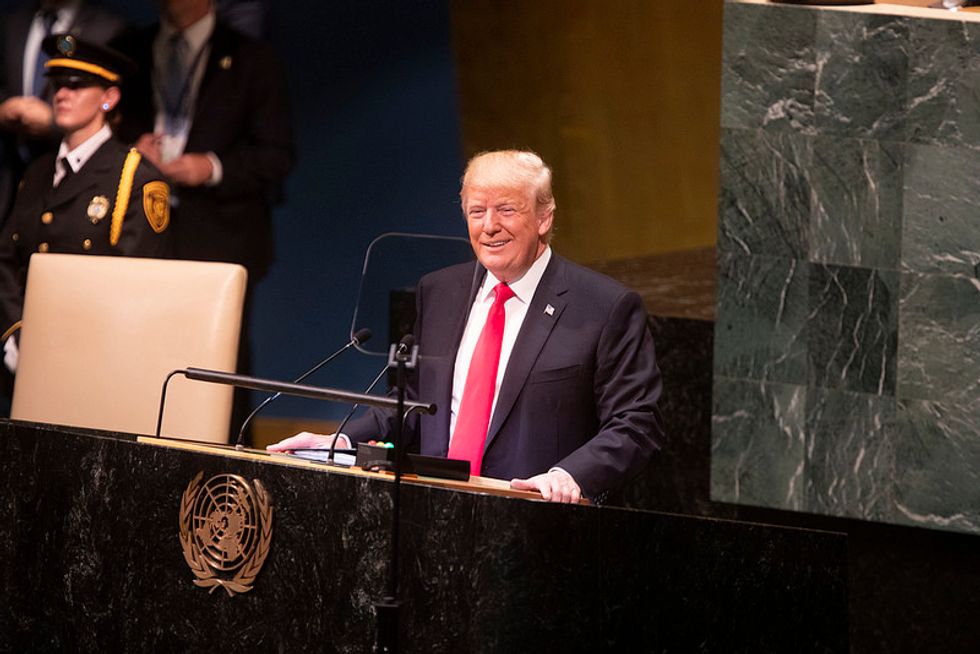 When U.S. President Donald Trump began his speech at the UN General Assembly, laughter erupted from the hall. “In less than two years,” Trump said, “my administration has accomplished more than almost any administration in the entire history of our country.” There was a pause. Then, Trump continued, “America’s—so true”—but he was interrupted by laughter. Not laughter at a joke that Trump had cracked. Nothing like that. The laughter was directed at him. “Didn’t expect that reaction,” Trump said, “but that’s OK.” There was more laughter, even raucous laughter.

The delegates from the 192 other member states sitting in the hall of the General Assembly found Trump’s brashness funny. Two delegates from two different countries in Asia told me that there is something about Trump’s braggadocio that amuses many of them. “It is a little bit like the super-size culture” of the United States, one delegate said—everything is bigger, the buildings, the fast food, the cups of coffee. The other delegate laughed when I asked about the laughter—there was an infectious feeling in the hall. It was like being in a comedy club. Even before the comic gets into the heart of the jokes, the joy of being there, the excitement of the coming joke, provokes premature laughter. That was what happened when Trump spoke.

The Birth of a Fractured World Order

Laughter should have followed the rest of his speech, but it did not. Many of the delegates found it a dangerous speech, a belligerent speech with U.S. guns focused on Iran and Venezuela. All the talk about economic nationalism and sovereignty did not make sense, said a delegate from Asia. If the U.S. were truly turning inward, the delegate said, then it should not threaten countries with military and economic war. What those threats do is create further instability and distrust and lead this fragile world order into uncharted territory.

Unlike in 2003, the U.S. is no longer the most powerful country in the world—even though it has the deadliest military. Talk of multilateralism from the UN General Secretary downwards flooded the chamber not on idealistic terms but because there is a firm sense that other powers have now staked their place in the world order.

The peace arrangement in Korea, despite Trump trying to take credit for it, is a sign of the consolidation of China and Russia’s joint project in the Pacific rim of Asia. Little was said in the Western press about the Eastern Economic Forum—held in Vladivostok, Russia, earlier this month—where China, Russia, the Koreas and Japan came to an understanding about the way forward on the Korean peninsula. The United States and Europe had no role in that crucial meeting. Nor in the last meeting held between North Korea’s Kim Jong-un and South Korea’s Moon Jae-in. Similarly, the deal between Russia and Turkey to suspend full-scale conflict in Idlib, Syria, came from a discussion that included Syria and Iran but excluded the United States and the Europeans. These moves—alongside the Chinese economic projects across Asia—suggest that a new, fractured world order is under construction. The United States has little role in this emerging universe.

A few days before he came to the UN General Assembly, Trump sat with the Colombian president IvÃ¡n Duque and with White House Chief of Staff John Kelly. Fortunately, the Venezuelan journalist Lohena ReverÃ³n taped the quite ugly remarks. Trump began to talk about the drone attack on Venezuela’s President Nicolas Maduro. Trump and Kelly joked about how when the drone appeared, the military parade scattered. “That’s not good,” Trump said, suggesting that the Venezuelan military has limited morale. Because of this, Trump said, the Venezuelan government “frankly could be toppled very quickly by the military, if the military decides to do that.”

On September 26, Trump repeated these comments, saying, “Every option is on the table with respect to Venezuela.” The term “every option” refers directly to military intervention.

At the UN General Assembly, Trump criticized the Iranian government as he had attacked the Venezuelan government earlier. He accused Iran of an “agenda of aggression and expansion” and announced new sanctions against Iran to go into effect on November 5. Iran’s government has been open to wide-ranging discussion with the United States, as long as the U.S. respects the nuclear treaty that went into effect in 2015. It is the United States that had withdrawn from the treaty, and it is Trump’s team that has been speaking aggressively about Iran.

The United States offered no words of solidarity with the people of Venezuela or Iran or even the militaries of these two countries, which had been attacked over the course of the past two months. He had already mocked the Venezuelan military. He remained silent about the 30 people killed at the Iranian parade. Human sentiment is not within Trump’s range. His were words of iron.

There was no hope in Trump’s speech. It was vintage ugliness—threats against this and that power, disregard for the process of diplomacy.

Allies are going to be hard to find for the Trump administration. In his speech, he listed India, Israel, Poland and Saudi Arabia. None of these countries would be willing to directly join in a U.S. adventure against Venezuela or even against Iran. Trump’s war—if there is to be a war—would pit U.S. troops against these two countries, with no support from the member-states of the United Nations.

European powers met on the side of the UN to affirm their support for the nuclear deal. They have tried—unsuccessfully—to create a legal shield to protect European firms from U.S. penalties if they continue to trade with Iran. China is nonplussed. It has openly broken U.S. sanctions and will continue to do so. China and the United Arab Emirates are Iran’s largest trading partners, with the European Union at no. 3 (Italy is the largest trade partner for Iran within the European Union). Close to 700,000 barrels of Iranian oil go to China each day. Chinese businesses have major stakes in Iran’s economy. Chinese cranes hover across Tehran’s skyline, indicating the role of China in Iran’s economy. Neither the Europeans nor the Chinese would allow the U.S. to escalate military action against Iran. It is simply not in their interest.

Nor do the Latin American states want the U.S. to invade Venezuela. After Trump made his comments, the Secretary General of the Organization of American States—Luis Almagro—said that “with respect to a military intervention” he felt that no “option should be ruled out.” But, these comments did not go down well in the Lima Group, a 14-member state bloc formed in 2017 with the United States at its core to pressure the government of Venezuela. The Lima Group’s statement said it wanted a “peaceful and negotiated” settlement, not a military intervention. Colombia did not sign the statement, but said it agreed with its sentiment. Such an intervention would be very unpopular in Latin America. It would be impossible if the left wins the election in Brazil on October 7.

The Smell of Sulfur

At the 2006 opening of the UN General Assembly, Venezuela’s president Hugo ChÃ¡vez took to the podium the day after U.S. president George W. Bush had been there. The United States’ illegal war on Iraq remained a sensitive issue, and the U.S. was pushing for war against Iran and Syria. ChÃ¡vez opened his statement with characteristic brio: “The devil came here yesterday, and it smells of sulfur still today.” The delegates laughed. This was funny.

Trump does not fit into the suit of the devil. There is nothing devilish about him. His is the costume of the buffoon; he is the leader of a country whose influence in the world has declined dramatically. It is expected that Trump would threaten everyone. It is even a concern that Trump—being in charge of such a vast and powerful military—might bomb someone. But it is thought that the United States is no longer able to move an agenda in the way that it did in 2003.