Here's Why Gov. Jerry Brown Stands in the Way of Climate Justice 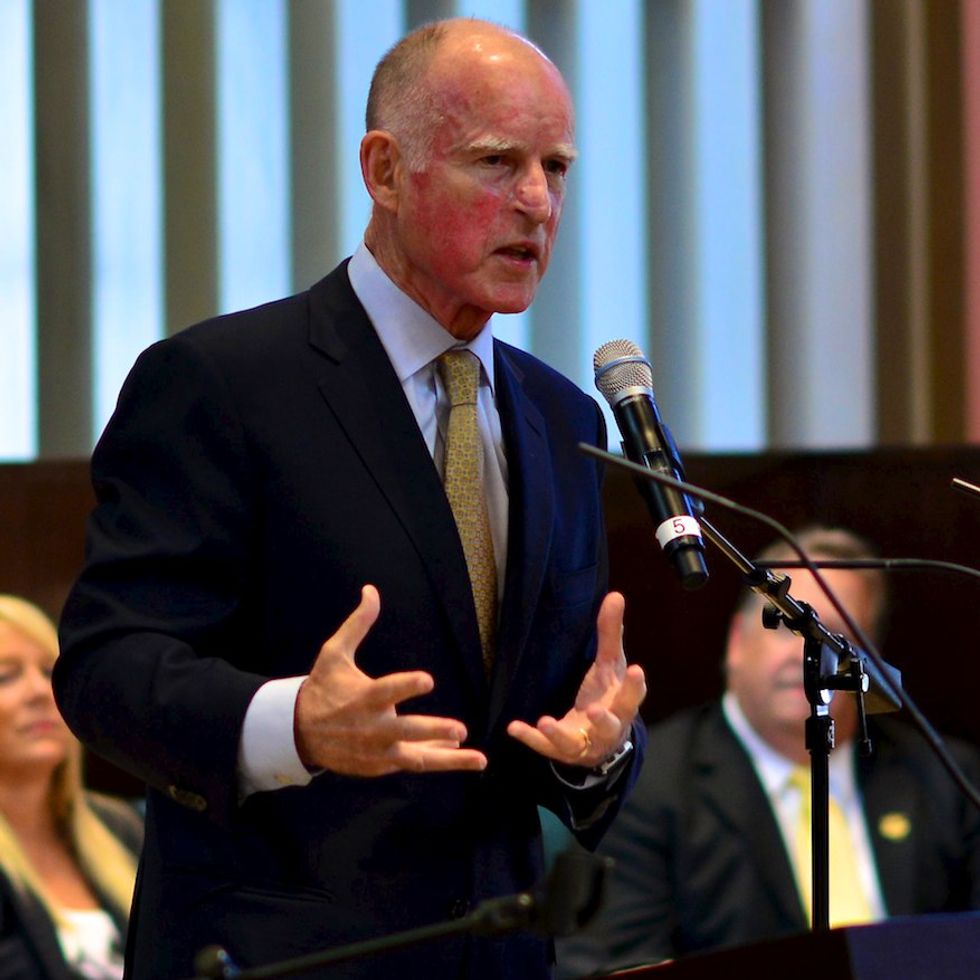 There is an oily sheen on California’s status as global climate leader: The state’s oil is among the dirtiest and most carbon-intensive crude in the world. Yet, Gov. Jerry Brown has approved more than 20,000 new oil wells in California during the past eight years.

Further, the state’s “Reducing Emissions from Deforestation and Degradation,” or REDD plan, purports to offset the emissions from new wells with forest leases in the Global South. Instead, what we need is real action to move California away from increasing dirty oil-and-gas production and accountability to ensure that the state’s carbon-neutral goals do not result in carbon trading and seizures of Indigenous lands in Central and South America.

Governor Brown’s affair with big oil and gas is also a major environmental justice issue. A new analysis found that 77 percent of the new oil wells approved during his tenure are in low-income communities and communities of color.

This month, Governor Brown summoned the first-ever Global Climate Action Summit, to celebrate governments, companies and investors focused on climate. Unfortunately, many of California’s own grassroots leaders who know what’s best for the health of their communities and environments weren’t invited to this exclusive gathering.

Instead, the summit focused on “market-based schemes” like REDD and other cap-and-trade carbon trading systems that fail to consider the health and safety impacts of fossil-fuel extraction upon local and Indigenous communities. But to reach carbon neutrality, we need to keep fossil fuels in the ground, keep forests standing and respect Indigenous rights.

In response, counter-summits were held. “It Takes Roots,” for example, organized its own “Solidarity to Solutions Week” in which grassroots groups from across the globe came together to share solutions to climate change and address fossil-fuel impacts on Indigenous lands and poor communities where extractive industries create daily toxic threats.

On September 13, advocates blocked the entrance to Governor Brown’s Climate and Forest Task Force meeting and risked arrest as they demanded entry. Calling out the false solutions like REDD that the task force continues to push, local and international Indigenous leaders delivered an open letter to Governor Brown and members of the task force.

“You cannot commodify the sacred -- we reject these market based climate change solutions and projects like the Reducing Emissions from Deforestation and Forest Degradation program (REDD+), because they are false solutions that further destroy our rights, our ability to use our forests, and our sovereignty and self-determination. The Governors Climate and Forests Task Force does not represent us and has no authority over our peoples and territories.”

Carbon pricing, including carbon trading, carbon taxes and carbon offsets, are false solutions to climate change that do not keep fossil fuels in the ground. Instead, carbon pricing and REDD pretend to remedy the situation after the fact. These are fraudulent climate mitigation mechanisms that, in fact, help corporations and governments keep extracting and burning fossil fuels.

California’s own climate change bill, AB 32, which has a cap-and-trade provision, has failed to protect Black, Latino and Indigenous communities from emissions that cause asthma and cancer. A University of Southern California study found that many of the state’s worst polluters—all companies registered under AB 32’s cap-and-trade program—increased their emissions of localized toxic air pollutants despite decreases in their greenhouse gas emissions.

The California state legislature recently passed SB 100, a valiant effort to reduce the use of fossil fuels to generate the state’s electricity, but the bill fails to address fossil-fuel drilling in Californians’ backyards.

Instead, Governor Brown continues to willfully ignore the health threats faced by the thousands of local residents forced to live next to oil-and-gas operations. Every day that action is delayed, the health of communities is being harmed by the reproductive, developmental and respiratory toxins that are used in California’s oil fields.

In 2017, when faced with Indigenous protesters calling for him to “keep oil in the ground,” Governor Brown responded that protesters should themselves be put “in the ground.” One year later, the governor faces a growing chorus of environmental, public health, faith, labor and community groups that are calling on him to confront California’s oil-and-gas production.

In April, these diverse groups formalized as the “Brown’s Last Chance” campaign, demanding a halt to new oil-and-gas extraction, along with a transition plan for a full phaseout from fossil fuels. More than 800 organizations have signed on, and more than two dozen climate scientists endorsed the campaign. They warned that a phaseout of oil-and-gas production is necessary to meet the climate targets of the Paris Agreement and protect the public health of millions of Californians living near oil-and-gas wells. Other groups calling on Governor Brown to address the state’s oil-and-gas extraction include more than 100 local elected officials across California and six women Nobel laureates.

What Governor Brown needs to understand is that the majority, not the minority, are calling for true climate leadership. As the world’s sixth-largest economy, California has the potential to serve as a climate model for other states and nations alike. But Brown’s Global Climate Action Summit proved to be nothing more than a trade show set to line the pockets of fossil-fuel corporations. We will not allow our futures to be traded away. With tremendous people power, led by frontline and Indigenous leadership, we took to the streets to advocate for real community-led solutions. Real climate leadership is actionable and accountable. We need action to move California away from increasing dirty oil and gas production and we need accountability that carbon neutral goals do not result in carbon trading and land grabs of forests on Indigenous lands. Fighting climate change means fighting for climate justice.