Watch Flint Residents Express Anger that Their Families Don't Yet Have Clean Water: 'We Are Still Suffering' 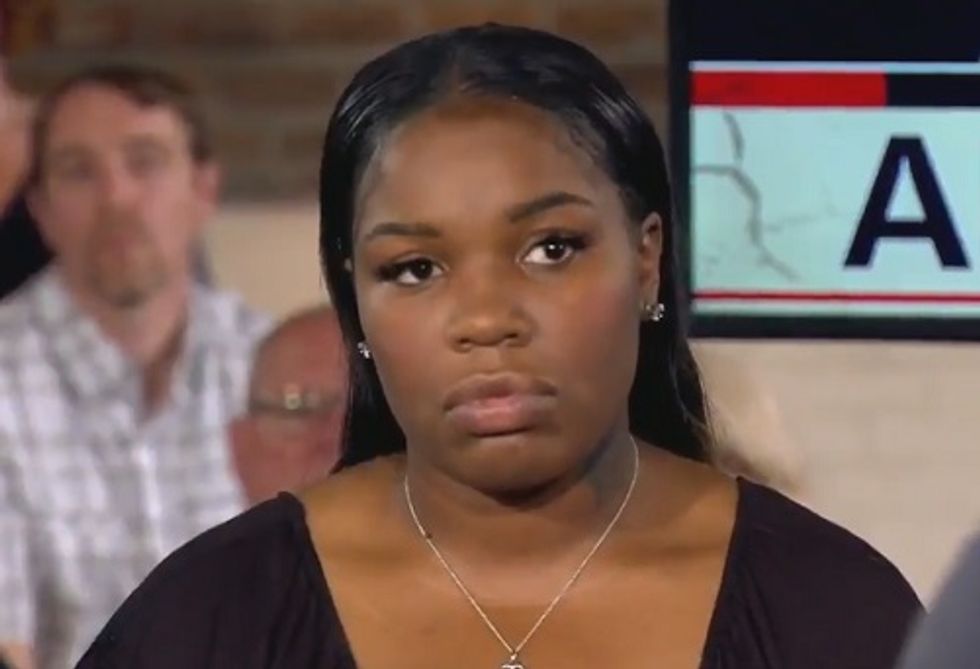 Four years after the sordid saga began, but the water crisis in Flint, Michigan is still not over, even while the public consciousness has moved on.

In a discussion with MSNBC's Chris Hayes and liberal filmmaker Michael Moore on Wednesday at an event in Flint, Ariana Hawk, a local mother and water activist, described the ongoing struggle that her family, and countless others, continue to face.

"Ariana, your son, as someone who has lived this firsthand, seen it firsthand, how do you feel about the prosecutions, about accountability and whether anyone's been held to account?" asked Hayes.

"Too long," replied Hawk. "If this would have been a normal person on the street, they would have been tried by now, be in jail by now and have justice. For this to be going on for so long, it makes me angry. But the lawyers are sitting up, sucking up all this money that we are still suffering, our pipes are still not replaced. This is a problem."

"People are watching this, there are some people watching this who kind of remember about the Flint water thing, and then maybe it's drifted away from their mind, like, you're living this every day," Hayes continued. "What can you tell them about what the reality is here now four years later?"

"Four years later, my son, for example, we still can't safely use our water, he can't take a bath without telling me it burns," Hawk replied. "His rashes are back. You know, things are not better. I'm still scared to use the water, I don't want to let my younger kids use the water. I have an 11-year-old who's facing memory loss. He's 11, he can't remember what happened yesterday. These are the reality of things happening to our babies right now."

"People in here, you — are people using their water at home?" Hayes asked the crowd at large, to general shouts of "No!"

"There are people in here who once a week," chimed in Moore, "if they have a relative in Detroit an hour away, take their children for their once a week shower, an hour away just to take a shower."

The Flint water crisis began in 2014, when the city of Flint, at the behest of state-appointed emergency managers, switched its water source from Detroit to the Flint River, as a cost-saving measure. With insufficient treatment, the water leached lead from service lines and contaminated the city's water, exposing 100,000 people. An ensuing Legionnaires' Disease outbreak killed at least 12 people and possibly many more.

Ultimately, the disaster resulted in felony charges against several state officials, including Michigan Department of Health director Nick Lyon, who faces involuntary manslaughter for failing to warn the public about the Legionnaires' outbreak. Gov. Rick Snyder, who appointed the emergency managers and who has reportedly failed to ensure a proper investigation by state agencies, is nonetheless not currently implicated by prosecutors.

Earlier this year, the Michigan Department of Environmental Quality said lead levels in Flint are now within acceptable government limits and are now phasing out bottled water service. But many residents of Flint still do not trust the water in their homes, and scientists argue they have reason to be suspicious — many of the lead service lines that originally contaminated the water supply are still in use, and will not be replaced until 2020.