UN Chief Warns of 'Existential Threat' to Humanity from Climate Change: 'Moving Faster Than We Are' 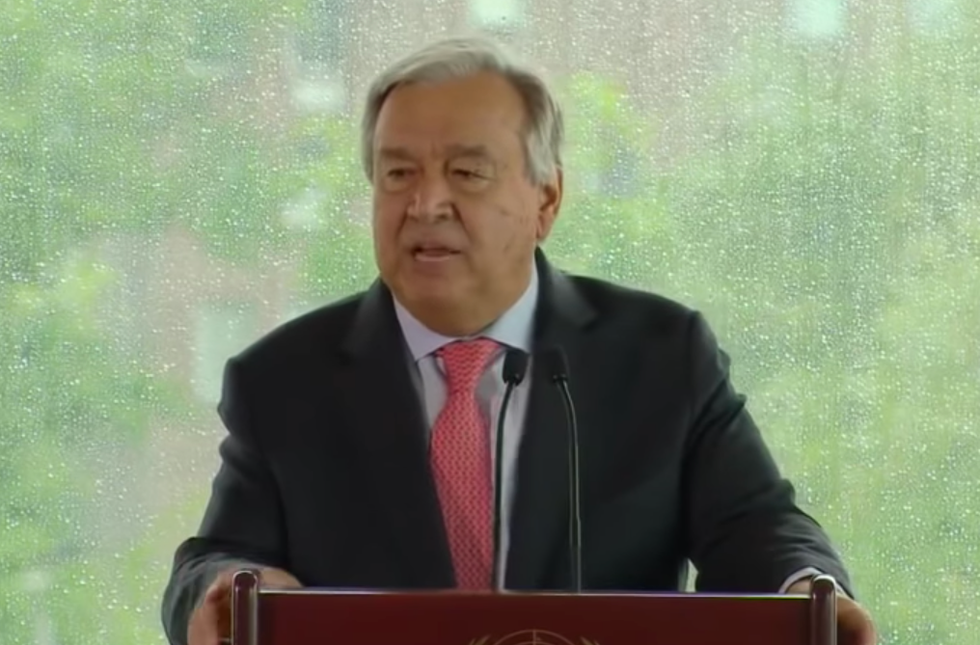 Warning that "we face a direct existential threat" because "climate change is moving faster than we are," United Nations Secretary-General AntÃ³nio Guterres, in a speech at the U.N.'s New York headquarters on Monday, demanded urgent action from world leaders to combat "the defining issue of our time."

In the wake of worldwide #RiseForClimate protests over the weekend, which brought more than 250,000 people into the streets to call for bolder action to address the global crisis, the U.N. chief declared, "If we do not change course by 2020, we risk missing the point where we can avoid runaway climate change, with disastrous consequences for people and all the natural systems that sustain us."

Climate change is the defining issue of our time – and we are at a defining moment. If we do not change course by 2020, we could miss our chance to avoid the disastrous consequences of runaway climate change. The time for ambitious #ClimateAction is now. https://t.co/Ad19hj3zsD pic.twitter.com/VykZtbYDUi

Researchers from around the world continue to raise alarm about the dire consequences of burning fossil fuels that generate planet-warming emissions.

Recent reports have detailed how the global climate crisis makes extreme weather more likely; how accelerated Arctic warming is stalling summer weather over North America, Europe, and Asia, which could lead to "very-extreme extremes"; and the precise threats to certain regions—such as California, which faces a future of dangerous heat waves, devastating wildfires, intense rain events, and costly sea-level rise.

The "Hothouse Earth" study provoked a flood of "breathless headlines" last month for its warnings of a possible domino effect of climate feedback loops that could lead to runaway global warming—though at least one of its co-authors optimistically positedafter all of the media attention that "people will look back on 2018 as the year when climate reality hit."

"Scientists have been telling us for decades. Over and over again. Far too many leaders have refused to listen. Far too few have acted with the vision the science demands," Guterres noted Monday. "Dear friends, we know what is happening to our planet. We know what we need to do. And we even know how to do it. But sadly, the ambition of our action is nowhere near where it needs to be."

Calling the Paris climate agreement the "bare minimum," Guterres pointed out that states who support the accord—every nation on the planet but the United States, thanks to President Donald Trump's decision to bail on it last year—are failing to live up to its inadequate goals.

"We have the moral and economic incentives to act. What is still missing—still, even after Paris—is the leadership, and the sense of urgency and true commitment to [a] decisive multilateral response," Guterres concluded. "Our fate is in our hands. The world is counting on all of us to rise to the challenge before it's too late."

Guterres also turned to Twitter on Monday to highlight a new Guardian op-ed from New York Mayor Bill de Blasio and London Mayor Sadiq Khan, who challenged all cities to join the global divestment movement and announced a new forum, which their cities will co-chair, to share tools and tips for divesting from fossil fuels and investing in green energy.

The op-ed and the secretary-general's remarks came ahead of the Global Climate Action Summit that California Gov. Jerry Brown, a Democrat, will host in San Francisco this week. In his speech, Guterres also urged world leaders to attend a New York climate forum he has organized for September of 2019 to discuss countries' progress on the Paris goals.