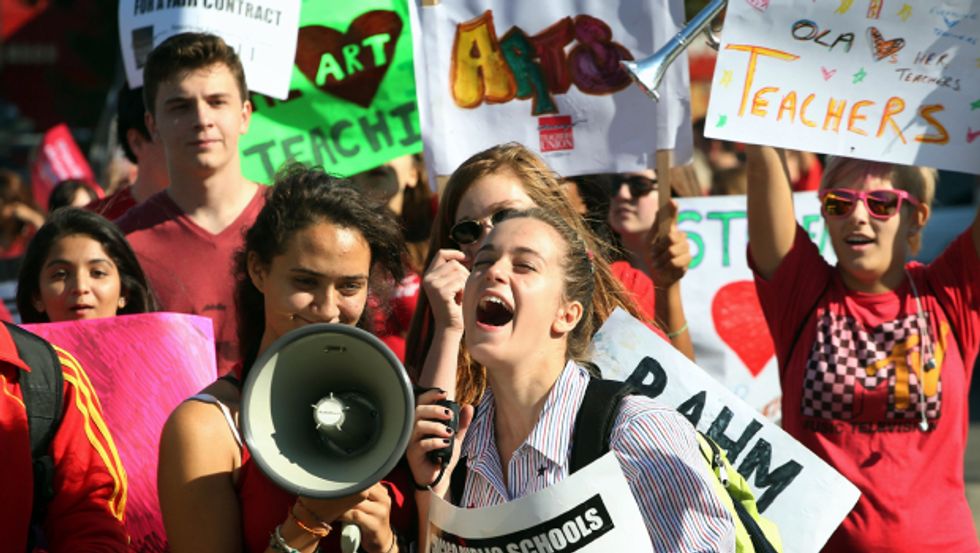 Teachers are underpaid, say a majority of Americans … and they’re right. Two new studies give different angles on just how underpaid teachers are these days. Teacher pay has dropped since the recession, one finds, and teachers are more and more underpaid relative to other workers with similar qualifications, says the other.

Brookings fellow Michael Hansen looked into the theory that teacher pay dropped because experienced teachers retired and were replaced by younger, cheaper teachers. Not so. Not only has teacher pay declined by 2.2 percent, after adjusting for inflation, but teachers are older and more qualified than they were before the recession, with higher percentages having masters and doctoral degrees. That means pay should have gone up, creating a larger combined deficit of 3.5 percent.

That’s a drop for teachers now vs. teachers just over a decade ago. There’s an even bigger problem when you compare teachers with other college graduates, as Economic Policy Institute researchers Sylvia Allegretto and Lawrence Mishel did. Looking at the period from 1996 to 2017, they find a slight drop in teacher pay while wages for other college graduates rose by more than $100 per week.

For all public-sector teachers, the relative wage gap (regression-adjusted for education, experience, and other factors known to affect earnings) has grown substantially since the mid-1990s. The teacher wage penalty was 1.8 percent in 1994, grew to 4.3 percent in 1996, and reached a record 18.7 percent in 2017.

Teachers do have an advantage in the benefits they earn, but it’s not enough to overcome the pay deficit: “The bottom line is that the teacher compensation penalty grew by 11.4 percentage points from 1994 to 2017.”

A recent study found that most of the 25 states that were still spending less for K–12 education in 2016 than before the recession had also enacted tax cuts between 2008 and 2016. In fact, eight of the 10 states with the largest reductions in education funding since 2008 were states that had reduced their overall “tax effort”—meaning through tax cuts or other measures they were collecting less in taxes relative to their capacity to generate tax revenue. These eight states were Alabama, Arizona, Florida, Georgia, Idaho, Kansas, Oklahoma, and Virginia.

Low teacher pay is on the way to becoming a crisis, as that and other attacks on the profession make teaching a less appealing career for young people. That, of course, is as Republicans want it, though they didn’t foresee the teacher uprising that tax cuts coupled with low teacher pay and inadequate education funding would give rise to over the past year. But while that wave of activism has produced real change in several states, a greater change needs to come.