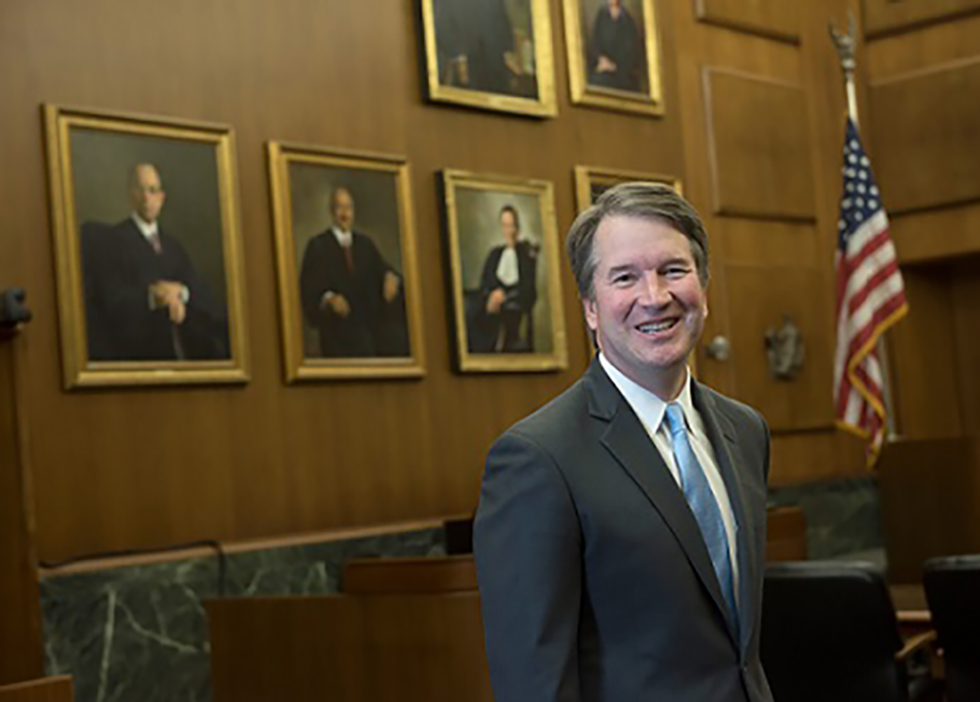 The very fact of Brett Kavanaugh's nomination to the Supreme Court remains a problem for the nation. It's entirely likely Kavanaugh ended up sitting before the Senate Judiciary Committee last week for one reason and one reason only: his well-known and vocal criticism of investigations into sitting presidents.

As several Democrats pointed out in last week's hearings, unindicted co-conspirator Donald Trump didn't even have Kavanaugh on his list of potential nominees until last November, six months into Robert Mueller's Russia probe. "In this age of President Donald Trump," said Illinois Sen. Dick Durbin, "this expansive view of presidential power takes on added significance." That led Durbin and his Democratic colleagues including Richard Blumenthal of Connecticut, Cory Booker of New Jersey, and California’s Kamala Harris to try repeatedly to get at just how loyal Kavanaugh would be to Trump, and the answer was: extremely.

Kavanaugh had multiple opportunities to alleviate senators’ concerns that he was picked precisely because he'd use his belief in executive power to protect Trump by saying he would recuse himself from any cases—criminal or civil—involving Trump. "Why not right now, right now, even at the jeopardy of President Trump pulling back your nomination, why not now alleviate all of that suspicion that a reasonable person can have?" Booker asked him at one point. "Why not just announce right now that you will recuse yourself from any matters coming before the Supreme Court involving the Mueller investigation?" Kavanaugh's answer was characteristically meaningless: "If I committed to deciding a particular case, which includes committing to whether I would participate in a particular case, all I would be doing is demonstrating that I don't have the independence of the judiciary […] that is necessary to be a good judge." He invoked the mealy-mouthed "independence of the judiciary" at least half a dozen times in refusing to iterate his independence from Trump.

Kavanaugh didn't even reach the Neil Gorsuch standard of distance from Trump. When Gorsuch was asked about Trump's regular attacks on federal judges, he could at least muster enough backbone to say he found them "demoralizing" and "disheartening." That mild criticism enraged Trump, and he reportedly even considered rescinding the nomination. Kavanaugh wasn't going anywhere near answering any question about Trump and his disrespect for the third branch. "I'm not going to get within three zip codes," of that issue he told senators. He wouldn't condemn Trump's attempts to politicize the Justice Department, refusing to answer if it is okay for Trump to say out loud that corrupt Republicans shouldn't be prosecuted because it will hurt the GOP's chances of keeping control of the House in the midterms. He declined to comment on Trump's assertion that there were "good people on both sides" in the Charlottesville white supremacist rally last year.

On the final day of testimony Friday, John Dean, the former Nixon White House counsel who was charged with obstruction of justice and spent four months in prison for his role in the Watergate cover-up, spoke against Kavanaugh from his experience. Kavanaugh on the Supreme Court, he said, would make it the "most presidential-powers friendly" court in the modern age. "Under Judge Kavanaugh's recommendation," he testified, "if a president shot someone in cold blood on Fifth Avenue, that president could not be prosecuted while in office."

"There is much to fear from an unchecked president who is inclined to abuse his powers," Dean said. "That is a fact I can attest to from personal experience." As for Republicans and their massive cover-up of documents in this nomination, Dean was succinct: "Frankly I'm surprised that Judge Kavanaugh has not demanded every document that he's ever handled to be reviewed by this committee. Unless of course, there's something to hide." Judging by the the number of Kavanaugh's exposed lies in the handful of documents that have been released, he has a great deal to hide.

Kavanaugh was nominated to protect Trump. He is, as a blistering editorial opposing his confirmation from The New York Times says, the "perfect nominee for a president with no clear relation to the truth." Republicans are trying to rush him onto the court to protect Trump, and they don't care how much he lied to them to get there.