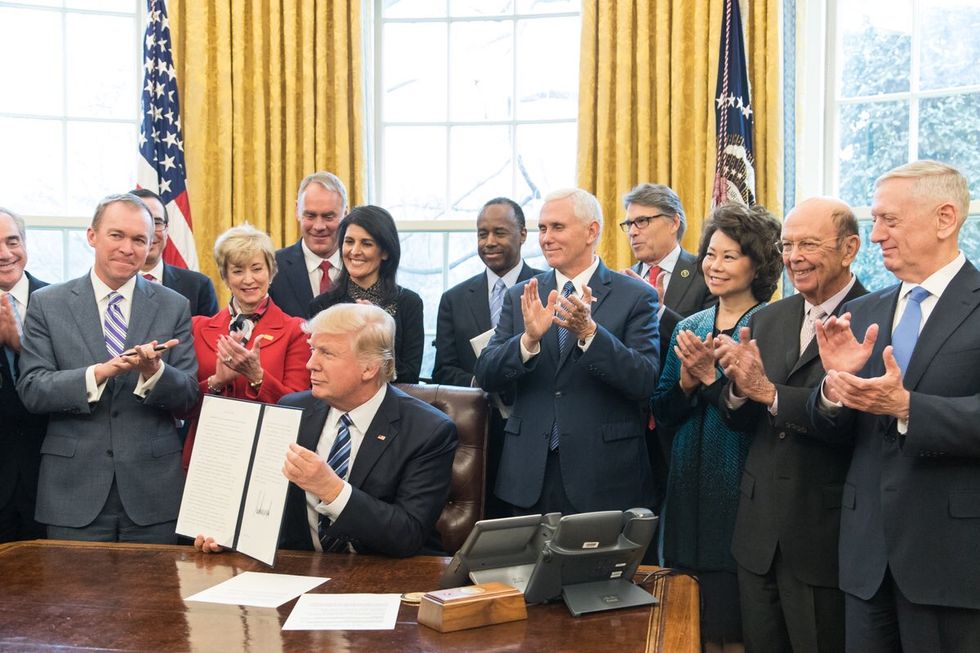 The Conversation
and
Bert Spector
September 10, 2018

The Trump White House has endured a lot of bad publicity in its short lifespan, but recent disclosures may be among the worst.

On Sept. 4, an early account of Bob Woodward’s new book revealed the “nervous breakdown” unfolding within the Trump administration. Then, the next afternoon, a “senior official” went public – albeit anonymously – with an op-ed piece in The New York Times.

What we’ve learned is that many of the president’s top aides “are working diligently from within to frustrate parts of his agenda and his worst inclinations,” such as by stealing a document from his desk. A “quiet resistance” is trying to prevent Trump from taking actions “detrimental to the health of our republic.”

As a business professor, I find myself wondering how this might play out in the highest ranks of a public corporation if they were anywhere near this chaotic. In my view, its board, faced with similar behaviors, would say to its CEO: “You’re fired!”

The latest insights into this apparently “off-the-rails” administration are entirely consistent with revelations offered from other less credible sources.

While they are certainly shocking and cause for intense concern, no one should be surprised given Trump’s background.

In the first month of Trump’s term, I wrote an article for The Conversation noting how Trump’s experience as the head of a private, family-owned business ill-prepared himfor the demands of the presidency.

That’s because leaders of privately held companies do not face the governance constraints that impose limits on the behaviors of CEOs who run public corporations. Private company CEOs have no independent board of directors to answer to, no requirements of transparency imposed by the Securities and Exchange Commission and no requirement for outside accounting oversight.

While private, family-run businesses can be models of effective governance, we know little of real substance about the Trump Organization. His obsession with secrecymakes any true assessment impossible.

We do know Trump was accountable to no one. He surrounded himself with his children and people – including his once-loyal “fixer” Michael Cohen – who served only him.

His one attempt at leading a public corporation, operating within the governance constraints imposed by law and regulation, proved to be an unmitigated disaster – for public investors, anyway.

The board steps in

Public companies are governed differently. And boards of directors, half of whose members must be independent, take their legally established responsibilities seriously.

For example, their fiduciary responsibility requires directors to act in the best interests of the corporation. Their supervisory role involves oversight of the CEO and other officers. And their duty of care obligates close and regular attention to the functioning of the corporation.

With these duties in mind, boards have ousted CEOs – or, more commonly, forced them to resign.

Often, boards simply lose faith in the strategy the CEO is pursuing. That’s what happened at Hewlett Packard when the board fired Carly Fiorina in 2005, a few years after the disastrous acquisition of rival computer maker Compaq destroyed half of HP’s market value.

But boards have also been known to step in – and are doing so at an increasing pace – when the personal behavior of the CEO crosses a line and threatens to harm the company’s well-being.

For example, in early 2017, Uber’s financial performance under founder Travis Kalanick seemed just fine. But board members were growing alarmed by the results of an internal employee attitude survey and shocked when a smartphone video captured Kalanick shouting at his Uber driver. By March he was gone – not fired but clearly forced to step down.

And just a few months ago, the tenure of another iconic founder, Papa John’s very own John Schnatter, came to a similar end. There were no complaints about business performance. The issue was his use of racially charged language, which led the board to force him out of the chairman’s seat – only a year after he lost the CEO role for other disruptive behavior.

A key point in these examples is that even though the executive’s behavior triggered the removal, the company’s financial performance was still at the top of directors’ minds. For example, Papa John’s sales plunged when word spread of his use of a racial slur. Bad behaviors by the CEO will eventually reflect poorly on the company and hurt its performance.

The reality is that boards can lose confidence in their CEOs for many reasons. When that happens, governance rules demand that they take action in the best interests of the corporation.

And this is where the importance of independent board members – who have no ties to the CEO or another employee of the company – comes in. They regularly review the CEO’s performance and are responsible for hiring outside auditors to ensure appropriate and reliance internal control systems.

Finally, even when a a board fails in its duties, shareholder activists and large institutional investors can – and increasingly do – demand accountability.

What is stunning to me in light of recent disclosures is what they reveal about the apparent weakness of governance mechanisms within the federal government.

That’s not to say such mechanisms don’t exist. The Founding Fathers wrote explicit checks and balances into the U.S. Constitution. Congress was meant to act as a co-equal branch to mitigate possible overstepping and abuses by the chief executive. But there has been a complete collapse of constitutional oversight by Congress.

Presidents cannot be fired, exactly. But in extreme cases, they can be removed. The U.S. Constitution offers two mechanisms to do just that. Article 3, Section 3, Clause 1 says a president can be impeached by the House and removed by the Senate for “high crimes and misdemeanors” – however lawmakers choose to define them.

And the 25th Amendment allows the vice president and a majority of the Cabinet to declare the president “unable to discharge the powers and duties of his office,” which would ultimately require two-thirds majorities of both houses of Congress to sustain – an extraordinarily high hurdle, for good reason.

These mechanisms, however, ultimately depend on the willingness of Congress to accept something like a corporate board’s fiduciary and care responsibilities. Even without going through the slow process of impeachment, presidents can also be pressured to resign, in the same way a board insists that a CEO “voluntarily” leave. That’s what happened to Richard Nixon in 1974 when impeachment and conviction became a virtual inevitability.

A last mechanism the U.S. has is something like the independent auditor. His name is Robert Mueller. And in my view, it’s the only institutional governance mechanism working – so long as Mueller is not summarily fired, as the president wishes.

The importance of rules

I don’t want to suggest that public corporate governance is perfect.

Too often, the interests of private investors are placed above the many other stakeholders whose communities and lives are affected by corporate decisions. Safeguards are too often evaded.

But my point is the rules are there, and they do often work.

And much is at stake. When the governance of a corporation goes off the rails, millions, perhaps even billions of dollars can be lost, jobs destroyed, retirement funds wiped out. When it concerns the governance of a country, particularly one with a nuclear arsenal, then the dangers are real and present.

By Bert Spector, Associate Professor of International Business and Strategy at the D’Amore-McKim School of Business, Northeastern University