'A Game of Survival': Trump Is Reportedly Cracking in Private as His Political and Legal Perils Grow 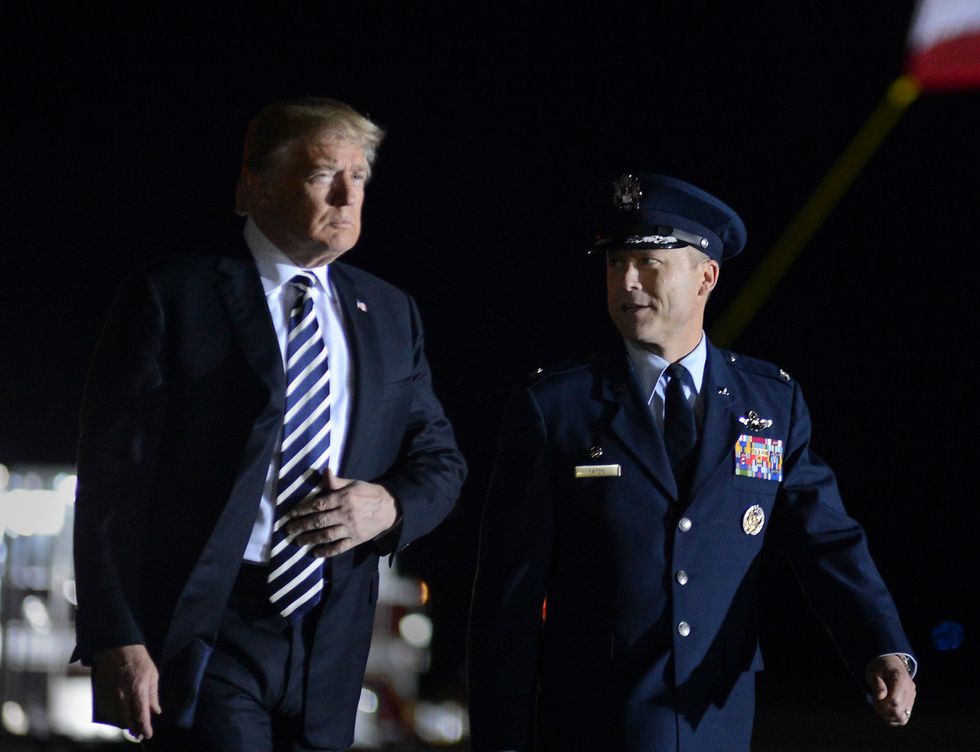 President of the United States Donald J. Trump walks with Col. Casey D. Eaton, 89th Airlift Wing commander at Joint Base Andrews, Md., May 10, 2018, as they prepare to greet three Americans who were freed from North Korea on May 9. An 89th AW C-40 high-priority personnel transport aircraft carried Kim Dong-chul, Tony Kim and Kim Hak-song from North Korea to Anchorage, Alaska, where the plane refueled before arriving at JB Andrews. The 89th AW executes special missions such as these on a routine basis while enabling national interests through global transportation for America's senior leaders. (U.S. Air Force photo by Staff Sgt. Kenny Holston)
Matthew Chapman
and
AlterNet
September 19, 2018

On Tuesday, President Donald Trump gave an unhinged interview in his usual form, calling the FBI a "cancer," attacking Attorney General Jeff Sessions, and bizarrely saying that he should have fired James Comey before he was even elected.

But according to a new report in the Washington Post, these comments are comming from a place of fear.

The president, as well as family members and longtime loyalists, fret about who in the administration they can trust, people close to them said, rattled by a pair of devastating, unauthorized insider accounts this month from inside the White House. A senior administration official penned an anonymous column in the New York Times describing a “resistance” within to guard against the president’s impulses, while Bob Woodward’s new book, “Fear,” offers an alarming portrait of a president seemingly unfit for the office.

“Everybody in the White House now has to look around and ask, ‘Who’s taping? Who’s leaking? And who’s on their way out the door?’ It’s becoming a game of survival,” said a Republican strategist who works in close coordination with the White House, who spoke on the condition of anonymity to speak candidly.

This negative atmosphere reflects the deteriorating situation for Trump, who is facing more opposition in his presidency than ever before.

Even before the release of Woodward's book, Trump had reason to be paranoid. The Russia investigation is set to lock up members of his campaign, and could go even deeper. Former members of his administation, like Omarosa Manigault Newman, have dropped embarrassing leaks from the White House. Meanwhile, his party's prospects of holding onto control of the House remain grim, raising the possibility that next year, congressional committees with the power to investigate him could be in the hands of his political opponents.

On top of everything, the Senate hearings for Supreme Court nominee Brett Kavanaugh have become mired in toxic scandal, and Trump, by some accounts, views the proceedings as a referendum on whether he can still rally the GOP to do his will.

It is a miserable time for Trump. All of the poor and reckless decisions he has made on the road to, and in, office are coming back to haunt him.