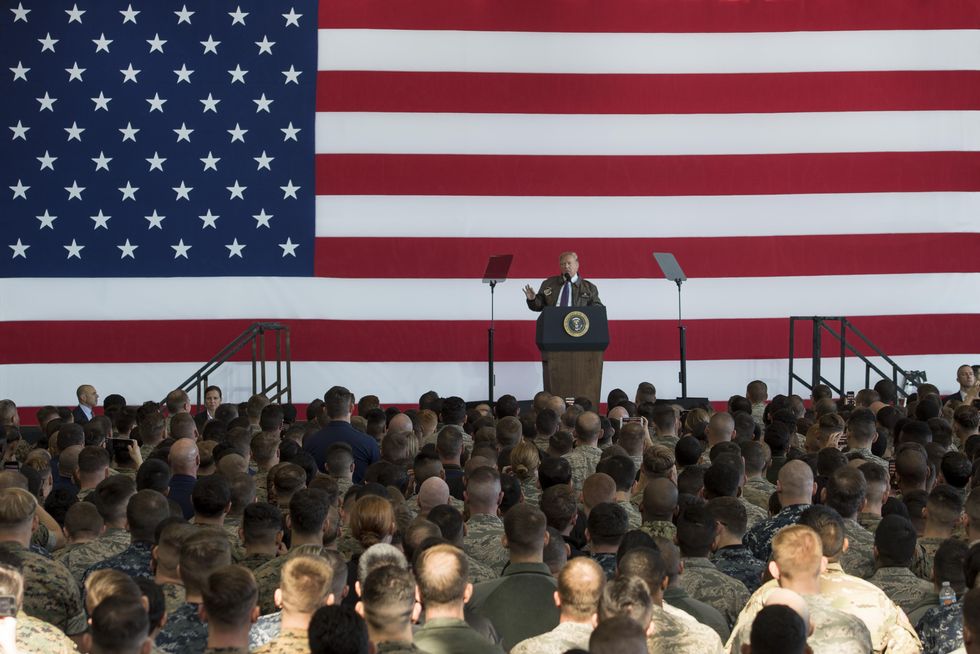 War is hell. We've learned that over and over from the hundreds of thousands of deaths, uncountable maimings, torturings and other horrors our soldiers have experienced in the multitude of wars in this century alone.

America is now militarily involved in 76 countries! Yet, the war machine -- including a massive army of profiteering corporate contractors and the politicians they buy -- keeps demanding more: more troops, more money, more profits ... more war. Finally, We the People (the 90-plus percent of us who're not really aware of, much less engaged in, this hell) need to awaken to another stark reality: War is stupid.

The place to start admitting it and begin to end the stupidity is 8,000 miles away from us. "It is time for this war in Afghanistan to end." That's not me talking, it's General John Nicholson, who has served four tours in that war and recently completed 31 months as the commander of our forces there. After 17 years (the longest war in U.S. history), after 2,202 Americans killed there, after trillions of dollars frittered away, after multiple policy shifts that falsely promised "victory," our own military has widely conceded that we can't win. In fact, the war is such a low priority that President Donald Trump, the commander in chief, has never even bothered to meet with Nicholson. Yet, we have 14,000 troops stuck there, are pouring more blood and treasure into the lost cause every day, continue to prop up the inept and wholly corrupt Afghan government and are destroying our nation's credibility as a global force for peace and democratic values. Why?

Another former commander of U.S. forces answered with depressing candor: "We continue to fight simply because we are there."

Did I mention that war is stupid? If we're only there because we're "there," it's way past time to leave.

And if you think our government's policy to stay in Afghanistan is out-of-this-world cuckoo, consider the spaciness being proposed by the cosmonauts on Spaceship Trump.

Spending nearly $700 billion a year on maintaining the five branches of the U.S. war machine (not counting the costs of actually fighting all the wars they get into) is not enough, they now tell us. So prepare to soar militarily and budgetarily into a boundless war theater where none have gone before: outer space!

It seems that Captain Trump himself woke up one morning in June and abruptly announced that he was bored with the fusty old Army, Air Force, etc., so he wanted a shiny new sixth military branch to play with (space music sound effects) -- a "Space Force" to carry America's war-making power to a cosmic level. His loyal lieutenant, Mike "Yes-Man" Pence promptly saluted, calling Trump's whim "an idea whose time has come." Even though America's military leaders rolled their eyes at this folly, they've since snapped to attention and are preparing to launch Cap'n Trump's grandiose space dreams.

In a melodramatic speech, Pence declared that the new Space Command will "seek peace, in space as on Earth." Hmmm ... That's not very comforting, is it? However, he says he's thrilled that Trump's Space Force will have a four-star general, its own bureaucratic chain of command with a multibillion-dollar budget, a separate division to funnel money to corporate war contractors, and its own snappy uniforms. Won't all that look great if Trump ever gets that big showy military parade he's demanding.

Pence gushed that this extraplanetary extravagance will attract "America's best and bravest" to serve as "warfighters." Of course, privileged families like Captain Trump's won't have to participate in any of the space wars he's dreaming up for others to fight in.