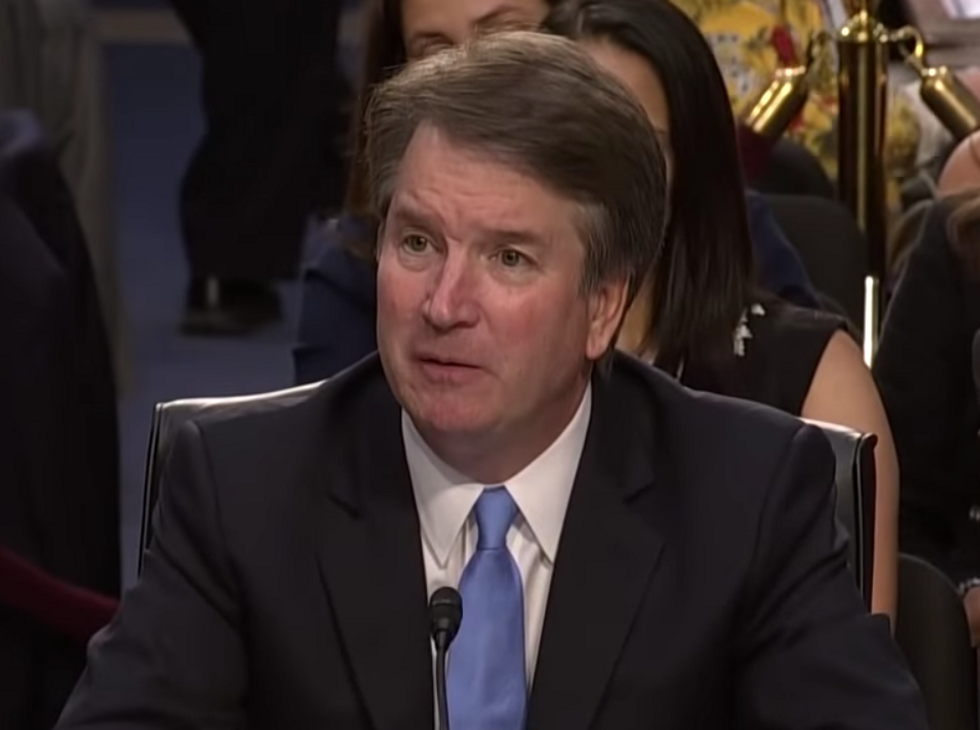 From the moment the world learned that there were serious accusations of sexual misconduct against Supreme Court nominee Brett Kavanaugh, countless conservatives have done their best to mock, downplay, and disregard the very serious allegations.

Now that the accuser, Christine Blasey Ford, has come forward, they haven't slowed their attempt to discredit, demean and dismiss her at all. If anything, their attacks have only ramped up as the allegations became more serious and credible.

Fox News commentator Stephen Miller (no relation to the White House staffer) offered up some of the worst takes in the aftermath of Ford's revelations. Ford said that Kavanaugh and a friend of his, Mark Judge, held her down in a bedroom at a party in high school while Kavanaugh groped her and tried to remove her clothes. She says they covered her mouth, turned up music to muffle her screams, and says she feared they'd inadvertently kill her.

In this way, he doesn't even accept Kavanaugh's denial that the incident ever took place. He seems to believe that it happened, but he dismisses any claim that it was wrong — despite the fact that Ford says she feared for her life, says it was against her will, and experienced decades of trauma as a result.

David French, a columnist for National Review, conversely, agrees that the charges against Kavanaugh are serious. But from the beginning, he's been clear that there's little reason to believe a woman who brings charges against a well-respected conservative judge.

Before Ford had come forward, he said, "So far, the claims against Kavanaugh are _still_ a dreadful dirty trick."

After she went on the record with the compelling details of her allegations, his mind didn't change. He said it's more likely that he claims are false than that they're true, based on little more than minor (and easily explained) discrepancies between her account now and notes taken by her therapist about the incident in 2012. And, perhaps, the fact that she's a Democrat.

Ed Whelan, a conservative legal writer, has been a vociferous defender of Kavanaugh from the beginning of his nomination. Without providing any justification aside from his faith in Kavanaugh, he has declared that Ford is not telling the truth about her accusations. He's openly speculated that she might have had false memories about the event, without acknowledging that it's at least as likely, if not more, that Kavanaugh could have blacked out himself during a drunken assault. He also fails to acknowledge one of the major lessons of the #MeToo movement — that many men who seem to be upstanding citizens are also guilty of terrible offenses.

Erick Erickson, a conservative writer at The Resurgent, has been one of the most prolific disseminators of vicious talking points against Ford. He has denied that there should even be hearings about the accusation and has baselessly said that Ford is not credible.

He writes: "While I suspect the accuser will bring forward some friends who claim she told them at the time, because that is just how convenient this story is, thus far none have come forward."

Ford has presented a therapist's notes from 2012 about the assault and her husband's corroborating testimony, but this is not enough for Erickson. But, apparently, based on this quote, nothing could be enough for him. If her friend's come out to confirm the report, that's just a little too "convenient." If they don't, well then how come? Isn't that just a little too suspicious?

He also repeatedly calls her a "Bernie Sanders supporter," as if that damages her credibility.

Another favorite line of attack from many of these conservatives: Going after Sen. Dianne Feinstein (D-CA), who kept Ford's letter quiet when she wanted to remain anonymous. They call the late-game revelation of the accusations a dirty trick, rather than taking seriously the fact that coming forward with these accusations is incredibly risky and emotionally and socially costly. This put both Feinstein and Ford in a very fraught position.

Why is it so difficult to come forward? Because accusers know they will be attacked — and these conservatives have proven that to be true.