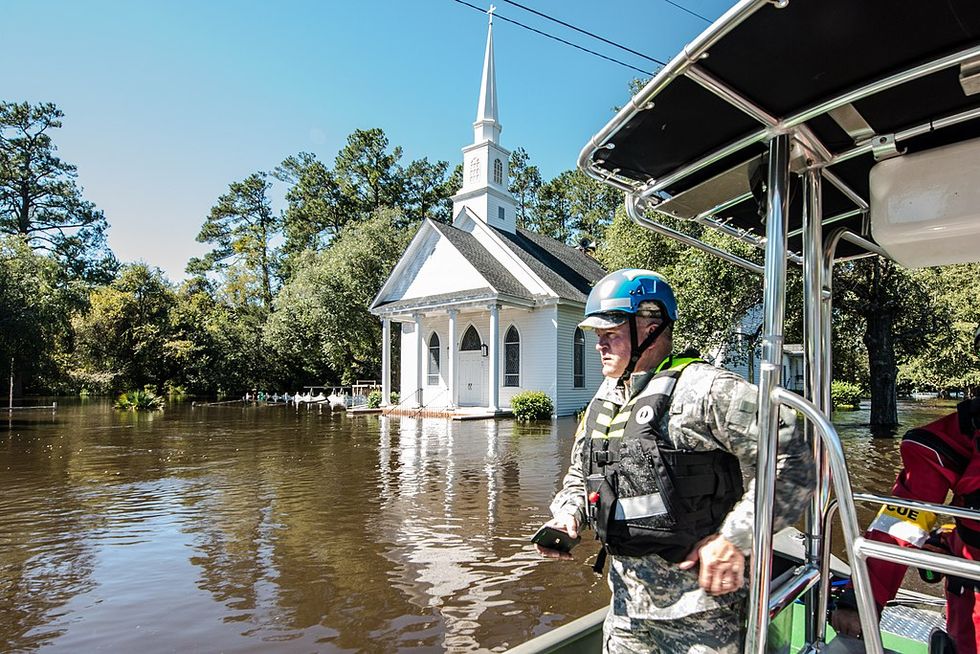 No matter how devastating or catastrophic a hurricane or typhoon is predicted to be, there will inevitably be some people who refuse to evacuate and insist on riding the storm out—and with Hurricane Florence getting ready to assault the Carolinas, some residents of coastal areas in North and South Carolina are doing exactly that. But riding out Hurricane Florence in areas that are being evacuated is not a good idea, especially in light of all the devastation brought about by Hurricane Katrina in 2005 and Hurricane Harvey and Hurricane Maria in 2017 (Puerto Rico’s government recently raised the island’s Maria-related death toll to 2,975 people).

According to meteorologists, Florence could be quite deadly—and with climate change making hurricanes more common and more catastrophic, there are going to be a lot more storms like Florence.

Here are five frightening things about Hurricane Florence that meteorologists are reporting.

The term “storm surge” refers to a tsunami-ish rise in coastal waters during a cyclone, which is called a hurricane in the Atlantic or a typhoon in the Pacific. Exactly how bad the storm surge will be with Hurricane Florence remains to be seen, but meteorologists for NBC News are predicting that it could be up to 13 feet—and that is higher than Hurricane Maria, which brought a storm surge of around nine feet to parts of Puerto Rico. And when a storm surge reaches 13 feet and results in severe coastal flooding, people near the Atlantic Ocean can drown very quickly. NBC News meteorologist Al Roker described Florence’s potential storm surge as “the most dangerous part of the storm.”

A fast-moving hurricane can be deadly, but a hurricane that stalls—meaning that it spends more time pounding a particular area with strong winds and heavy rain—can be even worse. When Hurricane Floyd attacked North Carolina in 1999, it didn’t stall; Floyd was a fast-moving storm. But even so, Floyd dumped two feet of rain on North Carolina. And because Hurricane Florence has the potential to stall, it could inflict a lot more damage and cause more severe flooding in North Carolina than Floyd did 19 years ago.

Hurricanes and typhoons not only bring severe coastal flooding via storm surge—they create terrible inland flooding as well. With Florence, the potential for deaths by drowning comes from the storm surge as well as incredibly heavy rainfall. And according to meteorologists, the rainfall in parts of North Carolina could exceed three feet with Florence. That’s comparable to Hurricane Harvey, which according to some weather stations, dropped more than four feet of rain on areas of southeastern Texas.

5. Florence’s Damage Could Be Widespread

Climate change will increase the number of both hurricanes and tornados. While tornados have higher wind speeds and can easily tear a building to pieces, hurricanes cover much wider areas. In a 2012 article for Philadelphia Magazine, journalist Joel Mathis (a Kansas native who moved to Philadelphia) explained why hurricanes “terrified” him so much and why he would “rather take my chance with a tornado.” Mathis wrote, “Here’s the thing about tornadoes: they’re here, and then they’re gone. Yes, they can do a tremendous amount of damage….But they come and they go in a matter of minutes.”

Hurricanes, on the other hand, stick around much longer. The damage is much more widespread—and while Florence’s main targets appear to be the Carolinas, the storm could bring flooding to parts of Georgia and Virginia as well. Virginia, in fact, has issued mandatory evacuations for coastal areas of the state.