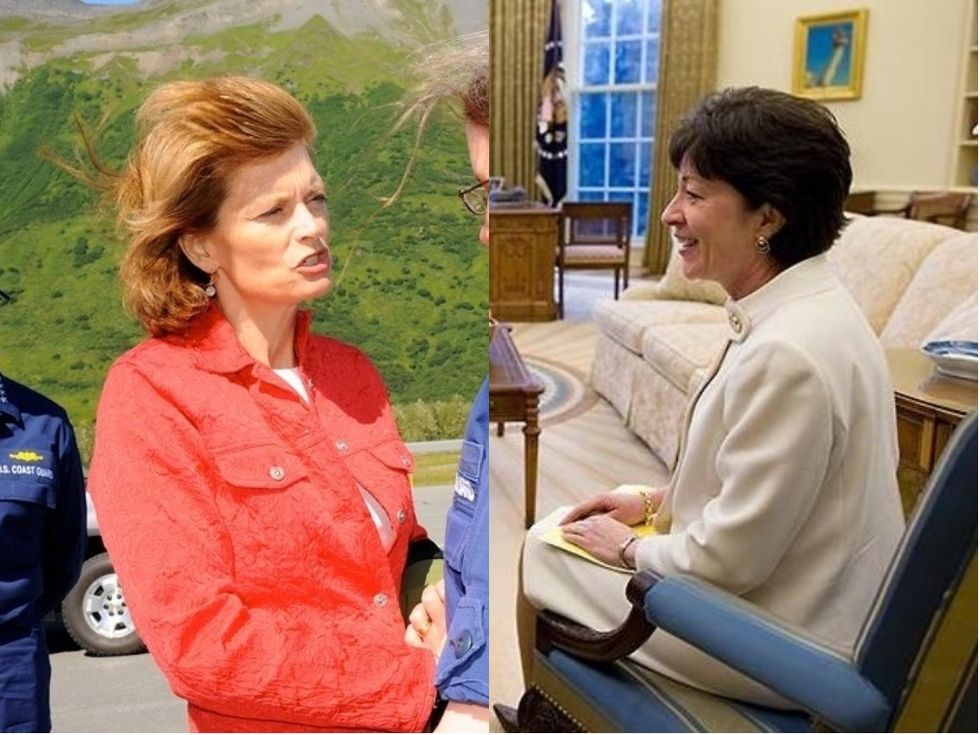 If any two Republican senators sink the nomination of Judge Brett Kavanaugh to the U.S. Supreme Court, it will be Maine’s Susan Collins and Lisa Murkowski—who are under enormous pressure from President Donald Trump and Senate Majority Leader Mitch McConnell on one hand and opponents of Kavanaugh’s nomination on the other. And with 51-year-old psychology professor Christine Blasey Ford alleging that Kavanaugh attempted to sexually assault her back in 1982, the pressure on Collins and Murkowski has become even more intense.

Although Collins and Murkowski are often described as “moderates,” both of them have very conservative voting records. Nonetheless, they aren’t as far to the right as other Republicans in the Senate; for one thing, both of them are pro-choice on the abortion issue. And they famously bucked their party when, in 2017, they voted against a Republican bill that would have repealed the Affordable Care Act of 2010, a.k.a. Obamacare.

Neither Collins nor Murkowski have stated whether or not they will vote for Kavanaugh’s confirmation, trying to give the impression that they are weighing the decision carefully. Both of them, however, voted to confirm Justice Neil Gorsuch, Trump’s first Supreme Court nominee—and Collins, even after Ford’s allegation, is still on the fence. In a letter to Republican Sen. Chuck Grassley (chairman of the Senate Judiciary Committee), Collins recommended that if Ford and Kavanaugh testified in a Senate hearing on Monday, September 24, both of them should be questioned by attorneys—Ford’s attorneys as well as Kavanaugh’s.

But it looks like Ford will not be testifying on September 24. Attorneys for Ford (a professor at Palo Alto University in Northern California) have stated that she will not testify before the Senate Judiciary Committee until there has been an FBI investigation of her allegations. Lisa Banks, one of Ford’s attorneys, told CNN’s Anderson Cooper, “Asking her to come forward in four or five days and sit before the Judiciary Committee on national TV is not a fair process.”

Giving Kavanaugh a thorough vetting—even after an accusation of attempted rape—is clearly of no concern to Grassley, Sen. Lindsey Graham, Sen. Orrin Hatch and other avowed Kavanaugh supporters in the Senate. Grassley insists that a Senate hearing on Ford’s allegations, minus an FBI investigation, is adequate. And the Iowa Republican, determined to see Kavanaugh’s nomination rammed through the Senate as quickly as possible, said in a September 19 statement, “If we don’t hear from both sides on Monday, let’s vote.”

Utah Sen. Orrin Hatch has no interest in waiting for an FBI investigation. And Graham, on September 19, officially stated, “Requiring an FBI investigation of a 36-year-old allegation, without specific references to time or location, before Professor Ford will appear before the Judiciary Committee is not about finding the truth, but delaying the process until after the midterm elections. It is imperative the Judiciary Committee move forward on the Kavanaugh nomination and a committee vote be taken as soon as possible.”

Of course, “imperative” is not a word that Graham used in 2016 when President Barack Obama nominated Judge Merrick Garland for the Supreme Court. McConnell, Graham and others were more than happy to wait a year to fill Justice Antonin Scalia’s seat, but with Kavanaugh, the 2016 “McConnell rule” (no Supreme Court votes before an election) doesn’t apply—even with Kavanaugh being accused of attempted rape.

If hardcore Kavanaugh supporters in the Senate do force a confirmation vote next week, the question is: how will Collins and Murkowski vote? Some commentators have asserted that Collins and Murkowski will vote against Kavanaugh rather than risk being viewed as unsympathetic to an alleged victim of attempted rape. MSNBC’s Rachel Maddow has asserted that in light of Ford’s accusation, Kavanaugh’s nomination is “hurtling toward the sun.”

Collins and Murkowski were under immense pressure from Kavanaugh’s opponents even before Ford’s allegation became public. In Maine, for example, the pressure for Collins to vote against Kavanaugh is so intense that activist Ady Barkan, along with the groups Mainers for Accountable Leadership and the Maine People’s Alliance, have been crowdfunding Collins’ 2020 opponent (whoever that might turn out to be). As of September 19, the Maine residents had raised $1,402,715—which is 94% of their $1.5 million goal—and earmarked the funds for Maine’s hypothetical opponent should she vote for Kavanaugh and seek reelection two years from now.

But the pressure from pro-Kavanaugh Republicans is intense as well for Collins and Murkowski—so intense that it might outweigh the pressure they are getting from his opponents. And despite the severity of Ford’s accusation, there is a very strong possibility that Collins and Murkowski will throw integrity to the wind, cave into GOP pressure and vote to confirm Trump’s second nominee—allegations and all.