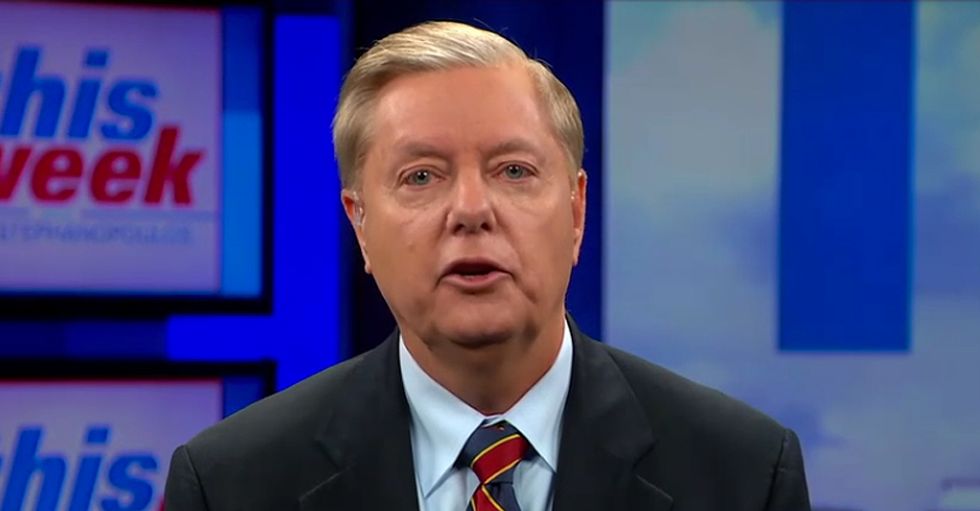 Lindsey Graham has dedicated himself to finding who he believes are the real villains uncovered during the Brett Kavanaugh hearings -- the Democrats.

On ABC news' "This Week," Graham continued his defiant response presented during the hearing, vowing to "do a wholesale, full scale investigation of what I think was a despicable process to deter it from happening again."

Said Graham, "The FBI will do a supplemental background investigation, then I'm going to call for an investigation of what happened in this committee. Who betrayed Dr. Ford's trust? Who in Feinstein's office recommended Katz as a lawyer? Why did Ms. Ford not know that the committee was willing to go to California?"

Graham has also suggested that there is no need for the FBI to do any sort of investigation into Brett Kavanaugh, disputing host George Stephanopoulos on the relevancy of looking into witnesses who may contradict his testimony.

"He's had six FBI background checks. He's been on the political stage for 26 years. He's not a stumbling, bumbling drunk," said Graham. "I don't believe that he could have accomplished what he's accomplished to have been a serial rapist in high school and stop it for the rest of your life"

Graham contends that the allegations against Kavanaugh are political in nature.

"All I can tell you is it came from somebody with a political motive. There were three people who had the letter, people in Feinstein's office, the congresswoman from California, and Ms. Katz and the legal team," said Graham. "No friend would do this to Dr. Ford. I believe her when she said she wanted to remain anonymous."