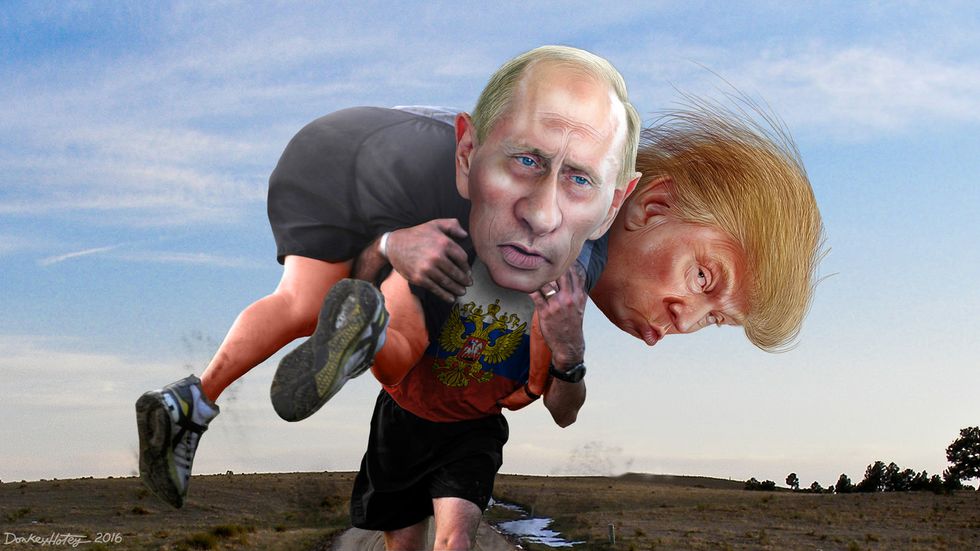 The Kremlin is rooting for Republicans to keep their congressional majorities, according to a Russian media analyst -- and its state TV hosts are confident they'll win.

President Donald Trump hasn't done much to counter foreign efforts to influence the midterm elections, and has even suggested the Kremlin will work to benefit Democrats, but Russia's state TV paints a different picture, wrote journalist Julia Davis for The Daily Beast.

“Global empires like the United States are destroyed from within," said filmmaker Karen Shakhnazarov on Russia's "60 Minutes." "The U.S. is deteriorating. They won’t find other fighters like (Sen. John) McCain. There won’t be any others like him. This process is irreversible.”

Russia hopes to help Trump by promoting his economic successes and create joint business opportunities, and by cultivating relationships with Republican elected officials -- some of whom have traveled this summer to Moscow.

"Naturally, Trump’s team — if they aren’t suicidal — will find arguments in support of the president," said Konstantin Zatulin, a leading figure in Putin’s United Russia party. "Those who don’t, won’t be on his team — or maybe they won’t be in Congress."

Olga Skabeeva, host of "60 Minutes," and Russian government officials have openly bragged about using active measures to promote their agenda through U.S. politics -- which they believe will further compromise Trump.

"Help him, direct him, support him -- and then you'll say he isn't ours," Skabeeva said.

Russian media reports that sanctions proposed by Trump will never be enforced and were just for show before the elections, and they say the president and his Russian counterpart quietly agreed in Helsinki to establish a business council to "unite" U.S. and Russian business interests.

“We can seriously benefit from these deals, there’s potential profit at stake," said Dmitry Abzalov, director of the Center for Strategic Communications in Moscow. "We shouldn’t let Trump down right now, our main goal right now is to help him with correct arguments. He will follow through with an internal agenda and economy.”

The Kremlin's overarching goal is to see the U.S. give up its role as the world's dominant superpower and retreat to domestic affairs and global commerce, according to Davis.

“With Americans, it’s all very clear,” said Russian state TV host Evgeny Popov. “In Iowa or someplace in Montana, they’re more concerned with the price of corn or beef than Crimea.”

However, Russia plans to pursue an even more aggressive foreign policy.

"Turns out, the first President of Russia was threatening [Bill] Clinton that the Communists will come back, take the Crimea and Alaska," said Skabeeva, the "60 Minutes" host. "We already took the Crimea, albeit without the Communists. Now it's Alaska's turn."