Outraged by ICE's Treatment of Children? Here's How to Close Your Wallet to the Companies That Profit from It 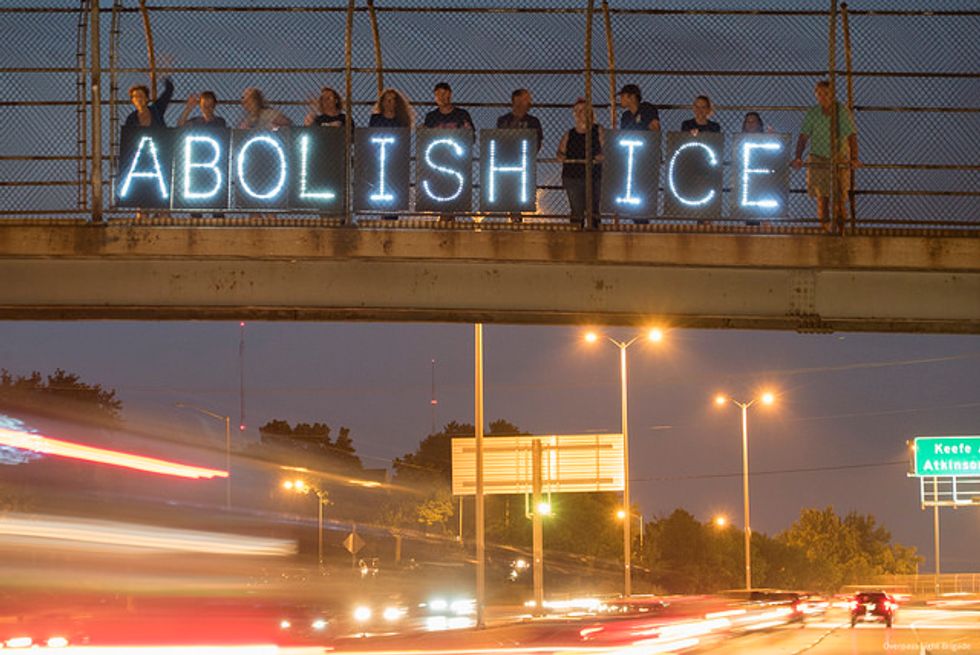 Are you sick of our government separating children from immigrant parents and putting them in cages?

Do you think ICE should be abolished?

You’re not alone. Thousands of people across the country are coming together to abolish ICE, from closing detention facilities to embarrassing the bankers that do business with the agency, activists coast-to-coast are doing what they can to end the sickening practice of putting immigrant kids in cages.

Of course, American kids are put in cages too.

And not everyone is motivated to risk arrest to stop a government agency.

So what’s an American to do?

The answer is simple: Close your wallet.

At least, close it to the companies that are profiting from the sick and twisted game of incarcerating children, subjecting them to psychotropic drugs, and sending them into slavery since at least 2014—long before Trump was elected.

Now that more people are aware of what ICE is doing, how does an average American know what companies are profiting from ICE’s madness?

Start here, by reading the new article by David Dayen, Below the Surface of ICE: The Corporations Profiting From Immigrant Detention (Disclosure: Both Dayen and I are Fellows at the Goodman Institute).

The two big companies to divest from are GeoGroup and CoreCivic. As of 2016, Vanguard and Fidelity, among others, both had funds that invest in one or both. Keep in mind CoreCivic was once Corrections Corporation of America, before changing their name.

Take the time to find out if one or more of your investment funds are invested in one of these two, and then, if you’re so moved and disgusted by their practices, divest.

Or, you could do what other activists have done: Target the banks investing in them. Writes Dayen:

“JPMorgan Chase holds no direct contract with ICE and doesn’t handle financial services at ICE facilities, but it does enable and profit from the private-prison duopoly of Geo Group and CoreCivic ... Since Donald Trump took office, JPMorgan has increased its stockholdings in Geo Group and CoreCivic 15,600 percent. The bank has also provided at least $167.5 million in debt financing to the two companies, which rely on borrowed money.”

You can close your bank accounts and credit cards at these banks, and move your money to a local credit union.

For those who might not have funds or accounts to divest from, there are dozens of other companies profiting from ICE. In fact, “The vast majority of the immigration machine is left to private-sector contractors,” says Dayen. He continues:

Amazon’s facial recognition technology is used by ICE. Western Union is another ICE profiteer, and so is Aramark. Thankfully there are many other ways to buy products besides Amazon (and how many more reasons do you need to stop buying from them?). There are multiple ways to send money, cash checks, or pay utility bills, even for the very poor, that don’t involve Western Union.

Food services giant Aramark might be harder to escape because they are very good at dominating isolated places like hospitals and college campuses. But you can still ask your hospital or university to end their Aramark contract, or organize for other solutions.

In other words, there “is a wide variety of ways” to get active and register your discontent with ICE, Dayen tells us. “At the minimal level, figuring out what companies are supporting the immigration policies and not patronizing these companies.”

Dayen says these tactics can be effective, because “these are businesses that need your business to survive.”

This level of absolute corporate involvement “is only possible because of privatization,” he adds, which creates the opportunity to target these companies with consumer activism. “It’s more accessible than going after ICE as an organization. Unlike Trump, Wells Fargo might listen. Their reputation is [already] reeling.”

Dayen also says workers can play an important role in shutting down ICE contracts and collaborations:

“Silicon Valley … scored a major victory at Google in June when the company cancelled artificial intelligence work for the Defense Department. ‘Workers were learning how to wield power within their companies,’ says Yana Calou, an organizer with Coworker.org, which has been assisting tech employees in these fights.

“Weeks after the Google victory, workers circulated open letters at Amazon, Microsoft and Salesforce, asking CEOs to cancel their immigration contracts… ‘Tech infrastructure is absolutely integral to all of [ICE’s] operations,’ says Calou. ‘If they were really concerned about reuniting families, they would be building tech for the families.’”

Media could also play a role: Thomson Reuters—known for its reputable wire service—supplies ICE with data. (Disclosure: I have covered breaking news for Reuters as a stringer.)

Whatever actions you decide to take to help end the madness of profiting off doing unconscionable harm to children, it’s important to keep going, whether you’re taking action working at a tech firm or working with your fellow suburban moms. It’s easy to chase the next bone thrown by Trump, but staying on an issue, maximizing and ramping up pressure can pay off.

And you might as well hit ’em where they really don’t want you to: By withholding your money from them until they end their ICE contracts and collaborations. Be sure to shoot the corporations an email or @ them, and let them know how you don’t support their involvement in hurting children. #Boycott[InsertCompanyNameHere]