'This Is Not a Drill': Democrats Told to 'Go for the Jugular' to Stop Kavanaugh As Hearings Begins 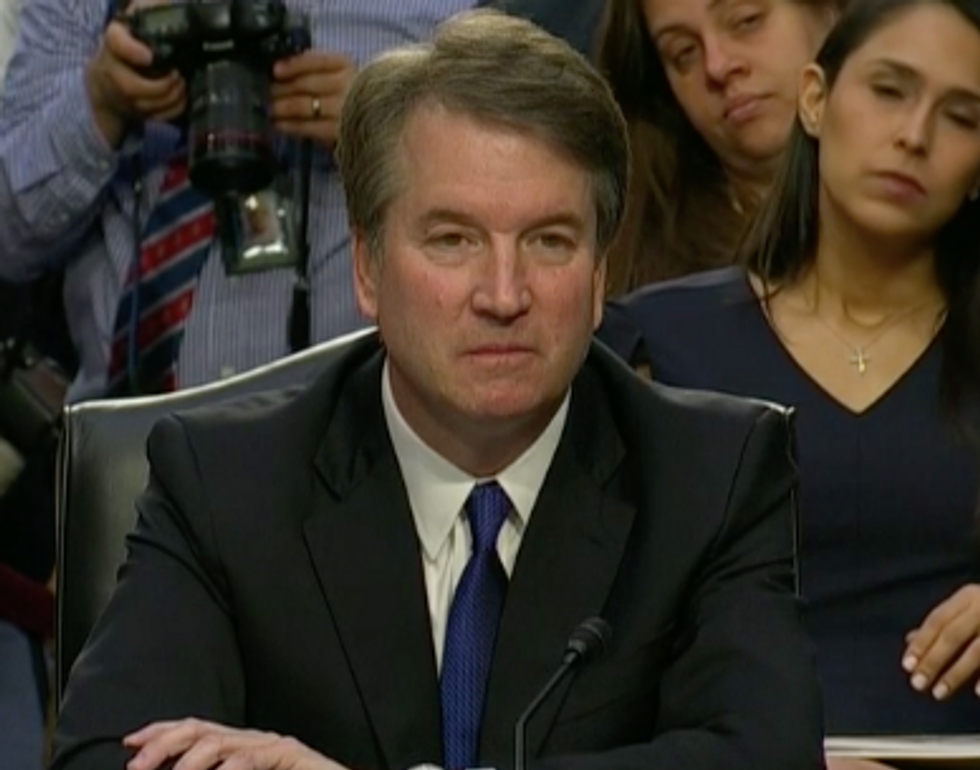 As President Donald Trump's right-wing Supreme Court pick Brett Kavanaugh appeared before the Senate Judiciary Committee for his first confirmation hearing Tuesday morning, progressive lawmakers and advocacy groups are ramping up what has been described as the "biggest campaign against a Supreme Court nominee in U.S. history" to stop a judge who poses a dire threat to the planet, workers, and the reproductive rights of women.

"This is not a drill," Sen. Elizabeth Warren (D-Mass.) declared on Twitter Monday night. "The Supreme Court, and the future of our country—are both on the line. If we're going to stop Kavanaugh, we need you to speak out now."

In addition to urging Americans to blow up the phone lines of Democratic senators who haven't committed to opposing Kavanaugh, activists also gathered outside the Senate in anticipation of Kavanaugh's confirmation hearing.

Organized by MoveOn.org, NARAL, and other progressive organizations, protests against the most unpopular Supreme Court nominee in decades will continue Tuesday evening and throughout the rest of the week.

"The GOP is one vote away from swaying the balance of the Supreme Court and achieving their goal of gutting Roe v. Wade and ending critical healthcare protections. Brett Kavanaugh is just the guy for the job," progressive groups wrote on Facebook. "Despite what the Trump administration would have us believe, this country does not want to turn back the clock on our basic freedoms. We're going to make sure our senators hear us... We don't want someone determined to rollback our rights on the bench of our highest court! It's time to get loud!"

The Ladies of Justice are waiting to get into the Senate confirmation hearing to #StopKavanaugh because we need… https://t.co/xyePqeoOSm
— CODEPINK (@CODEPINK) 1536063520.0

Kavanaugh's first appearance before the Senate Judiciary Committee will come just hours after a lawyer for former President George W. Bush dumped 42,000 pages of Kavanaugh's record to the committee, prompting outrage from Democrats who said they would not have time to review the documents in time for Tuesday's hearing.

As Common Dreams reported, Trump has also asserted executive privilege to suppress 100,000 pages of documents from Kavanaugh's tenure as a lawyer in the Bush administration.

While Senate Majority Leader Chuck Schumer (D-N.Y.) has called such secrecy an attempted "cover-up," Schumer has come under fire from progressive groups for failing to pressure so-called moderate members of his caucus to vote against Kavanaugh.

Pressuring Schumer to "do his job"—instead of helping his Republican counterparts ram through right-wing judges, as he did just last week—CREDO Action is planning to circulate a mobile billboard around Capitol Hill throughout the week. CREDO said in a statement that the billboard will drive repeatedly around the Hart Senate Office Building, the U.S. Capitol Building, and the U.S. Supreme Court until late Thursday afternoon.

Here is the billboard design:

Because late Sen. John McCain's (R-Ariz.) replacement is expected to be appointed before the full Senate votes on Kavanaugh's nomination as soon as the end of the month, Democrats will have to fully unite against Kavanaugh and peel off two Republican senators in order to block the right-wing judge's nomination.

As such, advocacy groups have been relentlessly pressuring Republican Sens. Susan Collins (Maine) and Lisa Murkowski (Alaska) to vote against Kavanaugh.

"If Kavanaugh is confirmed, he will rule for giant corporations and powerful interests on critical cases affecting the lives of Americans for a generation," Sen. Warren concluded in an email to supporters Monday night. "Last year, we convinced three of my Republican colleagues in the Senate to vote to stop Trumpcare. I believe that if enough of us speak out, we can convince Republican senators to do what's right once again and vote against Kavanaugh."

Meanwhile, progressive law scholars called on Democrats not to play games and be tough during the hearings.

"The only hope the country has is that Democrats will treat Kavanaugh like a hostile witness on the witness stand under cross-examination, throw him off script and break him down," said Francis Boyle, a law professor at the University of Illinois. "You do not need a gentleman or gentlewoman to deal with Kavanaugh. You need a district attorney. Some Democrats are going to have to go for the jugular."