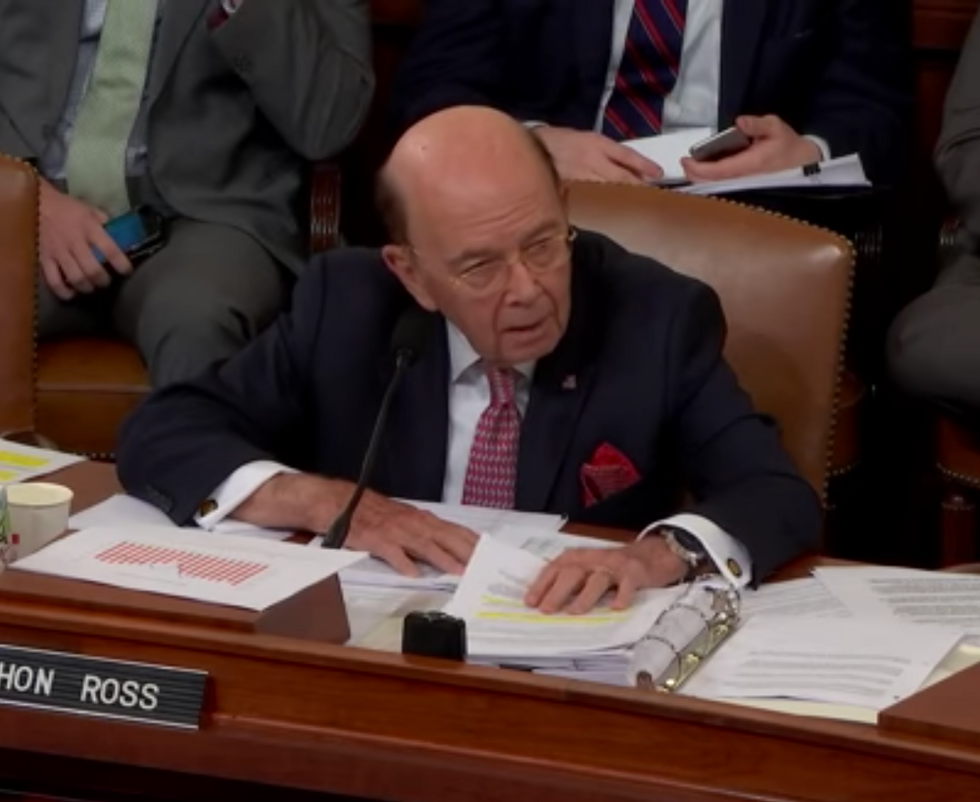 When President Donald Trump's administration announced it would add a question about citizenship to the 2020 census, many observers argued that this appeared to be a cynical ploy to intimidate immigrants and thus under-count the population of regions with high levels of immigration.

The administration, most notably Secretary of Commerce Wilbur Ross in testimony to Congress, has fired back at these critiques, saying that the citizenship question arose because of legitimate concerns raised by the Justice Department. However, new emails suggest that this was a flat-out lie.

“Department of Justice, as you know, initiated the request for inclusion of the citizenship question," Ross told the House Ways and Means Committee on March 22, 2018. "Because it is from the Department of Justice, we are taking it very seriously, and we will issue a fulsome documentation of whatever conclusion we finally come to.”

Previous reporting from the Washington Post on emails produced by a lawsuit against the immigration cast doubt on these claims. It is clear, for instance, that Ross has long desired to include a citizenship question before the Justice Department issued its statement claiming a need for the question.

But a new email, produced by Daniel Jacobson, a former Obama White House lawyer, shows even more starkly how Ross manufactured the purported need for the question by reaching out to the Justice Department.

Re: Census Discussions with DoJ

I spoke several times with James McHenry by phone, and after considering the matter further James said that Justice staff did not want to raise the question given the difficulties Justice was encountering in the press at the time (the whole Comey matter). James directed me to Gene Hamilton at the Department of Homeland Security.

Gene and I had several phone calls to discuss the matter, and then Gene relayed that after discussion DHS really felt that it was best handled by the Department of Justice.

At that point the conversation ceased and I asked James Uthmeier, who had by then joined the Department of Commerce Office of General Counsel, to look into the legal issues and how Commerce could add the question to the Census itself.

This makes clear that the Justice Department didn't come to the Ross with the request for the question, as he claimed. Instead, the Commerce Department appears to have been fishing around for a reason to include the question, going first to DOJ, then to the Department of Homeland Security, and then at one point concluding Commerce could act on its own.

"The bottom of the email then says that Commerce would try to figure out some way that they could add the citizenship question themselves, without having to rely on DOJ," said Jacobson in a tweet. "But apparently they later realized that they needed DOJ for the pretext."

He added: "For those who have not been following this closely, Secretary Ross initially said -- including in sworn congressional testimony -- that DOJ initially approached him about adding the citizenship question. This email, among others, show that story was, um, not true."

The Commerce Department has previously denied that Ross misled Congress.

“Executive branch officials discussing important issues prior to formulating policy is evidence of good government, and the Secretary’s previous testimony before Congress is consistent with that fact," it said in a statement. "Recent document productions further demonstrate the Secretary’s commitment to taking a hard look at the alternatives presented to him by the Census Bureau. It shows an open, frank, and interactive dialogue between the Secretary and his staff. Nothing in the supplemental production changes the sound rationale he articulated in March, nor does it contradict his prior congressional testimony."

Despite this denial, the record speaks for itself. It's possible Ross's remarks don't reach the evidentiary requirements for an actual criminal charge of perjury or lying to Congress. But to any casual observer of the situation, it's clear that he wasn't particularly honest — and that certainly won't help in the lawsuit against the administration.