This is the Terrifying Reality of America's 'Deadly, Dangerous and Destabilizing Role' in Global Arms Supply 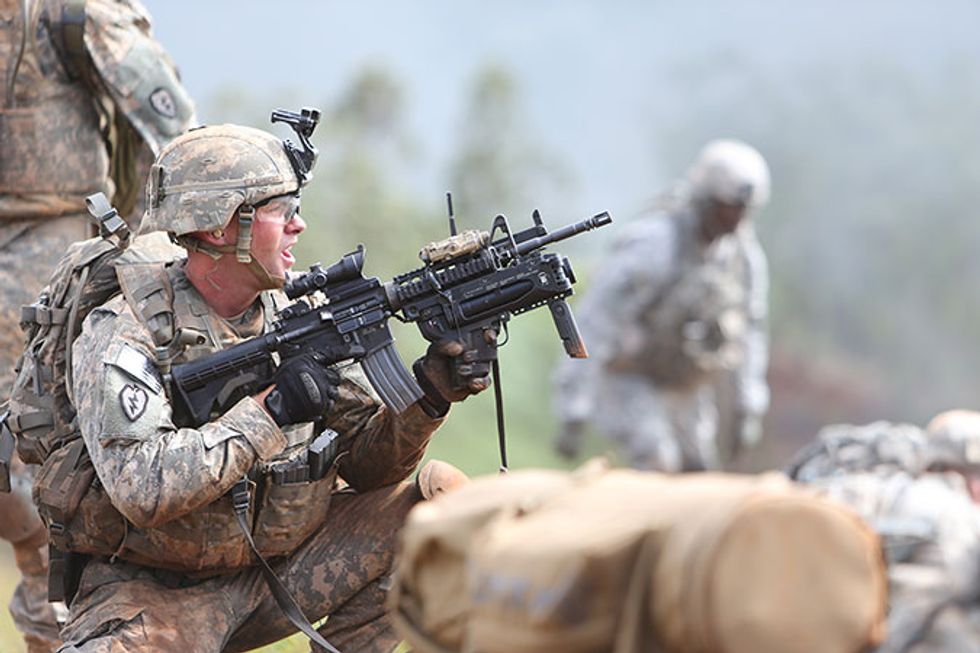 Most Americans want peace—in the world, in their country, and in their own homes and communities.

Even the most committed Trump supporter might want peace in Latin America and the Middle East—if it means “illegal” refugees stop “pouring” in to the USA.

Worse, according to a 2016 International Criminal Court report, U.S. troops allegedly committed war crimes in Afghanistan, and the U.S. military and CIA allegedly tortured at least 88 people in Poland, Romania, and other countries as well.

Perhaps it’s out of simple ignorance of a) not knowing where their money is invested and b) not knowing the U.S. companies that are manufacturing the weapons of death used by the U.S. and their frenemies around the world.

Enter CodePink’s new report, War Profiteers: The U.S. War Machine and the Arming of Repressive Regimes, a handy guide to the companies that manufacture weapons, and who they are selling them to. The report is primarily focused on Boeing, General Dynamics, Lockheed Martin, Northrop Grumman, and Raytheon—the largest military manufacturers in the U.S., and their deals with Saudi Arabia, Israel, and Egypt.

“The United States is the leading purveyor of arms sales, global war and militarism,” the report notes. “With 800 military bases in 80 countries around the world, the U.S. has a larger military budget than the next seven countries combined, as well as an arms industry that dominates the global arms trade.”

The report delves into each of the Big Five arms manufacturers and their role and involvement in the murders of civilians and children around the world. It seems what are heralded as symbols of freedom in the U.S. are viewed as symbols of absolute destruction and death to the children who bear witness to the violence inflicted upon their communities by, for example, Apache helicopters or Eagle fighters (Boeing-made combat aircraft supplied to Israel).

Of course, it doesn’t help when U.S. leaders make threats and brag about their military or economic power and their access to “the button.” For example, the ICC’s recent accusations inspired national security adviser John Bolton to threaten the ICC as “illegitimate” and that the U.S. “will respond against the ICC and its personnel.”

Current U.S. leadership actions weren’t without foreshadowing by America’s military leaders of ages past. “Those who measure security solely in terms of offensive capacity distort its meaning and mislead those who pay them heed,” President Dwight D. Eisenhower declared decades ago. “No modern nation has ever equaled the crushing offensive power attained by the German war machine in 1939,” he continued. “No modern nation was broken and smashed as was Germany six years later.”

It’s not just the arrogant language leaders use, but also the corruption of language. The report notes that, “Officially sanctioned terms like ‘defense’ and ‘security’ act as a subterfuge to diminish and camouflage the deadly, dangerous and destabilizing role that the United States is playing in the world.”

The cost of that coopting and corruption of language and perversion of justice and humanity resonates deeply throughout the world, on an emotional, economic, and even spiritual level. Even Eisenhower, the report also notes, said, “The total influence—economic, political, even spiritual—is felt in every city, every State House, every office of the Federal government. Yet we must not fail to comprehend its grave implications. Our toil, resources, and livelihood are all involved; so is the very structure of our society.”

So why is it, then, that so many Americans continue to work for the companies profiting from heinous wars? It probably isn’t Raytheon’s corny “Forget Silicon Valley: Working for a defense contractor is surprisingly cool” campaign that is attracting people to military subcontractors.

The numbers of people working in this sector—nearly half a million officially in the Big Five mentioned in the report—is troublesome considering the number of EPA employees who have left under the Trump administration: an “exodus” of over 1,600 employees who are refusing to be a part of the problem rather than the solution.

As Eisenhower said, “Disarmament, with mutual honor and confidence, is a continuing imperative. Together we must learn how to compose differences, not with arms, but with intellect and decent purpose.” That can start by moving your money—and your employment—to a different sector. But first, arm yourself with knowledge.