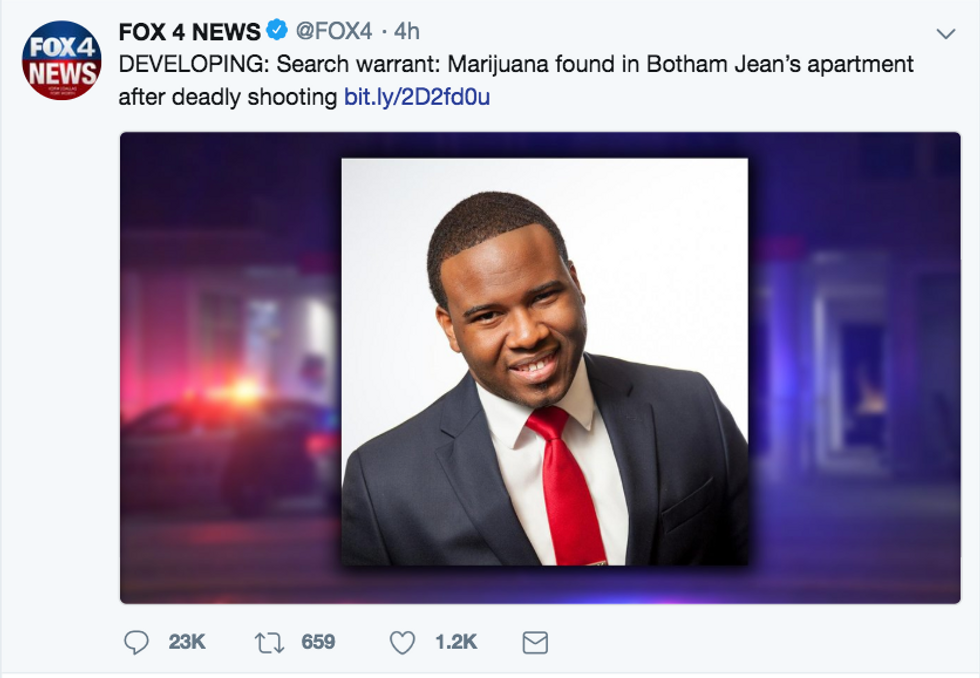 Local news station FOX4 on Thursday night added fuel to the fire of outrage at the death of Botham Jean in Dallas, Texas, after reporting that marijuana has been found in his apartment — a fact many observers argued was irrelevant to the case.

Jean, who was 26, was killed on Sept. 6 when officer Amber Rene Guyger entered his apartment and shot him. She has said that she believed she was entering her own home and believed he was an intruder, a story which many have found suspicious. She has been arrested on charges of manslaughter and released on bail.

The case drew widespread attention in the national news media, with even many conservative writers arguing that the shooting was deeply troubling and raised serious questions about police behavior and standards.

On Thursday, FOX4 posted a tweet that appeared to play directing into the worst tropes surrounding the police killings of black men like Jean: "DEVELOPING: Search warrant: Marijuana found in Botham Jean’s apartment after deadly shooting," it read.

In the context-free tweet, the station omitted that Jean's home had been entered illegally and he had been killed. Given these facts, it's not clear why it would matter whether he had marijuana — or anything else — in his home. Instead, the tweet played into the notion that black men in America are somehow always guilty, a bias that serves to excuse the abuses and atrocities of police officers and increase the likelihood that black people will be unjustly targeted.

It appeared that FOX4 later changed the headline on its website, framing the story development around the outrage about details of the search being revealed, rather than the focusing on the marijuana itself: "Lawyers 'disgusted' by release of search warrant showing marijuana found in Botham Jean's apartment."

However, the tweet remained online, despite rampant criticism from all sides.

"PAUSE. This is a real tweet that has angered so many," wrote PBS Newshour reporter Yamiche Alcindor about the tweet.

"Utterly irrelevant," said conservative Charles Cooke of the tweet. "He could have been running the world’s largest illegal marijuana dispensary and that would make no difference whatsoever to the facts, or change that he was the innocent victim here."