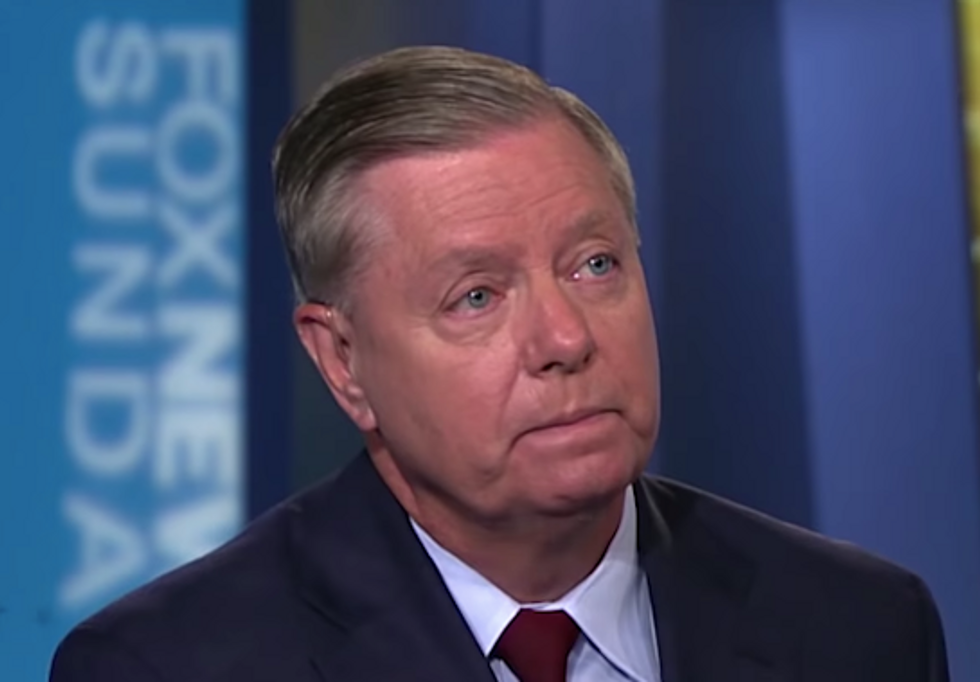 During the long week of mourning for the late Sen. John McCain, perhaps the oddest side story was the one about what in the world was going on with his erstwhile best bud, Sen. Lindsey Graham of South Carolina. At a time when one might have expected Graham to proudly take up McCain's maverick mantle, he was weakly backing the president's puerile behavior one day and then saying it "pissed him off" the next. By the weekend it was clear that rather than going his own way, after having served faithfully as "Top Gun's" Goose to McCain's Maverick, Graham has decided to transfer his filial loyalty to a new father figure: the man in the White House.

This is not entirely unexpected. Graham has been madly signaling for the past few weeks that he wants Trump's approval. Most notably, he seems to have made a deal to let Trump fire Attorney General Jeff Sessions once they get through the Supreme Court confirmation and the midterms. The man who said of Trump back in 2016, “I think he’s a kook, I think he’s crazy, I think he’s unfit for office,” has been shamelessly sucking up at various times since the inauguration, most memorably when he spent hours on the golf course persuading Trump to bring together Democrats and Republicans for a deal on the Dreamers -- only to have the president kneecap him at the last minute.

Early on it appeared that Graham was one of the legions of politicians and staffers who believed they could flatter Trump into making better decisions. Along with many other observers, I wanted to give the South Carolina senator the benefit of the doubt. But like all the others, he overestimated his skills at manipulating a narcissist. Trump will not do what he doesn't want to do, particularly if there are other people around him who are trying to get him to do what he really wants to do. In the case of immigration, he knows that his base is deeply aroused by the prospect of punishing Latinos and Muslims for daring to come to America at all -- and he enjoys it too. Graham trying to tug at Trump's heartstrings over the Dreamers didn't have anywhere near the allure of Stephen Miller feeding his bloodlust.

Hard as this is to believe, it was during the week of mourning for Graham's alleged hero, with the president behaving like a petulant child, that Graham decided to bust out and become Trump's greatest defender, signaling that he is prepared to fight for him with everything he has.

According to the New York Times, Graham invited Ivanka Trump and Jared Kushner to McCain's funeral, apparently after asking the senator's widow, Cindy McCain, if she would mind. It's hard to imagine that she didn't mind, considering all the ugliness emanating from the White House, but apparently she allowed Graham to use the funeral to advance his own status with the family.

Last Tuesday, in the midst of all the grieving and accompanying hoopla over Trump's misbehavior, Graham appeared on the president's favorite show, "Fox & Friends," and inexplicably said this:

Word of caution to the public who are trying to convict the president -- don't move so fast. I've seen no evidence of collusion after two years. Mueller is looking at it, we'll see what he says. But plenty of evidence of corruption at the DOJ and FBI, should be stunning. Not one Democrat seems to care.

It's true that the Democrats don't care about those allegations, mostly because they are utter nonsense. Meanwhile, the whole world has seen evidence of collusion, among other things, starting with Donald Trump Jr., Jared Kushner and Paul Manafort meeting at Trump Tower with Russian government emissaries who promised to help Trump win the election. What we don't know yet is whether or not it rises to the level of a conspiracy and if there's more than we've seen. This naked pandering to Trump -- who watches that show religiously -- on that day was clearly designed to reassure the president that Graham will now work has his wingman in the Senate.

This is not the first time Graham has told the press that he is convinced the Justice Department and FBI corruptly tried to swing the election to Trump. Indeed, one suspects that Graham is one of Trump's primary validators in this absurd narrative, both in person and on Fox News. Just to take one example, last April he appeared with Maria Bartiromo on Fox Business News and called for a special prosecutor to investigate the DOJ and FBI handling of Hillary Clinton's emails.

The way they conducted the investigation was a joke, the thumb was on the scale. The head investigator by the FBI hated Trump, liked Clinton. They were trying to come up with an insurance policy to make sure that Trump didn’t win the election.

Last month Graham upped the ante, calling for two special prosecutors, one to investigate the ongoing national crisis of Hillary Clinton's emails from nearly a decade ago and the other to probe the FISA process that led to the surveillance of Carter Page, the former Trump adviser who has been a suspected spy since 2012. Graham reiterated all of that on his "Fox & Friends" appearance during the McCain funeral flap last week and added this:

They had a bias against Trump for [Hillary] Clinton. . . . They gave a politically corrupt document to get a warrant. . . . Christopher Steele was on the payroll of the Democratic Party. Russia was involved in our election . . . in terms of developing this dossier. No American would get the same treatment she did. If you were charged or suspected of this kind of misconduct, you would be in jail now.

The panel didn't close their eyes, join hands and chant "no collusion," "witch hunt" and "lock her up" in prayerful tribute to Trump. But you know they wanted to.

On CNN on Sunday, Graham made it clear that he wanted "the public" to know that if he becomes the chairman of the Senate Judiciary Committee in January he plans to hold hearings on all this stuff: the Clinton emails, the DOJ and FBI's alleged corruption, the supposed FISA abuse. Knowing that the House will likely flip and Democrats will be holding hearings on the massive corruption and malfeasance of the Trump administration, Graham has apparently decided that his best move is to validate the right's alternate reality. Perhaps he'll invite Alex Jones and the QAnon people to provide evidence.

Graham is not a Trump TV talking head like Steve Doocy or Jeanine Pirro. He's a skilled, experienced lawyer and politician. He knows that everything he said is a putrid pile of rotting baloney. It is Trump sycophancy on a scale we expect from Tea Party back-benchers in the House, not from a senior senator who allegedly molded himself in the image of John McCain, who thought so little of  Trump that he refused to allow the president to attend his funeral. After all these years, Graham is still not ready to spread his wings and be his own maverick. As his new hero might say: "Sad!"