Kissinger Is at It Again 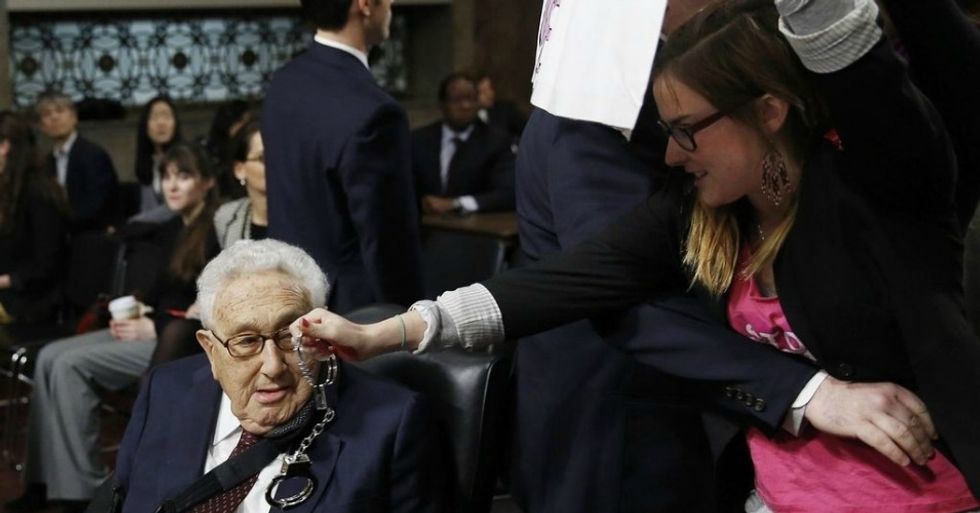 Henry Kissinger spoke at Senator John McCain’s funeral. He said that McCain was one of those rare public servants who understood duty and honor. He believed that McCain embraced America’s power and its ideals, holding each dearly to his chest. This, for Kissinger, is the mark of a true leader.

Of course, Kissinger was really talking about himself. The 95-year-old Kissinger, former National Security Advisor and Secretary of State in the Nixon and Ford administrations, also recalled that he had met McCain in Vietnam in 1973 when the naval pilot was released by Hanoi after more than five years as a prisoner of war. “I had been in Hanoi that day and they had offered to let me take him on my plane back to the United States and I refused on the grounds that nobody should get special treatment,” Kissinger remembered. This simple act, Kissinger claimed, saved McCain’s honor. It may well have been the one thing that Kissinger got right during his lengthy negotiations with the Vietnamese.

Despite his enormous reputation as a statesman, Kissinger’s lasting legacy is the failed Vietnam peace negotiations that earned him a Noble Peace Prize. He has polished his image as a foreign policy expert since the end of the war by using his intelligence, charm, and wit to recast his time in office. Kissinger is almost consumed by his need to remain at the center of the foreign policy world.

One of Kissinger’s gifts is his ability to be self-effacing and self-critical enough of his own time as a public official to hide his actual record and accomplishments. Given Kissinger’s role in the failed peace agreement, it is surprising that the nation still turns to him for answers to its most intractable problems. Instead of listening to Kissinger’s sage advice, we should remember that he is among those most responsible for the debacle in Vietnam. He prolonged the war unnecessarily and doomed the government of South Vietnam. Examining his record based on words and deeds should provide some insight into how not to succeed in a war and how best to mislead the public. With all the problems facing the United States today—from Iran to North Korea, China, Russia, and now Turkey, and a potential confrontation in the Artic, we should not listen to Henry Kissinger again.

Here is why. When Kissinger entered the Nixon White House in 1969, he was full of confidence that he, and he alone, could figure out the Vietnam puzzle. Others had failed to properly balance military attacks with diplomacy, he argued. But he thought he had the magic formula, deduced from years of study if not practical experience. He possessed the arrogance and hubris of someone new to office.

Once in power, Kissinger quickly convinced Nixon to send him secretly to Paris to meet with high-ranking Vietnamese Communist officials to end the war honorably. Peace with honor had to meet several essential conditions. There had to be a lasting cease-fire between North Vietnam and South Vietnam. Laos and Cambodia also had to be neutralized. North Vietnam had to recognize the Demilitarized Zone as an international boundary. All prisoners of war, including McCain, had to be released following the signing of a peace agreement. There would be a mutual troop withdrawal from South Vietnam. Finally, the Saigon government had to be left in full political control of South Vietnam. To achieve these goals, Kissinger promised to wage a war for peace.

But where has there ever been a successful war for peace? Only someone distantly removed from the fighting and dying would embrace such a flawed concept. And this is exactly what Kissinger did. He was the most outspoken advocate inside the administration for the bombing of Laos and Cambodia; he championed the renewed bombing of North Vietnam and the mining of Haiphong harbor. He thought he could use super power diplomacy to force Hanoi to make compromises in Paris. When Defense Secretary Melvin Laird called for US troop withdrawals, Kissinger complained. Kissinger never understood that his desperate actions, made alone and without consultation with the State and Defense Departments, actually reduced his future policy options because he squandered the administration’s remaining good will with Congress. With each new military escalation that he supported, Congress and the American public pushed back, speeding up the US troop withdrawals and shortening the time Saigon had to stand on its own. Ever conscious of wanting to deliver a peace agreement to Nixon before the 1972 US presidential election, Kissinger often supported policies that put America’s South Vietnamese allies in jeopardy. And he did all of this without consulting US allies in Saigon.

When the final peace agreement was concluded in January 1973, Kissinger had not accomplished any of his stated goals, despite prolonging the war. He failed to establish a lasting cease-fire between North and South Vietnam. He failed to neutralize Laos and Cambodia (both would fall to the Communists before Hanoi’s tanks rolled into Saigon in April 1975). He failed to make the Demilitarized Zone an international border. And most importantly, he failed to secure a mutual troop withdrawal from South Vietnam, sealing Saigon’s fate. Kissinger’s actions also led to greater domestic unrest as he failed to contain opposition to his policies. Through newly released documents at the Nixon Presidential Library, we can also finally see the many ways that Kissinger failed the president by overstating progress in Paris and the likelihood for success following the military strikes he supported.

Kissinger’s Vietnam record makes clear that he has rested on unearned laurels for far too long. We should not let him use McCain’s funeral to insert himself once again into a national conversation on foreign policy.