This is the Kavanaugh Confirmation Endgame 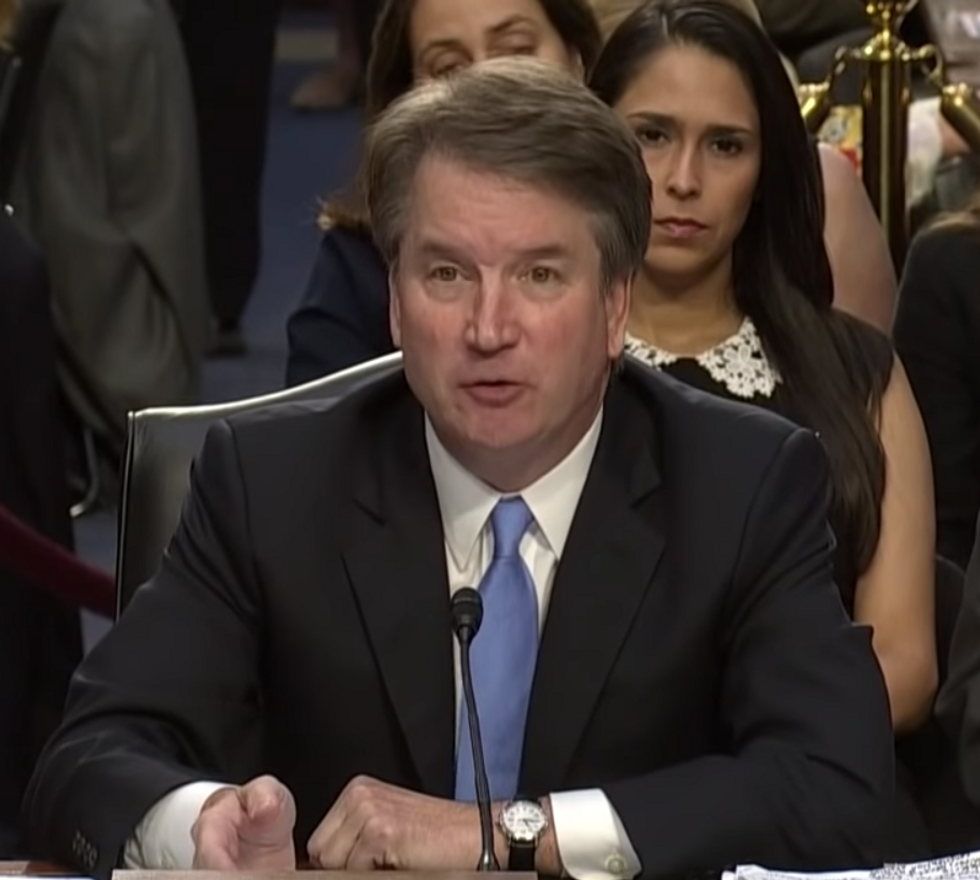 It looks like the last cat is out of the bag.

In a sworn statement Julie Swetnick says she “attended well over ten house parties in the Washington, D.C. area during the years 1981-1983 where Mark Judge and Brett Kavanaugh were present.” Among other allegations, she states “I also witnessed efforts by Mark Judge, Brett Kavanaugh and others to cause girls to become inebriated and disoriented so they could then be ‘gang raped’ in a side room or bedroom by a ‘train’ of numerous boys. I have a firm recollection of seeing boys lined up outside rooms at many of these parties waiting their ‘turn’ with a girl inside the room. These boys included Mark Judge and Brett Kavanaugh.”

She also says she was herself unknowingly drugged “using Quaaludes or something similar” and gang-raped at a party in 1982 “where Mark Judge and Brett Kavanaugh were present.”

The book is now closed on who Brett Kavanaugh is.

Swetnick’s statement sets up a crisis of conscience for Kavanaugh, for Senate Republicans and Democrats, and ultimately for voters of both parties as well.

Kavanaugh has responded as he always has, by doubling and tripling down. He says categorically that neither Blasey Ford nor Swetnick is correct. About the Ford allegations he wrote to the Senate committee: “I drank beer with my friends, usually on weekends.  Sometimes I had too many.  … [But] I never did anything remotely resembling what Dr. Ford describes.” About accusations against him submitted to the Judiciary Committee Kavanaugh said, “This is ridiculous and from the Twilight Zone. I don’t know who this is and this never happened."

Yet who can believe him at this point? The self-styled long-suffering virgin of Georgetown Prep has painting himself into a corner with every denial, and those who support him have consistently blocked investigation. This screams “guilty” even to the deaf.

Republicans now have two choices. They can withdraw the nomination or brute-force it through the Senate anyway. The reason for withdrawing it is obvious, but Republicans don’t respond to reason or even to conscience. They respond to power. Channeling Adam Clayton Powell, Mitch McConnell earlier told Republican voters to “keep the faith.”

“In the very near future, Judge Kavanaugh will be on the U.S. Supreme Court,” McConnenll bragged. "So, my friends, keep the faith. Don’t get rattled by all this.  We’re going to plow right through it and do our job.”

I see nothing in the latest news that says they've changed their stance. As with Merrick Garland, so with Brett Kavanaugh. If power lets Republicans take what they want, they will take it. The process of confirming Kavanaugh will continue.

Republican intransigence puts Democrats in a tough position, caught between a rock and a hard place — or between a conservative and a progressive place.

On the one hand, Democratic leaders still want to leave conservative senators Manchin, Donnelly and Heitkamp a path to vote yes on Kavanaugh. Jonathan Martin wrote in the New York Times that “for three of the most moderate Senate Democrats — Heidi Heitkamp of North Dakota, Joe Manchin III of West Virginia and Joe Donnelly of Indiana — the nomination represented an opportunity for them to vote yes on Judge Kavanaugh and demonstrate independence from their party [to their home state voters]” (emphasis added). They’re still not willing to play the strongest cards they have.

On the other hand, Democrats are increasingly under pressure — from women, from progressives, from people who can’t stomach any more rape revelations — to unite to deny Kavanaugh a seat on the Court.

Nevertheless, Democratic leaders still seem to be leaving the decision to individual senators, and Manchin and Donnelly are publicly still on the fence. From Politico just before the Swetnick news came out:

The two biggest wild cards remain Manchin and Sen. Joe Donnelly (D-Ind.). Both are paying close attention to how GOP Sens. Lisa Murkowski of Alaska and Susan Collins of Maine vote, according to one person familiar with their thinking. … “They have let us know that their states are still with Kavanaugh,” said one Democratic senator.

The endgame is thus at hand. As the floor vote approaches, look for Republicans to take the temperature of their caucus and their base, then take Manchin’s and Donnelly’s temperature. If Manchin and Donnelly are still “undecided,” even after the Swetnick news has been digested — and if their caucus has no rogue votes against him — look for Republicans to bring the nomination to a vote next week, and damn the consequences.

Without Democratic leadership pressure, nothing internal to the process will keep Manchin and Donnelly from voting to confirm Brett Kavanaugh. Without a united Democratic vote against him, Collins and Murkowski will have no crisis of “conscience” at all and confirmation is assured.

As it stands today, if Kavanaugh’s nomination reaches the Senate floor, the only force that can block it is the American public. What Joe Manchin, Joe Donnelly, Susan Collins and Lisa Murkowski care most about is their seats. If public pressure and revulsion are great enough to threaten their election, will they vote to confirm Brett Kavanaugh anyway?

We’re about to find out.