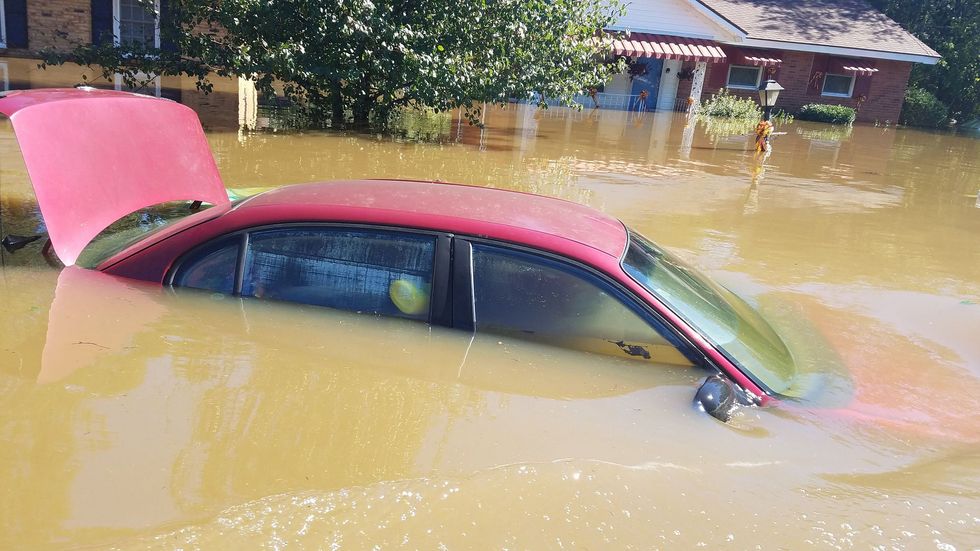 Call it “The Great Stall.” Hurricane Florence lingered over the Carolinas for four days, dumping some 30 inches of rain. Flood waters are still rising, even as Typhoon Mangkhut, a superstorm 500 miles across, rakes the Philippines, Hong Kong and crashes into China. Florence is just the latest in a long series of catastrophic events generated by stalled weather patterns -- slow-moving systems which occur when one of the jet streams that flow around the Earth pinches off a massive section of air from normal wind flows for an prolonged period of time. The National Oceanic and Atmospheric Administration (NOAA) has compiled a long list of severe weather events in the US, and most of them are linked, in one way or another, to stalled weather systems.

Just in the past few months, NOAA has reported that “wildfires are burning larger and more intensely than before,” and that “unusually persistent harmful algal blooms” are plaguing Florida. The Western US is baking under high temperatures, while the Eastern US is “getting increasingly soggy.” NOAA has even reported that land areas in 2017 “recorded more than 60 days of extreme daytime heat worldwide, nearly double the 1961-1990 average.”

Whether it’s record heat, torrential rain or slow-moving currents, stalls can be catastrophic. Last year, Hurricane Harvey stalled out over Houston, dropping as much as 60 inches of rain in some areas and inflicting an estimated $125 billion in damages on the area.

Just last month, one of the leading climate research institutes, the Potsdam Institute for Climate Impact Research, cautioned that the warming of the Arctic is “messing” with the giant airstreams that encircle the Earth and contributing to a slowdown in weather patterns in the mid-latitudes. As Dim Coumou, an Institute researcher, noted just a few weeks ago, these changes in airstreams can, together with other factors, create “extreme extremes.”

So long as the stalls continue to worsen, so will the resulting extremes. Hurricane Florence may be a sign, just as Hurricane Harvey was last year, of worse things to come. Meteorologists are now projecting that Florence could dump up to 18 trillion gallons of water on North Carolina before it moves out of the state.

The growing frequency of extreme weather events is not a matter of bad luck; it is bad environmental policy made manifest. Nature, as it turns out, imitates politics. The critically needed political momentum has stalled, and politicians contribute to stalling weather patterns by stalling on climate change action.

Despite the 2015 Paris climate agreement, officially ratified in November 2016, we have yet to reach “global peaking” of greenhouse gas emissions. Global energy-related carbon emissions rose to a record high of 32.5 gigatons in 2017. With the Trump administration’s repudiation of the Paris agreement and India and China’s continued reliance upon coal, the hope of keeping the rise in global temperatures to less than 2 degrees Celsius—let alone to 1.5 degrees—is rapidly fading.

The Environmental Protection Agency (EPA) has proposed rules that would give states far more leeway in regulating carbon emissions from coal-fired plants. Market forces will continue to reduce the US’s reliance upon coal-fired plants, but the proposed rule, if adopted, would almost certainly slow the rate at which such plants are retired. The EPA also just announced rules that would roll back regulation of methane emissions from the natural gas industry.

But it’s not just the US that is stalling on curbing emissions. After declines in 2015 and 2016, the International Energy Agency reported earlier this year that global demand for coal rose 1 percent in 2017, principally due to rising demand in Asia.

Population growth and rising consumer demand for energy are working against us. The United Nations projects that the world population will increase nearly 50 percent, from 7.6 billion today to 11.2 billion by the end of the century. At the same time, the size of the world’s middle class and resulting resource consumption will likely expand at an even faster rate.

Political action is urgently required. Renewable energy is economically competitive in many parts of the globe, but unless the world’s political leaders—not just Trump—take steps to close down outdated fossil fuel plants, efforts to curb greenhouse gas emissions will fall far short of what is required to avoid more extreme extremes.

It is widely believed that Republicans in Congress are gradually awakening to the reality of human-induced climate change, and there are encouraging signs in China that the political leadership in response to domestic concerns about pollution will, at long last, get serious about curbing carbon emissions from coal-fired plants. But before long, it may be too late.

Stalls, whether political or meteorological, can be costly, dangerous, even life-threatening. It’s time to break the “great stall” on climate change.

This article was produced by Earth | Food | Life, a project of the Independent Media Institute, and originally published by Truthout. Reprinted with permission.