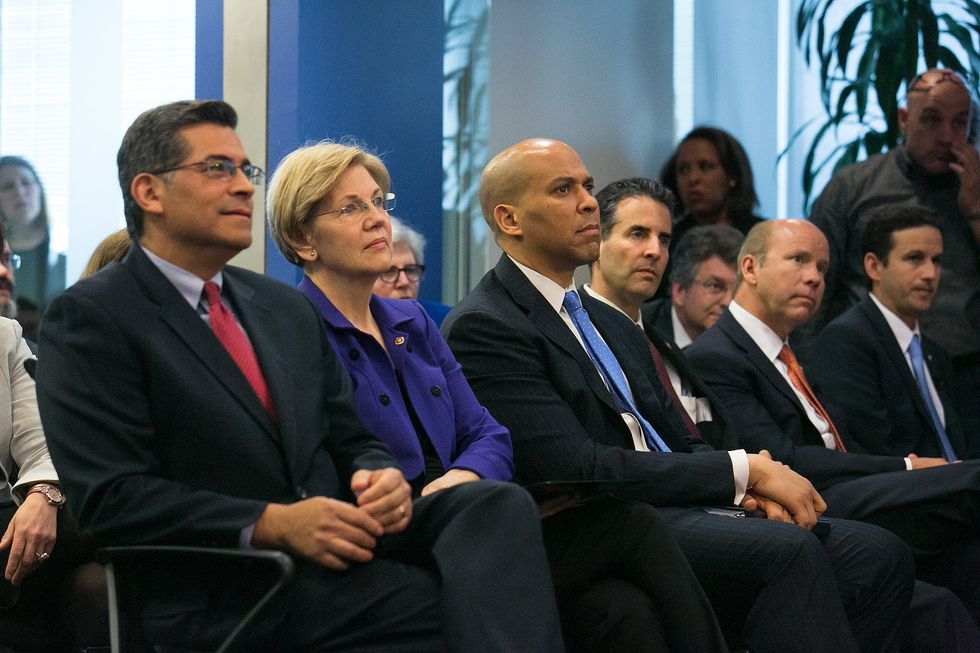 6 April 2016 - Washington, D.C. - Secretary of Labor Thomas E. Perez discusses the Conflict of Interest Rule at the Center for American Progress with (from left to right) Congressman Xavier Becerra; Senator Elizabeth Warren; Senator Cory Booker; Congressman John Sarbanes.Congressman John Delaney (Panelist); ..***Official Department of Labor Photograph***.Photographs taken by the federal government are generally part of the public domain and may be used, copied and distributed without permission. Unless otherwise noted, photos posted here may be used without the prior permission of the U.S. Department of Labor. Such materials, however, may not be used in a manner that imply any official affiliation with or endorsement of your company, website or publication..Photo Credit: Department of Labor - Alyson Fligg
Thomas Neuburger
,
Common Dreams
and
Thomas Neuburger
September 07, 2018 The Right Wing

The resignation of Justice Anthony Kennedy set fire to the political world. It hands Republicans a second straight Supreme Court nomination, threatens numerous important judicial precedents and foreshadows a world of pro-corporate, anti-civil liberties “rule from the bench” lasting well into the next generation. When the president nominated the radical rightwing jurist Brett Kavanaugh to replace him, those threats became real and Democrats were put in a bind.

How strongly should they oppose him? Should they go all out, or lick their wounds and move on?

If Kavanaugh is confirmed, the radical right will have a stranglehold on the Court for the next 15 years at least. Nancy MacLean, author of a must-read book on the Koch brothers network, calls Brett Kavanaugh a “Koch-selected justice” and says they want governmental changes “so radical as to be called a ‘constitutional revolution.’”

People correctly fear that Roe v. Wade will be overturned, but Roe is just one vulnerability. The Roberts Court has done great damage already — from Citizens United to Heller, which created an constitutional right to be armed, to Clapper v. Amnesty International, a catch-22 denial of the right to fight secret wiretapping, to restrictions on voting, joining lawsuits, forming unions, and on and on.

These are just the tip of the iceberg though. Future decisions by a radical-majority Court may be terrifying to contemplate, but the right has considered them already.

For example, prior to 1937 the Supreme Court led by Republican Chief Justice Charles Evans Hughes issued a number of rulings that declared New Deal laws unconstitutional. Then, after FDR threatened to “pack the Court” with up to six additional justices, the Hughes Court reversed its stand and began approving New Deal legislation, a change that created our present constitutional agreement and the modern regulatory state.

Those earlier rulings, though they are never cited, still stand. To pick just one, in Schechter Poultry the Court held that Congress could not delegate its regulatory power to the Executive Branch. If the next Court starts citing Schechter, as Neil Gorsuch did from the bench just two years ago, the regulatory state itself — hated by the Koch brothers and all other rightwing ideologues — could be pulled completely apart.

Changes this sweeping would indeed be revolutionary, yet voters are already in a state of near-revolt — witness the electoral rebellion of 2016 in which people of both parties strongly rejected their leaders and elected the last “change candidate” (or so they thought) available to them. Bipartisan anger since then has only increased. It’s not wrong to say the nation is a powder keg, but it’s not yet a lit one. What response might even more radical changes, crafted by a small but arrogant minority, enforced from a captured, unelected bench, cause in this country? Would it not light a fuse to that powder?

So what should Democrats do? Should they block this nomination with every power they have? “We should have shut down the Senate,” said Sen. Brian Schatz, referring to the lost Merrick Garland fight and the subsequent Gorsuch nomination

Yet just as before, Democratic leaders are again reluctant to be bold, even refusing to rein in their pro-Kavanaugh colleagues. Just recently, in fact, Senate minority leader Chuck Schumer allowed seven Federalist Society-approved lower-court nominees to be fast-tracked to the bench. According to Bloomberg, the deal was cut to help “vulnerable red-state incumbents” — exactly those Democrats most likely to cross the aisle and vote to confirm Brett Kavanaugh. The contrast with Republican treatment of President Obama’s judicial nominees could not be more striking.

The problem for Democratic leaders is clear. If Democratic votes put Kavanaugh on the Court, the nation will be harmed irreparably, and Democrats will not only be complicit, they will be seen to be complicit, risking even further abandonment by the young and first-time voters they must inspire.

Yet even if they act with strength, is there a way to win?

It’s this: First, if Republicans don’t agree to table the nomination until 2019, every Democratic senator but one will boycott the Senate chamber for the rest of the year. Then the one remaining Democrat, a rotating position, will rise to deny unanimous consent on every matter the Senate tries to take up, including each quorum call. This means all 50 Republicans (with the passing of John McCain) must be in or near the chamber on any day Republicans wish to do business.

They could still win every vote they want to win — 50 Republicans and one Democrat does constitute a quorum — but the price would be high. No single Republican senator could stray far from the chamber on days the Senate was in session — she could not go home, fundraise outside of DC or lunch with lobbyists away from the Capitol. Business as usual would end, and only votes Republicans deemed crucial could pass. The life of a Republican senator would drastically change.

That’s quite a trade. Would they take it just to confirm Brett Kavanaugh? Perhaps, but that’s not certain. Republicans may well balk if Democrats hold strong. A former top Democratic aide, recommending something similar, says that withholding unanimous consent would “grind the Senate to a halt” just by itself. Couple that with mass Democratic absence and the tables are turned — it’s Republicans who are in a bind.

Even if Democrats execute this perfectly though, and Kavanaugh is confirmed, they will nonetheless prove that the “constitutional revolution” his confirmation guarantees — which even Republican voters will come to hate — is entirely of Republican doing. That will pay Democrats dividends down the road, in the same way that being complicit could cost them dearly.

This is the nation’s best shot at avoiding disaster. Despite protests to the contrary, the path is available.