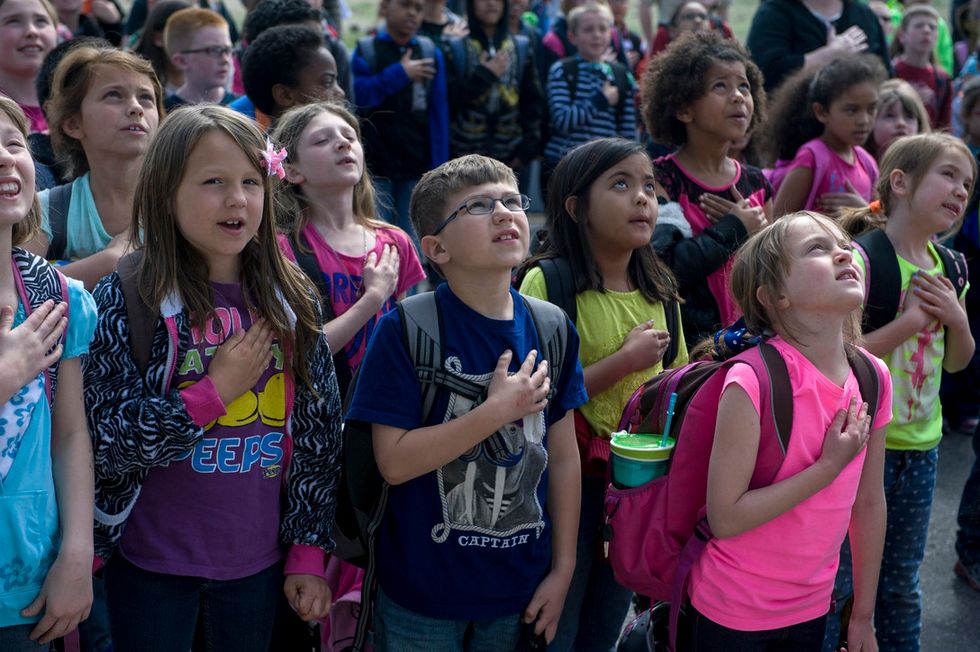 When a California school principal called controversial quarterback Colin Kaepernick an “anti-American thug” for his protests during the national anthem at NFL football games, passions were inflamed anewover whether patriotism should be taught in America’s schools.

As our new book “Patriotic Education in a Global Age” demonstrates, such debates are longstanding in American history.

Seventy-five years ago, at the height of America’s involvement in World War II, the U.S. Supreme Court handed down a decision in West Virginia State Board of Education v. Barnette that guaranteed public school students’ right to refuse to stand in patriotic salute.

Barnette’s origins go back to the late 19th century, when patriotic societies such as the Grand Army of the Republic – a Civil War veterans’ organization – and the Woman’s Relief Corps – the organization’s women’s auxiliary – launched a campaign to place a flag in every public school classroom. “The reverence of schoolchildren for the flag should be like that of the Israelites for the Ark of the Covenant,” the organization’s commander-in-chief William Warner enthusiastically declared at a rally in 1889.

Three years later, in 1892, the schoolhouse flag movement received a huge boost when The Youth’s Companion – one of the nation’s first weekly magazines to target both adults and their children – hired minister-turned-advertiser Francis Bellamy to develop promotional strategies to commemorate the 400th anniversary of Columbus’ voyage to America. Bellamy’s national Columbus Day program involved assembling millions of students at their local schools to recite a pledge in salute to the American flag. The magazine profited from flag sales leading up to the event. The United States didn’t have an official pledge of national loyalty, however. So Bellamy composed his own: “I pledge allegiance to my Flag and the Republic for which it stands, one nation, indivisible, with liberty and justice for all.”

Over the course of the next 40 years, the pledge underwent three revisions.

The first occurred almost immediately following the Columbus Day celebration when Bellamy, unhappy with the rhythm of his original work, inserted the word “to” before “the Republic.” Between 1892 and the end of World War I, this was the 23-word pledge that many states wrote into law.

Over time, schools adopted the revision. Finally, in 1954, after the federal government included the pledge as part of the U.S. Flag Code during World War II, Congress reacted to the so-called godless communism many believed was infiltrating U.S. public institutions by adding the phrase “under God.”

Throughout the early 20th century, states across the nation passed laws that required student recitation as part of a morning flag salute so that by the time the United States plunged into World War I against Germany in 1917, pledging allegiance to the flag had become the standard beginning to the school day.

This explains why, in October 1935, 10-year-old Billy Gobitas and his 11-year-old sister Lillian were expelled from school after they refused to salute the flag. As Jehovah’s Witnesses who believed that venerating the flag violated God’s prohibition against bowing to graven images, the Gobitas family argued that the flag salute infringed the children’s First Amendment rights.

The Supreme Court eventually heard the case Minersville School District v. Gobitis – a misspelling of the respondent’s surname – and decided for the school district. “We are dealing with an interest inferior to none in the hierarchy of legal values,” Justice Felix Frankfurter wrote for the court’s 8-1 majority, as France was overrun by Hitler’s army: “National unity is the basis of national security.”

Controversy ensued. Throughout the country, newspapers reported on debates over the flag salute.

Acts of violence were committed against the Jehovah’s Witnesses. These included beatings acts of arson and even a case of tar and feathering.

At least partly because of the public’s reaction to the decision, the court agreed to hear another case that involved the flag salute just three years later. This time the case was brought by the families of seven Jehovah’s Witness children expelled in Charleston, West Virginia. Surprising many, the justices decided 6-3 in favor of the families and overruled Gobitis.

On Flag Day, 1943, Justice Robert Jackson delivered the majority opinion in West Virginia State Board of Education v. Barnette. “If there is any fixed star in our constitutional constellation, it is that no official, high or petty, can prescribe what shall be orthodox in politics, nationalism, religion, or other matters of opinion, or force citizens to confess by word or act their faith therein,” Jackson declared. “If there are any circumstances which permit an exception, they do not now occur to us.”

Although the Barnette decision held that students could not be forced to recite the Pledge of Allegiance, the pledge has remained a mainstay of U.S. public education. Meanwhile, parents continue to oppose the pledgeas a violation of their children’s constitutional rights.

Consequently, legal challenges persist. One of the most recent cases challenged inclusion of the phrase “under God” in the pledge. In this case – Elk Grove Unified School District v. Newdow – the court did not rule in the matter because the plaintiff who brought the suit lacked standing. Since the case did not address the underlying issue of religious freedom, future challenges are likely.

Similarly, Barnette did not address other pledge-related questions, such as whether students need parental permission to opt out of the flag salute. Cases that address this question, among others, continue to be pursued.

Whatever unresolved issues may remain, Barnette established as a matter of constitutional law and fundamental principle of American public life that participation in rituals of national loyalty cannot be compelled. The Supreme Court that rendered that decision clearly understood that non-participation can be well-motivated and should not be construed as a sign of disloyalty or lack of patriotism. The court was also clearly troubled by the vicious attacks on Americans who exercised their constitutional right not to participate.

We should be equally troubled now when we see public school leaders harshly condemn Colin Kaepernick – or any protester, for that matter – for how they choose to exercise their constitutional right to demand equal liberty and justice for all. Kaepernick decided to take a knee during the national anthem to protest police brutality against African-Americans. The question we would pose to Kaepernick’s critics is this: How is taking a knee to affirm our country’s highest ideals anti-American?