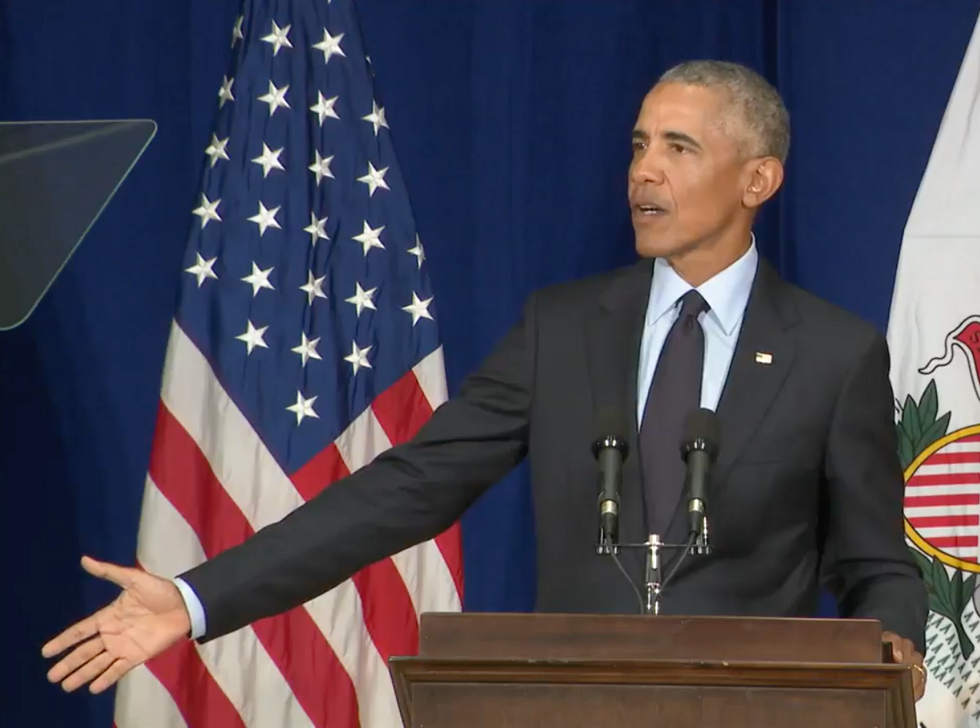 Barack Obama blasted President Donald Trump and the Republican Party as hypocrites and radicals in a scathing speech at the University of Illinois.

The former president condemned his successor and the GOP for obsessively undoing his accomplishments and upending the international order, all while stoking fear and prejudice.

These are nine of Obama’s most withering attacks.

1. “What happened to the Republican Party? Its central organizing principle in foreign policy was the fight against communism, and now they’re cozying up to the former head of the KGB. (They’re) actively blocking legislation that would protect our elections from foreign interference. What happened?”

3. “The claim that everything will turn out okay because there are people inside the White House who secretly are not following the president’s orders?” Obama said. That is not a check — I’m being serious here — that’s not how our democracy is supposed to work. These people aren’t elected, they’re not accountable. They’re not doing us a service by actively promoting 90 percent of the crazy stuff that’s coming out of this White House, and then saying, ‘Don’t worry, we’re preventing 10 percent.’ That’s not how things are supposed to work. This is not normal.”

4. “It should not be Democratic or Republican — it should not be a partisan issue — to say we should not use the attorney general or the Justice Department as a cudgel to punish our political opponents.”

6. “It did not start with Donald Trump. He is a symptom, not the cause. He’s just capitalizing on resentments that politicians have been fanning for years.”

7. “When you hear how great the economy’s doing right now, let’s just remember when this recovery started. I mean, I’m glad it’s continued, but when you hear about this economic miracle that’s been going on, when the monthly job numbers come out, Republicans say, ‘It’s a miracle.’ I have to remind them and say those job numbers are the same as they were in 2015 and 2016.”

8. “The politics of division and resentment and paranoia has unfortunately found a home in the Republican Party. This Congress has championed unwinding of campaign laws to give billionaires outside influence over our politics. Systematically attacked voting rights to make it harder for young, minorities and the poor to vote. Handed out tax cuts without regard to the deficit, slashed the safety net wherever it could. Cast dozens of votes to take away health insurance from ordinary Americans. Embraced wild conspiracy theories like those surrounding Benghazi or my birth certificate, rejected science, rejected facts on things like climate change, embraced a rising absolutism, from a willingness to default on America’s debt by not paying bills, to a refusal to even meet, much less consider, a qualified nominee for the Supreme Court because he happened to be nominated by a Democratic president. None of this is conservative.”

9. “We have the chance to restore some semblance of sanity to our politics.”