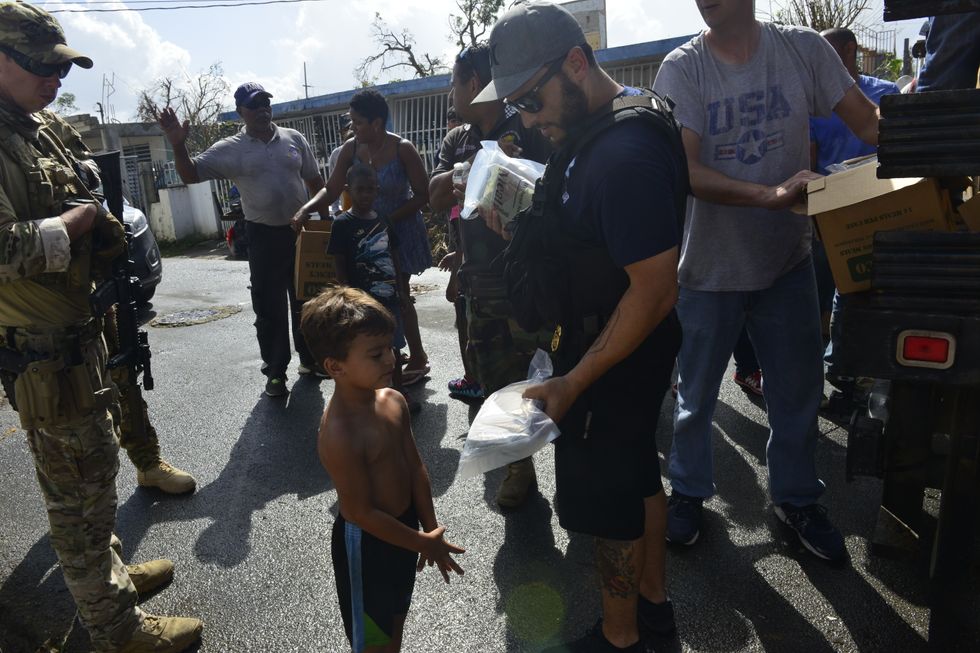 President Donald Trump is very fond of the term “fake news,” which is how he views any media coverage that isn’t consistently favorable to his presidency. To Trump, Breitbart and World Net Daily are legitimate news outlets, while CNN, MSNBC and the New York Times are providers of “fake news.” And Trump regards mainstream media coverage of Hurricane Maria’s path of destruction in Puerto Rico as a classic example of fake news—including reports that the Maria-related death toll on that island was much higher than originally thought.

In December 2017—three months after Hurricane Maria devasted Puerto Rico—Puerto Rican officials reported that 64 people had died on the island as a result of Maria. But in late August, the Puerto Rican government (including Gov. Ricardo RosellÃ³) announced that the death toll was much higher: 2,975 people, which is an estimate based on extensive research by George Washington University. And Trump, on Twitter, has been insisting—despite the obvious evidence—that the figures are a fabrication and that the death toll wasn’t nearly as high. In a September 13 tweet, the president posted, “3000 people did not die in the two hurricanes that hit Puerto Rico. When I left the Island, AFTER the storm had hit, they had anywhere from 6 to 18 deaths. As time went by, it did not go up by much. Then, a long time later, they started to report really large numbers, like 3000.”

Here are five Trump critics who have had angry reactions to the president’s clueless remarks on Puerto Rico’s death toll.

1. Gov. Ricardo A. RosellÃ³: Trump Is Exploiting a Tragedy for ‘Political Purposes’

After Trump denied that almost 3000 people died in Puerto Rico as a result of Hurricane Maria, Puerto Rican government officials—having witnessed the devastation first hand—were indignant, including Gov. Ricardo A. RosellÃ³. In an official statement, RosellÃ³ declared, “We strongly denounce anyone who would use this disaster or question our suffering for political purposes. I ask the president to recognize the magnitude of Hurricane Maria and continue working with my government to ensure a full recovery of the American citizens of Puerto Rico.”

2. Rep. Ileana Ros-Lehtinen: Trump Might Have Reached a ‘New Low’

In the Republican Party, the pressure to blindly support President Trump regardless of what he says or does can be intense—especially if a senator or representative is seeking reelection in the 2018 midterms. But Cuban-born Rep. Ileana Ros-Lehtinen, who isn’t seeking reelection this year, has been among Trump’s frequent critics on the right. And she was quick to respond to Trump’s tweets on Puerto Rico’s death toll, declaring that the comments “might be a new low. Boy, that’s saying something…. How could you be so self-centered and try to distort the truth so much?” Ros-Lehtinen also said that it takes a “warped mind” to “turn this statistic (of 2975 deaths) into fake news.”

When CNN contributor Ana Navarro criticizes Trump, his supporters typically try to paint her as a Democratic Party operative. But the Nicaragua-born Navarro, in fact, is a right-wing Republican who worked closely with Jeb Bush (when he was governor of Florida) and the late Sen. John McCain. And Navarro has been absolutely livid about Trump’s recent claims that the 2975 death toll in Puerto Rico is merely a Democratic Party fabrication. This week on CNN, Navarro fumed, “How stupid, how tone deaf, how surreal, how insensitive, how offensive—just, you know, how wrong in every single way.”

The Miami-based Navarro has noted, “There are Puerto Ricans who moved to Florida who could actually make or break statewide elections in Florida in 2018,” stressing that if Floridians are “mad as hell” about Trump’s comments, they can express that anger by voting in the midterms on November 6.

Democratic Rep. Diana DeGette, who has been representing Colorado in the U.S. House of Representatives since 1997, visited Puerto Rico after Hurricane Maria—and she has asserted that the destruction she saw was by no means fake news. On Twitter, DeGette posted, “Nearly 3000 Americans died in #PuertoRico and #USVI, but #Trump chooses to belittle this tragedy I saw firsthand. He should be working with Congress to strengthen #Maria rebuilding efforts and prevent future failures. Instead, he insults the memory of the storm’s victims.”

Trump has maintained that the Hurricane Maria-related death toll in Puerto Rico was no more than 18, and Wired contributor Adam Rogers has stressed that Trump’s claim is not only “preposterous” and “worse than a lie”—it is also anti-science. In a September 13 article, Rogers noted that the research methods George Washington University used in Puerto Rico were totally scientific and asserted, “In dismissing the conclusions of well-conducted research on the toll in Puerto Rico, the president is doing more than insulting the memories of the dead. He risks breaking a connection forged during the Enlightenment, at the foundation of democracy: the link between governance and knowledge.”