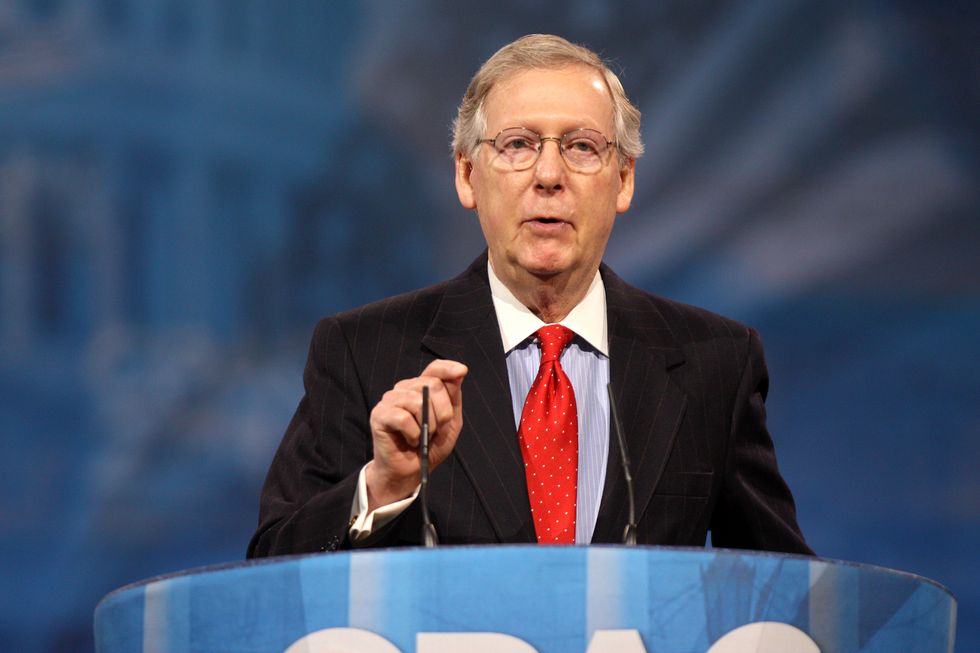 When news broke that Christine Blasey Ford—a 51-year-old professor of psychology at Palo Alto University in Northern California—had accused Supreme Court nominee Brett Kavanaugh of attempting to rape her at a party back in 1982, many of the responses were fair-minded and even-handed. A long list of people have stressed that while Kavanaugh hasn’t been convicted of anything, they definitely want to hear, in detail, all that Ford has to say—especially in light of the fact that Kavanaugh is up for a lifetime appointment on the highest judicial body in the United States.

But on the far right, some wingnuts have been quick to either demonize Ford or turn her accusation into a Republicans-versus-Democrats argument. Kavanaugh is their guy, the GOP is their party—and Ford’s accusation, they immediately assume, is nothing more than a Democratic conspiracy.

Here are five of the most appalling reactions to Ford’s accusation that have come from the far right.

As Senate majority leader, Kentucky’s Mitch McConnell has been a ruthless, vindictive partisan whose top priority is sticking it to Democrats—not the wellbeing of the country. And he made that abundantly clear when, after learning that Ford had accused Kavanaugh of attempted rape, his knee-jerk response was to attack Sen. Dianne Feinstein (the top Democrat on the Senate Judiciary Committee) rather than wanting to hear what Ford has to say. McConnell views Ford’s allegation in strictly partisan terms, faulting Feinstein for not coming forward with the information she had on Ford and Kavanaugh sooner. But Ford, at first, had requested anonymity. And McConnell, always a Republican first and an American second, fumed, “Now, now, at the 11th hour, with committee votes on schedule—after Democrats have spent weeks and weeks searching for any possible reason that the nomination should be delayed—now, now, they choose to reveal this allegation.”

After Ford decided to reveal her identity, it didn’t take Donald Trump, Jr.—vice president of the Trump Organization—long to begin ridiculing and belittling her. In an Instagram post, the president’s 40-year-old son posted a mock “letter” that was written in crayon and labeled “Judge Kavanaugh’s sexual assault letter found by Dems.” The mock “letter” read, “Hi, Cindy, will you be my girlfriend? Love, Brett,” with boxes for checking either “yes” or “no.” And in a mocking tone, Trump, Jr. said of Kavanaugh, “Oh, boy, the Dems and their usual nonsense games really have him on the ropes now.”

3. Matt Drudge, Grabien News Attack Kavanaugh Accuser by Confusing Her With Someone Else

Matt Drudge’s The Drudge Report attempted to smear Ford on Twitter by linking to a hit piece on her that had originally been published by Grabien News. In the article, Grabien tried to paint Ford as a bad professor who had received a lot of negative online reviews from her students. One of the reviews, posted on RateMyProfessor.com on September 25, 2014, said, “Christine Ford is the worst educator I have experienced. Avoid taking her class and avoid any interaction with this person.” But the Christine Ford in that review is Christine A. Ford, a licensed social worker who taught at California State University, Fullerton—not Kavanaugh’s accuser Christine Blasey Ford, who is employed by Palo Alto University. In fact, Fullerton is in Orange County south of Los Angeles, and is well over 300 miles from Palo Alto. Grabien has since retracted the inaccurate story that the Drudge Report was so quick to promote.

4. Women for Trump’s Amy Kremer: Democrats Want to ‘Gin Up the Hysteria Machine’

Republicans had no problem with Sen. Feinstein when, in late 2017, she demanded Democratic Sen. Al Franken’s resignation in response to sexual harassment allegations. Franken didn’t get a pass from Feinstein simply because he was a Democrat: Feinstein wanted him to step down, party affiliation be damned—and the Minnesota senator resigned. But the minute Feinstein has legal concerns about a Republican Supreme Court nominee, Republicans view her as a one-woman hit squad.

During a September 17 interview with CNN’s Chris Cuomo, Amy Kremer (co-founder of Women for Trump) had the same knee-jerk reaction to Ford’s accusation as McConnell: she viewed it in strictly partisan terms, insisting that Democrats are trying to “gin up the hysteria machine” with a “dog and pony show.” Kremer also asserted that there should be no public testimony from Ford, only closed-door hearings—which is ludicrous. Considering that Ford is making a very serious accusation and that Kavanaugh, if confirmed, could still be on the Supreme Court 30 years from now, anything the Palo Alto University professor has to say on the matter should be heard publicly.

5. Joe Walsh Attacks Democrats for Waiting to ‘Drop This Dirt’

Even former Rep. Joe Walsh (a Tea Party wingnut) called Donald Trump, Jr. out for mocking Christine Blasey Ford, correctly denouncing him as an “uncaring, narrow-minded idiot” on Twitter. But Walsh, like McConnell and Kremer, has turned Ford’s accusation into an opportunity to play partisan politics, posting on Twitter, “So Dems waited until the very last minute to drop this dirt, and now they want to wait again to hear from her? You don’t think they’re trying to drag this thing out, do you?”

Walsh likes to see himself as a law-and-order man, but when a Republican Supreme Court nominee is accused of attempted rape, it’s all the Democrats’ fault, in Walsh’s mind.