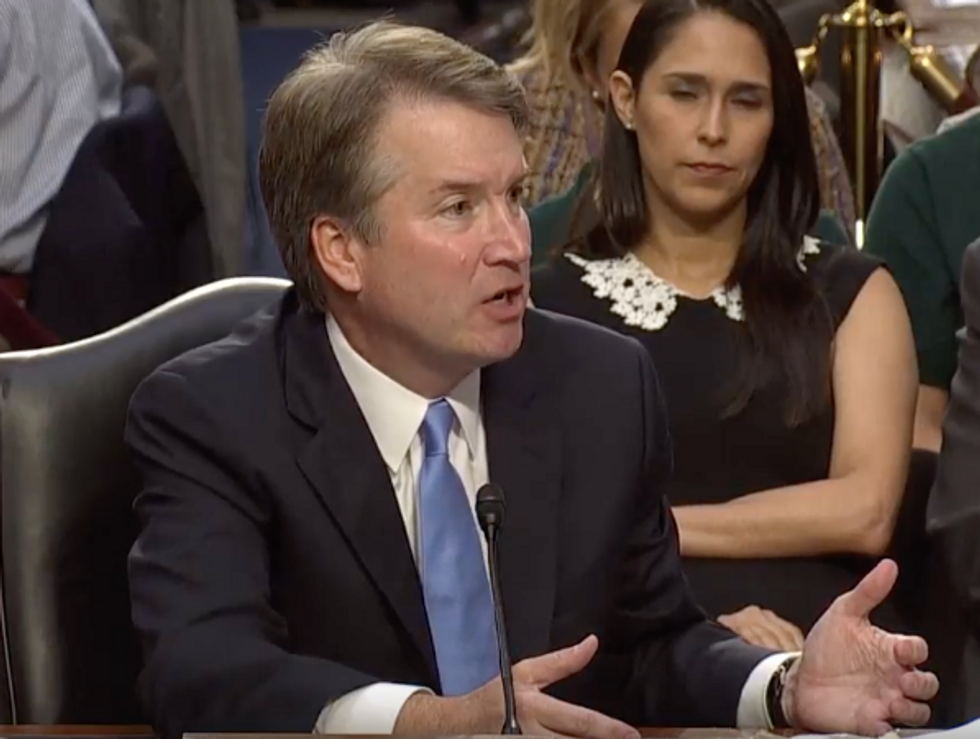 It's not longer a hypothetical: Brett Kavanaugh lied under oath to Congress in 2004 and 2006. That's just from the tiny number of documents that have been released on his record so far.

In 2004, in sworn testimony, he told Sen. Ted Kennedy that while he was shepherding nominations for George W. Bush that he was "not involved in handling" Bill Pryor's nomination. Documents made public Thursday include, among other things, an email from June, 2003 inviting Kavanaugh to attend an "emergency umbrella meeting" at a private law firm "to discuss nominee Bill Pryor's hearing." That's only the first of several of Kavanaugh's emails from 2002 and 2003 discussing Pryor's nomination, as both Sens. Patrick Leahy and Dianne Feinstein have been quick to point out.

Why is his work on the Pryor nomination such a touchstone issue? Pryor was the guy who called Roe v. Wade "the worst abomination in the history of constitutional law." No wonder he lied about that in his own confirmation hearing. NB: Susan Collins and Lisa Murkowski.

Leahy goes on to lay out the full picture of Kavanaugh's lies—that we know of so far—in a tweet thread, including questionable statements by Kavanaugh this week. He told Leahy "he never received any docs that even 'appeared to … have been drafted or prepared by Democratic staff,'" when Leahy tweets, he had "8 pages of material taken VERBATIM from my files, obviously written by Dem staff, LABELED 'not [for] distribution.'" Leahy has many expamples of such emails in that thread, information sent to Kavanaugh clearly marked as highly confidential. As Leahy concludes "Judge Kavanaugh answered under oath more than 100 questions on this hacking in 2004 and 2006. His repeated denials that he didn't receive any stolen info and didn't suspect anything 'untoward' is SIMPLY NOT CREDIBLE."

The problem is that now we have an email from Kavanaugh to John Yoo, then with the Justice Department, dated September 17, 2001 asking "Any results yet on the [4th amendment] implications of random/constant surveillance of phone and email conversations of non-citizens who are in the United States when the purpose of the surveillance is to prevent terrorism/criminal violence?" Which definitely suggests that Kavanaugh was indeed participating in the formulation of this policy. Kavanaugh was slightly cagier on Wednesday when Leahy asked about whether if he ever worked with Yoo, the torture memo author "on the constitutional implications of any warrantless surveillance program." Kavanaugh was definitively more dithery on the issue this time around. "I can't rule that… right in the wake of September 11? […] It was all hands on deck on all fronts." So that's a maybe. But it still means he was probably lying under oath in 2006.

There's even yet more, though apparently still confidential. In questioning Kavanaugh Thursday, Sen. Dick Durbin (D-IL) said that there are at least three specific examples in which Kavanaugh participated in discussions about the Bush administration's detainee and torture policy. In 2006, Kavanaugh denied, under oath, that he had been involved in that policy-making.

This is a bad, bad nominee. We knew that from an ideological perspective already. Now we know it because this is a guy who will commit perjury to advance his career. He's quite possibly going to get a lifetime appointment on the highest court in the land and his is an out-and-out partisan lawyer who was neck deep in war crimes in his last political job.