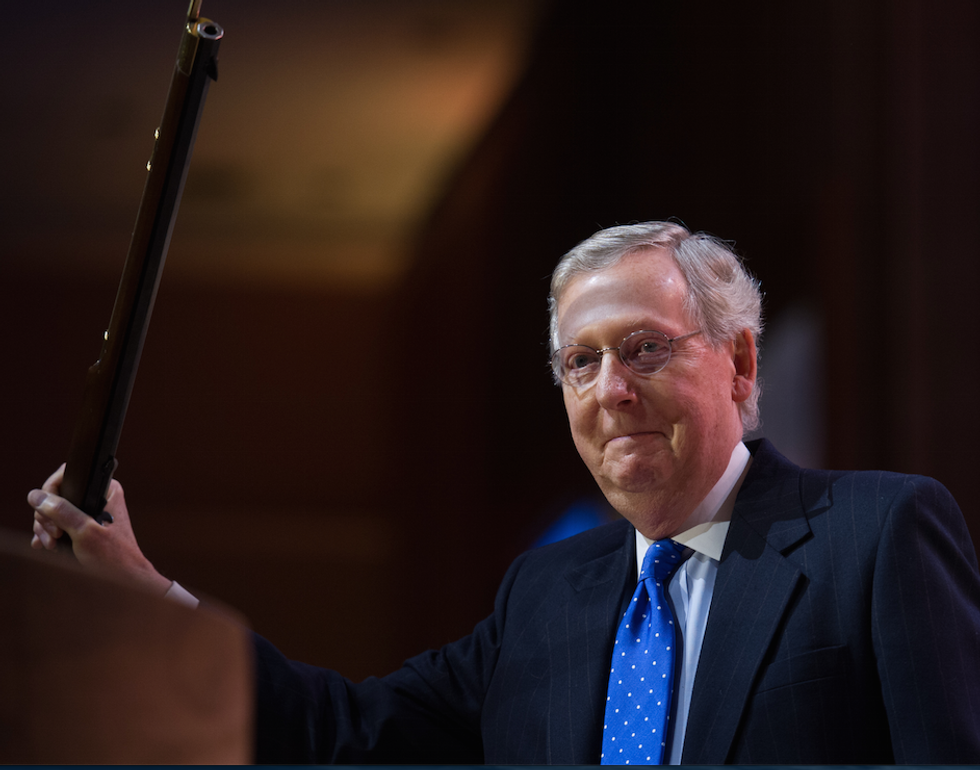 On Thursday, Media Matters For America reported that Everett Corley, the GOP nominee for Kentucky's 43rd State House District, has been involved in white nationalist circles.

In 2014, Corley — who that year ran unsuccessfully for the same district — appeared on The Ethno State, a broadcast of the white supremacist American Freedom Party. During that broadcast, he complained to the host, white supremacist activist William Johnson, that "if you’re a minority you can belong to all these groups that champion your ethno-background but you certainly [have] very little to do as a European or a Caucasian American."

But one of the most bizarre points of discussion was Senate GOP Leader Mitch McConnell's interracial marriage to Elaine Chao, who currently heads the U.S. Department of Transportation.

In response to Johnson's claim that McConnell's marriage means he "is taking a stand that will destroy the white race," Corley replied that while he agreed "we should maintain our people and our culture," his marriage "is not my problem" because it is a "marriage that has not born any children or anything. That’s simply a marriage of companionship."

Mitch McConnell is one of the most widely detested politicians in America, but his marriage to a Chinese-American woman is hardly a good reason for that. Bizarrely, though, McConnell's marriage has increasingly cropped up as a point of attack in GOP politics — most notably in the failed West Virginia Senate campaign of former coal mining baron and convicted criminal Don Blankenship, who blasted McConnell's father-in-law as a "wealthy Chinaperson."

The American Freedom Party, founded as American Third Position, is a minor political party created by skinheads in Southern California. Its leaders, including Johnson, advocate designating the United States as a white country under law, abolishing the citizenship of all nonwhite people, and ultimately deporting them from the country. The group actually nominated a ticket for president in 2016 featuring anti-"White Genocide" activist Bob Whitaker, but later abandoned it to support the candidacy of Donald Trump.

The Republican Party of Kentucky lists Corley prominently among the list of candidates running for office in the state. Additionally, in his previous run for office, he was supported by Papa John's founder John Schnatter, who recently resigned in disgrace amid his own racism scandal.

And Corley is not an aberration. The number of overt white supremacists running for office as Republicans this year is alarming.

Two neo-Nazis have actually won Republican nominations for congressional seats — Arthur Jones in Illinois, and John Fitzgerald in California. Another House nominee in New Jersey, Seth Grossman, was abandoned by the GOP after he called diversity "a bunch of crap" and a series of his viciously racist Facebook posts were uncovered. And Virginia Republicans nominated Corey Stewart for Senate, despite his neo-Confederate activism and links to the white nationalists behind the Charlottesville demonstrations.