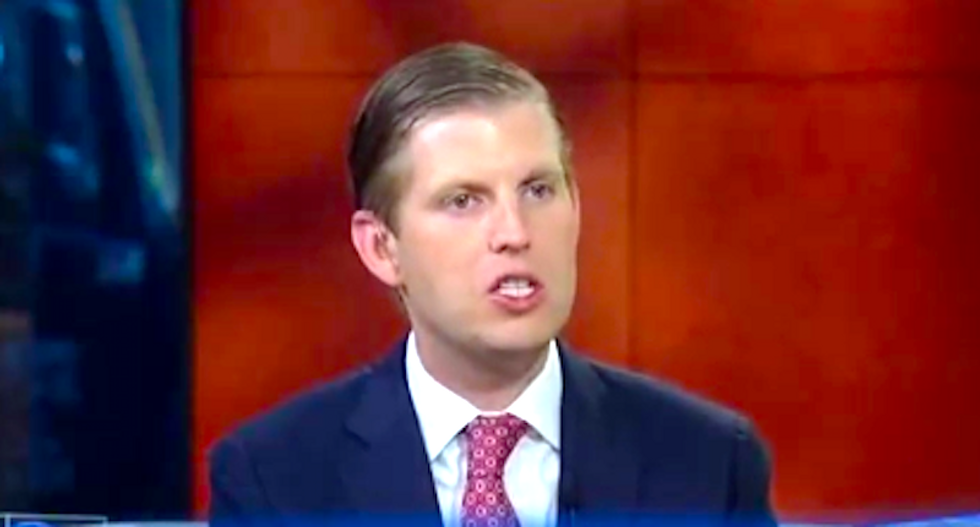 Eric Trump, the son of President Donald Trump, was fact-checked Thursday by Republican-friendly Fox News after he mischaracterized the health of the economy under former President Barack Obama in order to play up his father's record.

After Eric Trump went on to claim that factories were coming back to the U.S., that markets were "breaking every record," that 401Ks are "through the roof" and that consumer confidence has hit an all-time high, co-host Dave Anthony felt the need to interject and correct Trump.

"It's true consumer confidence has hit around a 17, 18 year high in its recent gauge," Anthony pointed out. "It's true the stock market had hit a lot of records after your father took office despite predictions it would take. However, when you say it's the fastest growing economy we've ever had, that isn't really the case, because economic growth of the low 4 percents is just what we've had in the last quarter. And there’s hope that that would continue."

"But you have to be fair," he continued. "Even during the Obama administration, while he did have some very low growth in quarters, there were times that he got over 5 percent in economic growth and over 4 percent more than once."

Eric Trump immediately became defensive. "In all fairness, we're twenty months into this thing," he shot back. "You think we're getting four percent . . . I don't actually think he had 5 percent quarters."

"He did," Anthony pointed out. "He had a 5 percent quarter."

"Alright, I would go back and check that very carefully," Trump replied.

Later, the program reviewed the facts and determined that there had been four occasions during Obama's presidency when the economy grew by more than 4 percent in a quarter, including one in 2014 when it grew by 5.1 percent.

The interview was also noteworthy, because Trump repeated his line that Woodward's book was just intended to earn "shekels" – a term that many have accused of being coded anti-Semitism, according to The Washington Post.

This is not the first time this week that a member of the Trump clan has been called out by Fox News for fudging the facts. When President Donald Trump tweeted that "the GDP Rate (4.2%) is higher than the Unemployment Rate (3.9%) for the first time in over 100 years," Fox News Research wrote that "since 1948, there have been 63 quarters with a GDP growth rate higher than avg quarterly unemployment rate."

Fox News has generally been considered to be a reliably pro-Trump network, which makes their need to correct Trump-ian distortions about the economy all the more remarkable.