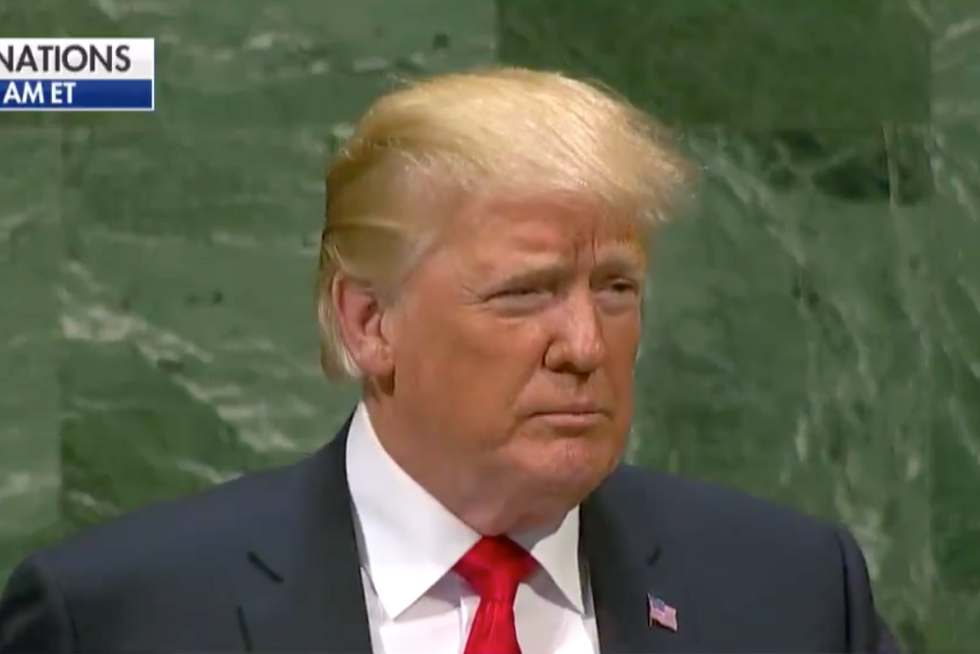 In the world of Fox News, President Donald Trump is always winning, and the only people to oppose him are sore-loser Democrats. But to maintain this fantasy, the people at Fox — which still pretends to be an objective news outlet — often have to omit key facts or even manipulate reality in order to hide the president's obvious failings.

A startling example of this muddying of the waters was on display Tuesday on the Fox News Twitter account, which is followed by more than 18 million people.

As is typical, Fox News tweeted out clips of Trump's speech Tuesday morning to the United Nations General Assembly. At one point in the speech, Trump boasted about his presidency, ridiculously claiming, "In less than two years, my administration has accomplished more than almost any administration in the history of our country." In response to this unnecessary and egregious claim, the audience of world leaders burst into laughter.

“So true,” Trump said, and more laughter broke out. “Didn’t expect that reaction, but that’s OK.”

But if you were following along on Fox News' Twitter feed, you didn't see this stunning and humiliating moment of Trump becoming a laughing stock before the entire world. Instead, Fox tweeted a video that abruptly cuts off right as Trump said, "the history of our country," removing the laughter entirely from the short 11-second clip, as Wahington Post reporter Aaron Blake pointed out.

The following video, which is over a minute long, picks up from right after the laughter ended and as Trump began bragging about the U.S. economy. Watch the two clips below:

.@POTUS: “In less than two years, my administration has accomplished more than almost any administration in the his… https://t.co/rOnaFpN5vD
— Fox News (@Fox News)1537886678.0

While news agencies choose how to edit clips and which clips to promote all the time, there is no reasonable justification for editing the speech in this way. Many outlets ran stories and posted tweets specifically showing the United Nations laughing at Trump, which is a notable and undoubtedly newsworthy event.

The only reason a network would edit out the most interesting and newsworthy part of a speech — while preserving the most mundane and factually dubious political boasts from a notoriously deceptive president — is if its objective is to be an instrument for the ruling party's propaganda.