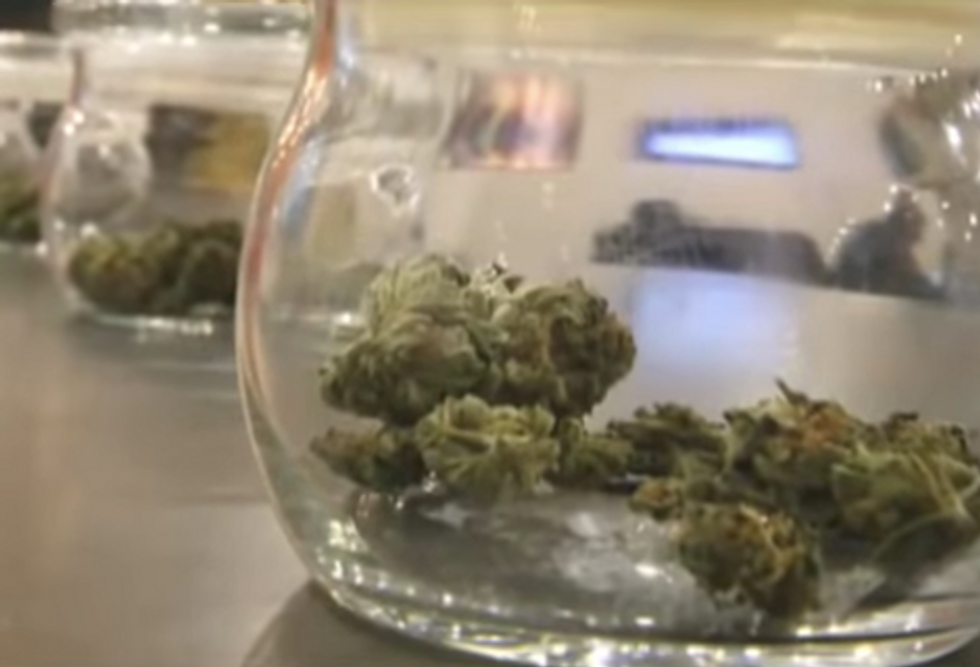 Nine states and the District of Columbia have legalized marijuana since 2012, but all of those states have been in the West or the Northeast. This year, with marijuana legalization on the ballot in Michigan as well as North Dakota, legal weed could make a heartland breakthrough.

Similarly, medical marijuana’s rise to acceptance continues, and this year, Missouri and Utah look set to join the ranks.

Two of these states—Missouri and North Dakota—also have incumbent Democratic senators up for reelection in tough campaigns this fall. Whether voters motivated by marijuana could help Claire McCaskill and Heidi Heitkamp retain their seats remains to be seen, but pot at the polls will generate interest among more liberal voters.

We could see New Jersey move quickly and legalize weed via the legislature sometime in the next two months, but barring that, it looks like we'll see at least one, and quite possibly two, new marijuana legalization states come election day and, most likely, two more medical marijuana states.

The initiative looks well-positioned to win in November. A February poll had support for legalization in Michigan at 57 percent, while a March poll came in at 61 percent. The most recent poll, from May, had support holding steady at 61 percent. Those are the kinds of polling numbers initiative and referendum experts like to see at the beginning of the campaign because they suggest that even with the inevitable erosion of support in the face of opposition attacks, the measure still has a big enough cushion to pull off a victory.

That there are three separate measures on the ballot could lead to some confusion. If multiple ballot measures on the same topic pass, the one with the most votes generally prevails. But because in this case two of the measures are constitutional amendments and one is a statutory measure, if the statutory measure gets more votes than either of the amendments, but at least one of them passes, it could be up to the state's court system to figure out which goes into effect.

While there is nothing stopping voters from voting "yes" on all three measures, there are also concerns that the multiplicity of options could result in splitting the pro-medical marijuana vote, with some voting "yes" on only one measure and "no" on the others. In this election, when it comes to medical marijuana, Missouri may have too much of a good thing.

The winds of change are blowing across the northern prairies. Just two years ago, North Dakota voters approved a medical marijuana initiative, and this year, a grassroots group, Legalize ND, managed to get enough signatures to get Measure 3, the Marijuana Legalization and Automatic Expungement initiative, on the November ballot.

This is a radical initiative. It would legalize all forms of marijuana for adults by removing marijuana, THC, and hashish from the state's controlled substance schedules, and it sets no limits on the amount of marijuana people could possess or how many plants they grow. It also provides for the automatic expungement of criminal convictions for anyone convicted of a marijuana-related crime that would be legal under the measure.

North Dakota is a deep red state—Donald Trump got more than twice as many votes as Hillary Clinton in 2016—but the only poll done so far has the initiative leading. The June poll, commissioned by Legalize ND and conducted by the Florida-based Kitchen Group, had the initiative winning 46 percent to 39 percent, with 15 percent undecided.

That's good but not great news for Legalize ND. Yes, the initiative is leading, but the conventional wisdom among initiative and referendum watchers is that campaigns should be starting off with at least 60 percent support—the assumption being that inevitable organized opposition is going to eat away at support levels in the final weeks of the campaign.

Under the measure, people who suffer from one of a list of designated qualifying medical conditions could receive a medical marijuana card with a physician's recommendation. That would entitle them to possess up to two ounces of marijuana or any amount of a marijuana product with up to 10 grams of THC. Patients could not grow their own unless they live more than 100 miles from a dispensary. And the patients cannot smoke marijuana.

The measure has received opposition from the Church of Latter Day Saints (Mormons), but even church members don't appear to be heading the leadership on this one. A Utah Policy poll released Tuesday has support for the measure at 64 percent. Among Mormons, the church's active opposition has swayed only "very active" church members, who now narrowly oppose the measure. But "somewhat active" and "former" Mormons both overwhelmingly support it. It looks like medical marijuana is coming to the Land of Deseret.