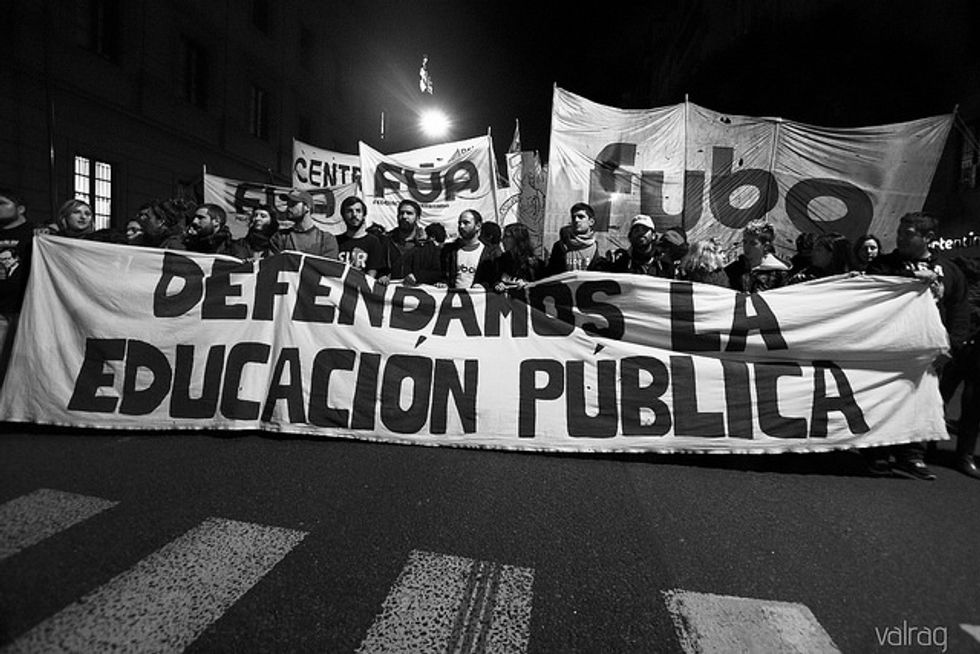 A slogan adorned the walls of the Ecole des Hautes Etudes en Sciences Sociales in Paris, France: The Natural Disorder of the Youth. Another announced, Don’t Mourn ’68, Organize 2018. I had come to Paris to join in commemorations of the 50th anniversary of the events of 1968—the student and worker uprising that was part of a global upsurge from Mexico to Pakistan. FranÃ§oise VergÃ¨s, the scholar from RÃ©union, and I were to speak in the morning. It turned out that the students of Paris were on strike—fighting for their lives to protect education and to build a better society. They insisted that we do our talk for them—in their occupied buildings. And that is what we did.

Somewhere, in the old buildings of Paris’ universities, came the sound of the slogan of 1968—Debout les damnÃ©s de l’UniversitÃ© (Arise you wretched of the University). What the students of 1968 fought for, the students of 2018 are fighting for—and for more. In 1968, the French students said that they would not exchange death by hunger (mourir de faim) for death by boredom (mourir d’ennui), suggesting that hunger was a thing of the past and boredom their fate in the present. But, today, hunger returns. Students are not only frustrated by the lack of opportunities before them once they graduate, but they—buried by debt—are also no longer able to eat or to find shelter. Students from South America to East Asia live in conditions of near poverty, borrowing money to cover fees and working impossible hours to cover their living expenses.

It is hard to be a university student these days. Public finance has dwindled, with state-owned universities under pressure to raise fees, cut benefits and open up sections of their campus to private enterprise. The decline of the state-run university has allowed private-owned colleges to appear, which demand high tuitions in return for a better life. Frederick Brooks De’Poet of Ghana writes of this condition in several of his poems dedicated to the unemployed student:

And he is without freedom….

He is the unemployed graduate

The man whose four years have been wasted on a useless school.

Waste is a strong word. Many students feel close to the subject of the poem. But others want more. They have been on the streets to defend public education and to demand a greater commitment to both public education and to a humane society. Few of their protests are reported in the world’s media. It is as if the media looks at the agitated students and sniffs—your protests are not serious. But, these are some of the most important mobilizations across the planet.

Recently, students took to the streets of Bogota, Colombia, and Mexico City, Mexico. You would not have heard of these demonstrations. The students in Mexico taped their mouths in protest against two silences: silence over the murder in 1968 of three to four hundred student activists at the Plaza de las Tres Culturas (Tlatelolco, Mexico City) and silence over the disappearance in 2014 of 43 students from Ayotzinapa Rural Teachers’ College (Iguala, Guerrero, Mexico). “Being a student in Mexico is more dangerous than being a criminal,” they chanted. In Colombia, 40,000 students protested the cancellation of a program (Ser Pilo Paga, Pays to Be Smart) that brought students from rural areas into the university of their choice. Teachers joined them and held their own demonstration against the evisceration of funding for public higher education. Protests on this same issue run down the edges of South America—from Argentina to Chile.

It has become a clichÃ© of our times—governments, under pressure from bankers, cut the budgets of higher education institutions, which then put the burden on already impoverished students. The project of higher education as the great instrument for social mobility is no longer in place, nor is the assumption that a degree will earn you a better life. Education today would be unrecognizable to people such as John Dewey and Nadezhda Krupskaya, theorists of learning for the greater good. From their very different perspectives—Pragmatism for Dewey and Marxism for Krupskaya—they were united in the hope that education would enhance the social life of human beings. That was the goal. Not to make better workers for the shriveled tentacles of capitalism.

Across the Global South, students with degrees have for decades organized themselves into platforms to campaign against their joblessness. These groups have variations on the same name: Union for Unemployed Graduates (Tunisia), National Association of Unemployed Graduates (Nigeria), Unemployed Graduate Students’ Union (Sri Lanka) and Coalition of Unemployed Graduates (Zimbabwe). These militant students make their desolation into a political fact. Not for them, the self-doubt. They know that their joblessness is beyond them. In Algeria, I learned the word hittiste, a word from wall (hit) that refers to the young men who lean against the wall during the day, many of them with degrees in their back pockets. There is simply no work for them, which means that there is no way for them to pay back the debt that financed their education.

In Santiago, Chile, in 2011, the students put up a sign that acknowledged their own views about education—Con PasiÃ³n por la EducaciÃ³n (Passion for Education). But, these days it is hard for students to study with passion—terrified as they are by the drive to make their university education a pathway to a job that does not exist. Government policy, massaged by the World Bank and think tanks funded by corporations, seeks to make education an arid affair, vocational and professional with little allowance for the development of human beings. Fear of debt and unemployment pushes students toward areas of study that they are told will produce lucrative jobs, which are increasingly unavailable. Governments—bullied by the World Bank and these foundations—have failed their citizens. They can only imagine a world where education is subordinated to the world of jobs.

What does it mean in our time to be young and hopeful? Where can young people talk about ideas and imagine better worlds? Public spaces have increasingly been taken over by corporations, while colleges have been transformed into job factories. This is the enclosure of the mind, the suffocation of humanity. More needs to be fought for—more colleges, more imagination—the natural disorder of youth, a yearning for a world without want.

This report is for Miranda Mendoza Flores (age 18), who was abducted on her way to the Colegio de Ciencias y Humanidades (Plantel Oriente, La Paz, Mexico) on August 21, 2018. Her body was found on the MÃ©xico-Cuautla roadway, burnt. Her death is part of Mexico’s ongoing femicide. It is part of the war against Mexico’s students. It is part of war against young people. The crushing of another flower ready to bloom.

This article was produced by Globetrotter, a project of the Independent Media Institute.
Report typos and corrections to: feedback@alternet.org.
#story_page_post_article