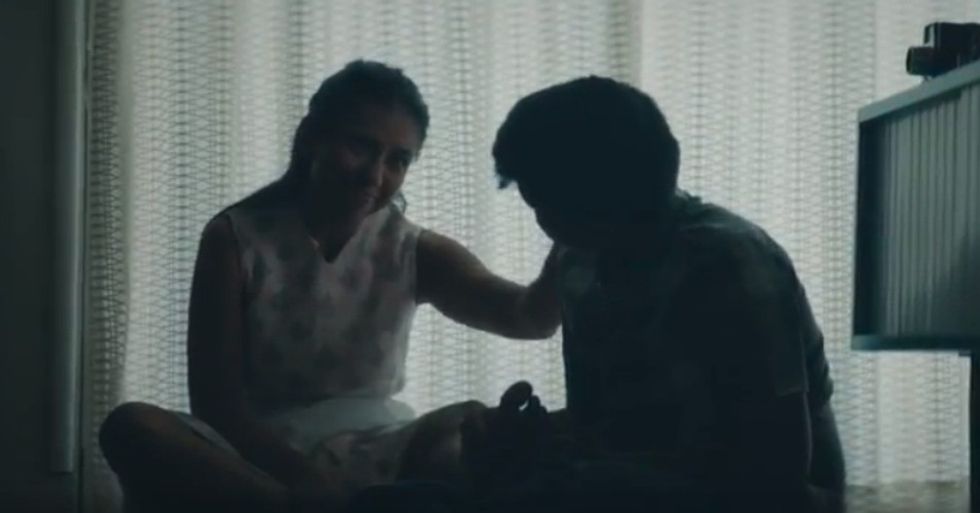 But it's possible that's not necessary, given how striking and powerful it might prove once more people see and decide to share it:

Announcing the new campaign video on Monday, de LeÃ³n urged voters to check out "the story of how my mother risked everything to provide me with the American Dream, and how it almost didn't happen." Separately, he said he hoped people "find watching it as moving as I did making it."

As the HuffPost notes, "The nearly three-minute spot, 'Our Time,' shares the cinematic features of other ads released by progressive insurgents this election cycle. But it's likely to make the biggest waves for the tough shots it takes at Feinstein."

[he] wants to remind Californians of Feinstein’s record of centrist positions not only on immigration, but also on taxes and foreign policy, which he believes show she is out of touch with California voters. Feinstein voted for the wars in Iraq and Afghanistan and for former President George W. Bush’s income and estate tax cuts, and until recently, she supported the death penalty, de LeÃ³n noted. (By 2007, Feinstein expressed regret for her vote to authorize the Iraq War.)

Referring to her 2006 vote for the Secure Fence Act, de LeÃ³n said that Feinstein "voted for a wall before Donald Trump ever started speaking about the wall."

"That's not a critique, those are her votes,” de LeÃ³n said. “It’s an opportunity to introduce myself to the voters of California and allow them to make the choice."

While de Leon and Feinstein are both Democrats, California's nonpartisan, top-two primary system allows for a scenario in which two candidates from the same party can ultimately face off in the general election.

Though Feinstein has held the seat since 1992, de LeÃ³n is challenging the incumbent from the left and, in fact, won the endorsement of the state Democratic Party earlier this summer.

"The ad," de LeÃ³n told the HuffPost, "is an accurate contrast â€• a juxtaposition between our actions and what we do in a position of power to improve the human condition for millions of hard-working folks who deserve to become full-fledged Americans."