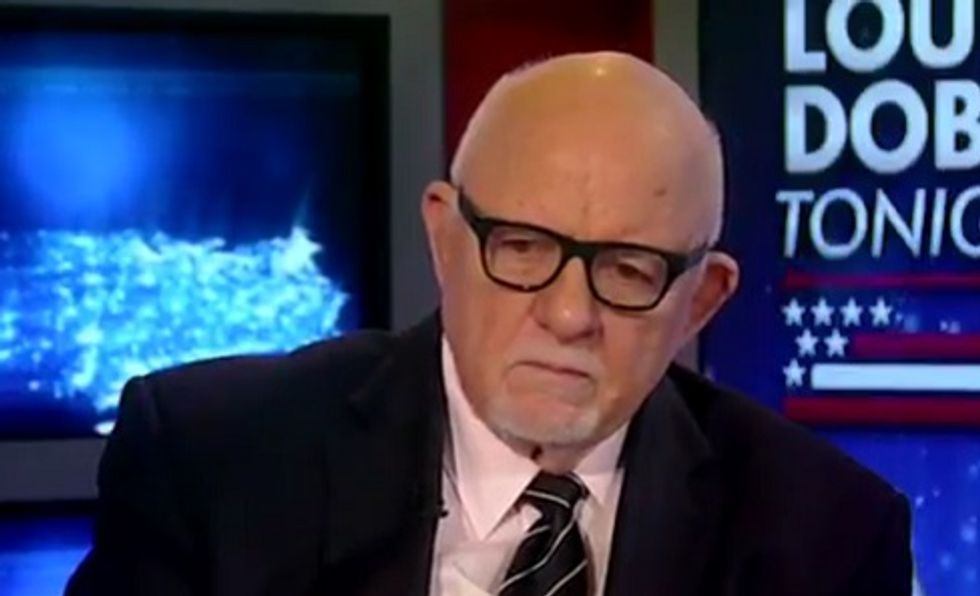 By and large, President Donald Trump's shocking conspiracy theory that an independent report revealing 2,975 hurricane deaths in Puerto Rico was cooked up by the Democrats to make him look bad has not drawn condemnation from the GOP. While a few lawmakers have tepidly disagreed with him, including GOP Florida Senate and gubernatorial candidates Rick Scott and Ron DeSantis, there is no meaningful outrcy from the right.

In fact, over at the Fox Business Network, arch-Trump supporting commentator Lou Dobbs fully agrees with the president, hosting a segment on Thursday about how the Puerto Rico numbers are fudged, which Trump proceeded to retweet.

"Let's turn to another matter of, I think, considerable ignorance, and that is a number of institutions, including academic institutions, whether George Washington University or the Harvard Chan School of Public Policy, coming up with these ridiculous projections of a death count, body count, from Hurricane MarÃ­a," said Dobbs to Rollins. "This is just astonishing. And for two candidates, Rick Scott running for the Senate against Bill Nelson, Ron DeSantis running for the governorship, to sit there and say they just decide against the reality, and against the president, is to me just beyond the pale."

"Well, they had better understand the president's the only — DeSantis would not be on the ticket if it wasn't for the president's endorsement, obviously Scott was the governor," said Rollins. "The reality is that the Democrats are playing to Puerto Ricans who have moved to this country, moved to Florida, politics, and they're not for us anyways. So at the end of the day here, the president is accurate."

He added that he knows what he's talking about because, "I do statistics all the time."

Ed Rollins, on Puerto Rico death toll estimates: "The reality is the Democrats are playing to Puerto Ricans who hav… https://t.co/I1dbJEL9sp
— Brendan Karet 🚮 (@Brendan Karet 🚮)1536883209.0

Leaving aside the obvious fact that people who moved to Florida from Puerto Rico were already in "this country," the study estimating 2,975 dead was commissioned by the Puerto Rican government and peer-reviewed. No one argues that the storm itself killed that many people; most of the deaths in that figure are sick and elderly people who died of preventable causes in the aftermath because they had no clean water, electricity, or health care.

It is completely reasonable to fault the government for those deaths, especially considering Trump's administration rejected or cut short several measures that would have helped, from refusing to let ships deliver supplies, to withdrawing a Naval hospital ship that was treating people, to FEMA letting 20,000 pallets of water bottles just sit unused on a tarmac in Ceiba for a year.

Rollins and Dobbs seem to believe that because the 135,000 Puerto Ricans who have fled to the mainland are unlikely to back their party under Trump, they are entitled to dismiss them and erase their struggle. But that struggle is very real — and it could play a large role in the vote this November.